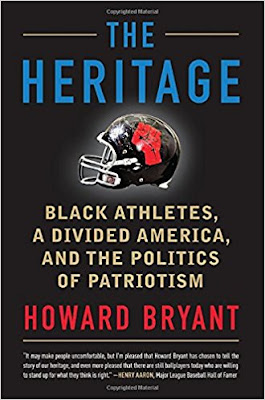 The Heritage: Black Athletes, a Divided America, and the Politics of Patiotism by Howard Bryant (Beacon Press, 2018, 288 pages, $26.95/18.99) begins and ends with Colin Kaepernick, the black American football player who, when he’d had enough, decided to take a knee during the playing of the national anthem before kickoff of his now former team, the San Francisco 48ers in protest against the treatment of young black men at the hands of police across the country. Between these bookends lies a rich history of the political and social involvement of black athletes from the 1920’s to he present. Bryant writes highly readable prose, supported by anecdote and statistics to show the evolution and devolution of the super-stars during three distinct periods. The book is persuasive and interesting. Many people who read it will nod as the book rushes by and cheer at the conclusions. Lots of readers, less inclined to hear and understand, won’t like what they read.

After introducing the problem and model represented by Kaepernick, Bryant takes the reader back to the mid-twentieth century by introducing one of my own musical and political heroes, Paul Robeson, who, as a black student at Rutgers in the 1920’s twice recognized as a consensus All-American football football player and class valedictorian, graduated from Columbia Law School and established himself as an actor, singer (Old Man River and Water Boy), flirted with Communism before being deprived of his passport by the House Unamerican Activities Committee, and became a hero of the civil rights movement before his death in the 1965.

Bryant recognizes black athletes as creating a heritage of advancement and courage in the face of pre-war Jim Crow America and the world of increased opportunity represented by their return to an America changed by World War II and Harry Truman’s elimination of racial discrimination in the armed services. There athletes, represented by the likes of Jesse Owens, Jackie Robinson, Joe Lewis, Jim Brown, Kurt Flood, professor Harry Edwards, Muhammad Ali and others established the place of black athletes to play and to speak out. Many, like Kurt Flood, John Carlos, and Muhammed Ali all sacrificed years of their professional lives as the organized sport and public resistance shortened or ended their careers. Their sacrifices and successes served to pave the way for others.“We had to take care of each other,” former baseball player and manager Dusty Baker said. “There weren’t that many of us. You knew the game didn’t always want you. You had to pass on what you knew, like, prepare the ones that were coming. That was your responsibility.” While sports provided an entree to wealth and fame, black intelligence and thoughtfulness were denied or ignored.

The second era, characterized by Bryan as the period of “Shut up and play!” featured the emergence of superb athletes who were able to dominate their sport, but were, at the same time, willing and able to characterize themselves as virtually race-less. While obviously men of color, their demeanor and dominance of their sport occurred in a time where their salaries as players were dwarfed by their income from product endorsements and public appearances. Athletes like Michael Jordan, Tiger Woods, O,J. Simpson preferred to duck social issues, while living lavish lifestyles and not speaking out on social issues, despite the fact that many able and talented black athletes were not being rewarded in the ways that they the stars,were. Bryant argues, “that for all the money, the players were still black, and the minute any one of them ran afoul of the white mainstream public, either by decline in play or by specifically taking a political stand that advocated for African Americans, that same public would be quick to turn on him.”

Then, two commercial airliners were crashed into the twin towers of the World Trade Center on September 11, 2001 killing 2997 people and the world changed. Patriotism blossomed. The U.S. had eliminated compulsory military service in 1973, and all our armed services were staffed by volunteers. These two events ushered in a period of patriotic fervor eagerly promoted and paid for by professional sports. Policing that increasingly used military hardware and former members of the military to staff its force. Meanwhile, proliferating police illegal shootings and violence against the black community coincided with patriotic celebrations held in stadiums and on playing fields around the country. A new era of resistance to black issues came up against a new voice of African Americans with the money and the self-awareness to speak out on the issues confronting them as they became the majority of athletes in both the NFL and the NBA. Bryant characterizes this period as “The Awakening.” Black athletes’ voices were heard and their money was spent to help speak for them. LaBron James, Carmello Anthony, and, perhaps most visibly, Colin Kaepernick became symbols of the new willingness to speak out and contribute cash to causes. Bryant comments, “The real reclamation is when you decide to get on the bus. Where do you get on the bus? Where will you participate? The question will be, ‘What did you do for the people? What did you do with your wealth? Can I impact the life of a young person when it counts, not when it’s safe?” 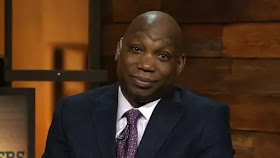 Howard Bryant is a sports journalist and television personality appearing on both the radio and television. He often appears on the ESPN program The Sports Reporters as well as NPR’s Weekend Edtion. He has steadily risen from local beat to national prominence as a reporter and commentator. The Heritage is his fifth book.

Any white reader expecting The Heritage: Black Athletes, a Divided America, and the Politics of Patiotism by Howard Bryant (Beacon Press, 2018, 288 pages, $26.95/18.99) to provide comfort, should be warned. This book, read with an open and attentive mind will make you uncomfortable. Bryant’s narrative is compelling, his story-telling superb, his use of examples cogent and on-point, and the case he builds strong. The nexus of racism, changed definitions of patriotism, courage and avarice, and white complicity to silence the black athlete are difficult or impossible to deny. I highly recommend this book to any reader eager to understand the role of sport within today’s politics and divisions. I was provide the book as a pre-publication download by the publisher through Edelweiss. I read it on my Kindle app.

Please remember that titles I review are linked to Amazon.com and ordering through the links in the text or the  Amazon.com portal on my blog will result in a small commission to me.