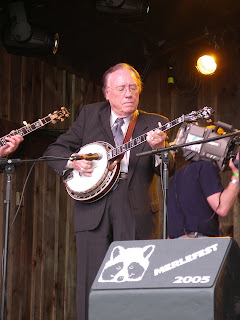 How and why did we get involved in bluegrass? The short version is: we went to Merlefest in 2003 and were hooked on Americana in general and bluegrass in particular. But that's too easy, a facile response for a more complex and nuanced appreciation of a special form of American music. As a child I studied classical violin. No kidding! And I often say, "The violin represents the five most miserable years of my life. I couldn't even tune my own fiddle, because I couldn't hear a fifth, the interval between each of the strings. In high school I picked up a guitar somewhere and played and listened to folk music. My wife taught in a girl's boarding school where one of the students taught her songs by Joan Baez. We bought lots of records and I didn't like rock. Through the years we've listened to classical music, the great pop singers like Frank and Ella and Tony and the others, country greats like Johnny and Willie and Kris Kristofferson and Vince Gill and more. One year we took a trip to the Maritime provinces in Canada and fell in love with the music of Nova Scotia. In other words, we were ripe for the picking, or pickin'.

Merlefest, which takes place during the last weekend of April in Wilkesboro, NC was founded in memory of Merle Watson, the famed Doc Watson's late son, who died in a tractor accident. Over the years it has gone from being a small festival held on a flatbed truck with some bales of hay thrown around to a huge event with around 80,000 total attendance over four days, twelve sound stages, and a great variety of American roots and accoustic music, including lots of bluegrass. We were hooked and we started attending festivals, buying CDs, talking to performers, and playing the music.

Our children think we're nuts and so do our friends. They see the music as hillbilly or simple or unsophisticated or repetititve or dull. Eddie Adcock, one of the great banjo players, says that bluegrass is one of the most difficult forms to master, right up there with jazz and the classical repertoire. It requires intense listening, complete cooperation, and the ability to pick up new music quickly and with style and grace. We admire the musicians we've met and like the people who attend the events we do. Bluegrass fits our lifestyle, too. For most of our life together we've camped in some form or other. When I retired, about eight years ago, we bought a large fifth wheel trailer and went on the road. Most bluegrass festivals are held at campgrounds or in fields where most of the attendees live for the duration of the festival in their RVs. Now we have a much smaller trailer which permits us more easily to fit into the confines of any space at a festival. We listen to the music, we jam with other pickers or listen to the better field pickers play together, and we thoroughly enjoy the experience. In the end, bluegrass suits us just fine.
Posted by Ted Lehmann at 2:59 PM