Richlands H.S. is a pleasant, modern high school building in , about ten miles west and a world away from nearby , the home of where Marines are being trained to head out for . In Richlands there’s no evidence of any stress other than a wrestling match, a couple of boys and girls high school basketball games, and a small bluegrass festival. Sponsored by the Coastal North Carolina Bluegrass Association, this small festival will showcase eight or nine bands over a two day period, a pretty ambitious undertaking for a local bluegrass society. We’ve come to see Lorraine Jordan and her Carolina Road Band but have also been interested to see the Larkins, a family band from . It’s always a pleasure to see local bands, because they remind us the depth of musical talent we encounter as we travel.

We purchase our tickets and sort ourselves out from the basketball and wrestling fans, settling into the comfortable school auditorium after hot dogs and cake supplied by the festival vendors. We also make sure to purchase 50-50 tickets to help support the Society. The Coastal Carolina Bluegrass Society has been around since 1993, holding events at several schools in before settling in at Richlands. Like many local bluegrass societies, Coastal Carolina has struggled to continue in existence, settling for a single two day sponsor supported event held once a year in January. President Rufus Carter proudly says that this year they have 35 sponsors who have contributed enough money to assure the festivals success.

The first band out is a local band, centered in and called th 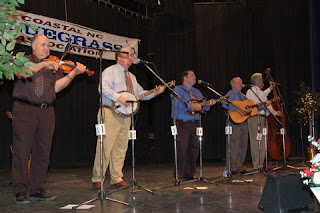 e Grassy Creek Band. While this band plays around the region, I could find no web presence to point to. They were clearly well-known to the audience, which greeted them warmly. They were not, however, well showcased by the sound system, which was still experiencing some glitches during their performance. Thankfully, the sound problems were solved by the end of this set. The band is fronted by Jeff Davis, who plays a good mandolin and has a pleasant tenor voice. He sang a particularly nice version of Kris Kristofferson’s “Darby’s Castle.” A highlight of this group’s set was an instrumental called Cedar Point Shuffle, written by the group’s banjo player. About half the band’s offerings were bluegrass gospel, which was very well received by the audience. Their rendition of “Little White Church” was well done. This is a solid, local cover band, good for opening a concert like this one.

We had checked out the Larkins on their web site and came prepared to enjoy this band. A family band, they feature two blond sisters, whose voices blend very well and who decorate the stage with their playing and clogging. Tina, age 23, plays a very competent mandolin and sings lead as well as carrying most of the MCing chores. Her older sister Shauna, 24, plays fiddle and sings leads and harmony. Their Dad, Lowell, plays rhythm guitar and sings baritone, while Mom, Barbara, plays banjo. Jason Crawford, the only non-family member in the group contributes a solid bass beat. The Larkin sisters have been performing since they were three and four years old and have been on the road for about fifteen years. They have been regulars at Dollywood and have performed at the Grand Ol’ Opry. The Larkins started their set fast and up-beat with “How Mountain Girls Can Love” and “Smokey Mountain Memories.” With their bright blonde hair and wholesome good looks, these two sisters draw a viewer’s attention to them. They have a polished presentation, perhaps too polished. The overall impression of their performance is 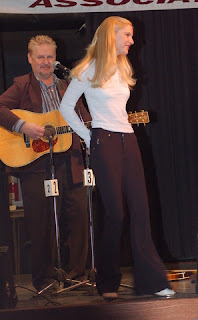 one of packaged show-biz. In bluegrass, this is not a compliment. Tina’s carefully programmed shots at her parents and patter with hand and arm gestures choreographed by a performance packager come across as more slick than authentic, the kind of presentation that may fool folks at Dollywood, but doesn’t go over well here in the real hinterland.

The music heads pretty quickly downhill, too. Mother Barbara picks a version of Foggy Mountain Breakdown that not only isn’t Earl, it isn’t up to contemporary bluegrass standards. The girls do a nice job on the national anthem, “Rocky Top” and follow it with a perfectly awful song called “Jesus, Daddy, and You.” Shauna closes the set with Orange Blossom Special on the fiddle and is overpowered by her sister’s mandolin break. Properly played, OBS should send chills down a listener’s spine as it rounds into the final portion. Shauna invests almost no passion in her mechanical version of this bluegrass standard. Tina announces that they’ll be back for another set the next day, which doesn’t bother us as we hadn’t planned on returning anyway.

As Lorraine Jordan and her band come on stage, I take a deep breath and g 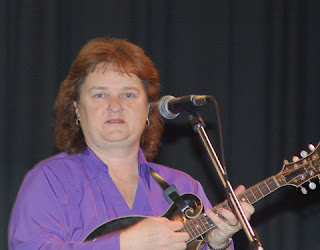 ive thanks that the adults have finally arrived. Lorraine not only fronts her own band, but produced and plays in an IBMA award winning disk called “Back to the Well” with an all women’s group called Daughters of Bluegrass, which won the IBMA Recorded Event of the Year in 2006. For many years bluegrass has had a reputation for being largely a boys club. This excellent recording showcases many of the fine woman pickers as well as singers and songwriters. It is the second of two projects for the daughters.

’s own band has been and its members have been nominated for nine awards by SPBGMA, The Society for the Preservation of Bluegrass Music in , one of the two major national bluegrass organizations. In addition, “Go Back to the Well” from the Daughters album has been nominated as song of the year. ’s own nominations include Entertaining Group of the Year and Entertainer of the Year. All in all, it’s quite an honor to rack up so many well-deserved nominations. Her band has 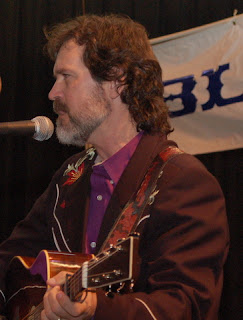 recently been strengthened by the addition of Jerry Butler as lead and rhythm guitarist and singer. Jerry brings first class flat picking as well as amusing musical impressions to the mix, adding a needed element of humor. His rendition of “They’re Laying Eggs Now” added some interesting twists to an old song.

is also a very solid singer/songwriter. Her song “Pickin’ with the Boys” has become a signature song, expressing the pleasure she takes in her band and traveling with them. A new song from her latest album called “” was written for the band by their friend Tom T. Hall. Ben 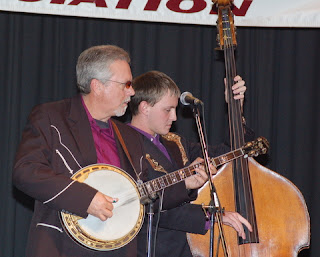 Green on banjo played as well as we’ve heard him over the past year or so. We bought his and ’s new solo projects, and a copy of ’s new project “A Stop in South Port Towne” as a gift. We left at the end of this set, having to return to to drop our friends and then back to the trailer in . All told, we thought our trip worth the effort and found it a delight to see and her band once again. As usually happens at this sort of event, a jam was going on in the lobby, oblivious to the professional bluegrass being played in the auditorium. This is one of the true glories of these local association events, because it helps assure the future of bluegrass music. 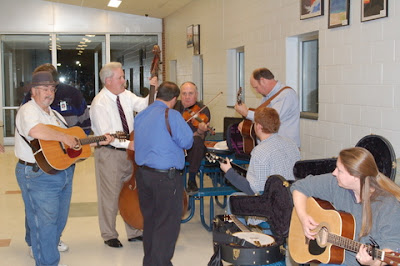