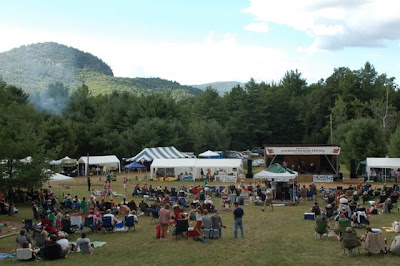 The Otis Mountain Music Festival may represent a model for successful contemporary music festivals. Promoter Jeff Allott put together an eclectic selection of varied groups with something to please everyone. From traditional bluegrass groups like regional favorite Big Spike and national touring band Blue Moon Rising to edgier bands like the Biscuit Burners, Cadillac Sky, and the Greencards, Otis Mtn. emerged as an example for promoters of small to mid-sized festivals of how to present a festival.
Diz (emcee) 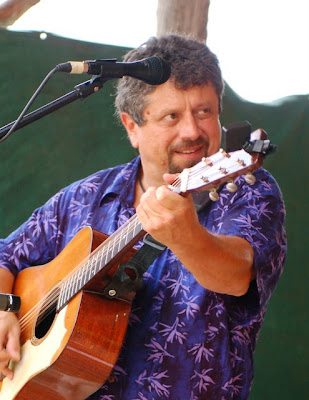 Otis Mountain is a small ski hill located about two miles outside Elizabethtown, NY along state route 9N. While E-Town is the county seat of Essex County, it offers few amenities for the traveler not prepared to be pretty self-sufficient. There are no chain motels or fast food restaurants, but the region provides several very nice bed and breakfasts and, if you include nearby Keene Valley, plenty of good places to eat and stay. In the short Adirondack summer season, the third weekend in August is perhaps the most packed with events, but Otis Mtn. drew well and, with the exception of a brief thunder shower on Saturday morning, was blessed with good weather. The setting itself offers a delightful natural amphitheater on the side of a gentle slope. The surrounding forest has lots of places of sunny or shaded camping. A traditional Adirondack lean-to and fire pit provide a delightful site for host band Big Spike to support nighttime jamming. With all camping “in the rough,” the site is still superb for a music festival. The decision of the Essex County Fair to move itself to the same weekend as Otis Mtn., may have affected attendance, but the two events appeal to quite different audiences.
Big Spike 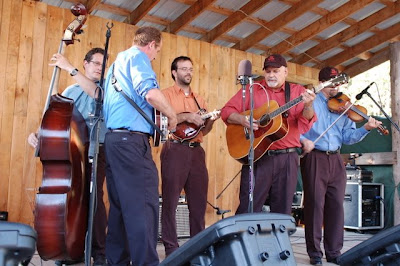 
Musically, Otis Mtn. had something for everyone. Host band Big Spike performed to their usual level of excellence. Despite the sad passing of mandolinist Neil Rossi’s mother, the band found a more than adequate substitute and laid down to very good sets on Saturday. Furthermore, their availability to host jams at the Rope Toe Stage provided an anchor for those camping at the site and wishing to jam at night. Newly formed Bluegrass Julie and Stacked Deck, a local band with roots in bluegrass and Saranac Lake were performing at their first festival. They led off on Friday afternoon, acquitted themselves well, and some members stayed to enjoy and learn. Two regional bands, both new on the scene, acquitted themselves well with sets on both Friday and Saturday. As readers of this blog know, I like to highlight a local surprise, and both these bands are worth catching and present good opportunities for promoters seeking promising bands.
Jim Gaudet & the RR Boys


Jim Gaudet and the RR Boys can best be characterized as a folk/country fusion group performing Gaudet’s well-crafted songs, filled with humor and insight. His instrumental mix might seem off putting to bluegrass or folk purists, featuring as it does both electric bass and guitar, but the music is entertaining and thought provoking. His song “Snowbound” and an audience participation piece called “So Far, So Good,” and "Split Pea Soup" all pleased. The band’s interactions are enjoyable. While well suited to lounge and street events, this band is eager to broaden its audience and contributes good value to the festival scene. Adrenaline Hayride is a high energy bluegrass band with a twist featuring very fine musicians whose sets are diverse and interesting. Band members all have broad experience in bluegrass and country music and three are virtuosos on their instrument who, during their musical journeys have won contests as well as toured with major bands. Their medley of songs from The Wizard of Oz is truly delightful, a real treat.
The Biscuit Burners
Billy Cardine 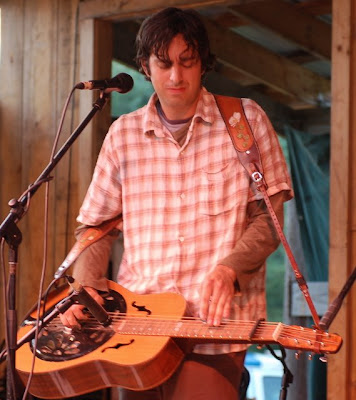 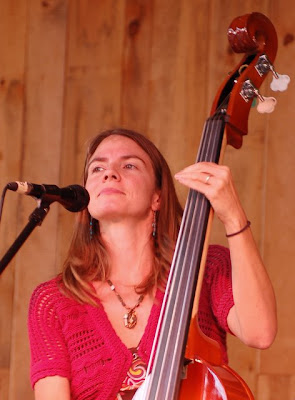 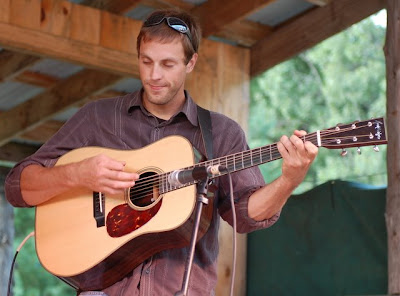 Odessa Jorgensen
photo removed at request of subject
The Biscuit Burners seemed somewhat out of place at Otis Mtn. on Friday evening with their somewhat edgy Appalachian Mountain sound blended with the unusual tones of Billy Cardine’s Chaturangui, a twenty-two stringed Indian variation on the slide guitar, creating an interesting, but often discordant mix. Their Saturday set offered a much more melodic and appealing mix, often to the delight of the audience. Odessa Jorgensen on fiddle and Mary Lucey on bass combine to sing an often keening Appalachian drone. Dan Bletz, a strong flat picker, adds rhythm and virtuosity. Cardine’s varied skills on Dobro, his Indian instrument, and open back banjo are selected to fit the individual piece.
Blue Moon Rising
Chris West 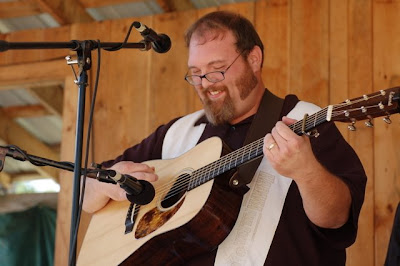 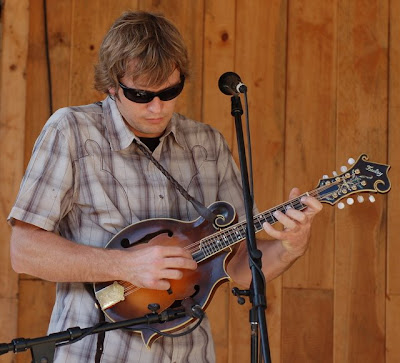 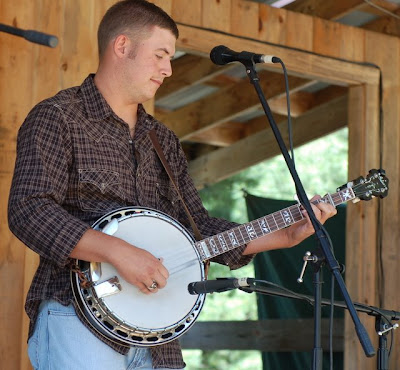 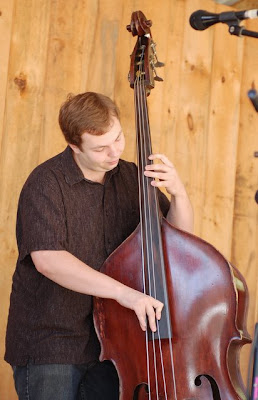 Blue Moon Rising provided a traditional bluegrass anchor for Saturday’s program. This engaging quartet from Tennessee features the songs of singer/songwriter Chris West and the strong baritone voice of Keith Garrett. Their song selection features pieces easily recognized and triggers an “I didn’t know this was their song” reaction, which should strengthen into instant appreciation and recognition as their reputation widens. Justin Jenkins on banjo adds good value, while Harold Nixon brings his experience with J.D. Crowe and fine bass beat and solos to the mix. Garrett on vocals and mandolin is strong and reliable and his songs like “Moonshine Hard Times” and “Jeffrey’s Hell” add to the mix. West’s “Hanging Tree,” “Another Lonesome Day,” and “I Grew Up Today” represent very good work. Their new CD, One Lonely Shadow, deserves attention and is getting good play on XM radio. Like many hard working and ambitious bands, Blue Moon Rising must endure long, punishing weekend trips to festivals not easily within reach and return to day jobs in their home territory during the week. The commitment and persistence of such bands is one of the true joys of our music and one of the features that make it unique and keep it close to the people.
The Greencards
Carol Young 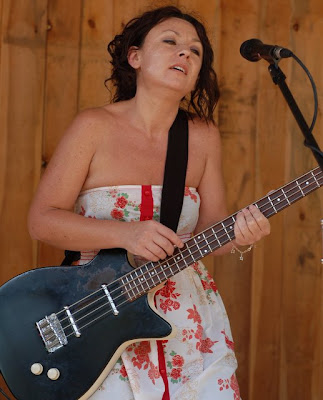 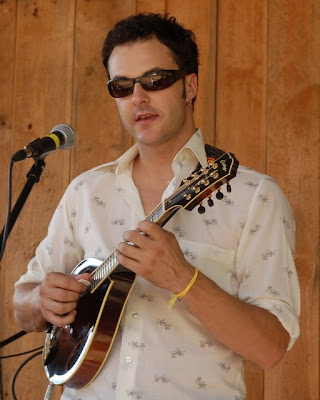 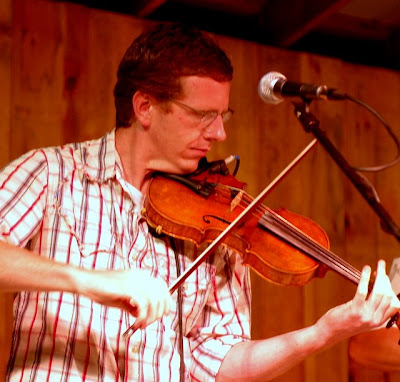 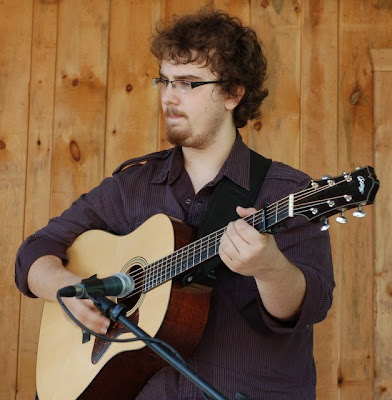 The Greencards had an excellent position in the lineup and delivered completely in both their sets. It’s difficult to characterize The Greencards as Americana, since only one member is an American. They’re not exactly a bluegrass band, although everything they play is informed by their roots in bluegrass. Neither are they folk or country, even though their CD Veridian was nominated for a Grammy award in the country division. The Greencards are simply a flat terrific plugged in acoustic band. Their music is informed by Celtic, bluegrass, blues, and pop influences. Lead singer Carol Young on bass reaches deep inside for her soulful renditions. She’s lowdown and lonesome at once. Fellow Australian Kym Warner on mandolin, bouzouki, ukulele (?) and vocals is intense and talented. He moves to his own beat and moves the band, too. Eamon McLoughlin, a talented fiddle and viola player, comes from England. His backup and solos often reflect his strong Celtic background. Jake Stargell, the lone American in the band, has been traveling with the band for some months now. His guitar solo at the end of their second set raised the intensity of the band and brought sustained cheers from the crowd. At age seventeen, his career will be more than interesting to watch. Often what happens backstage, hidden from the crowd, generates some of the most exciting music at a festival. A jam including members of all four featured bands in late afternoon was a wonder of music and fellowship. The Greencards head into the studio at the end of August and should have a new CD out in the spring.
Cadillac Sky 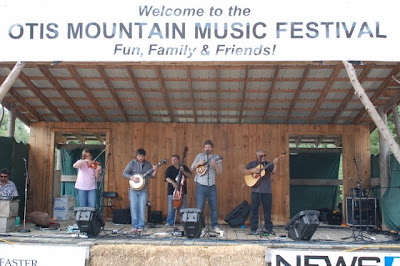 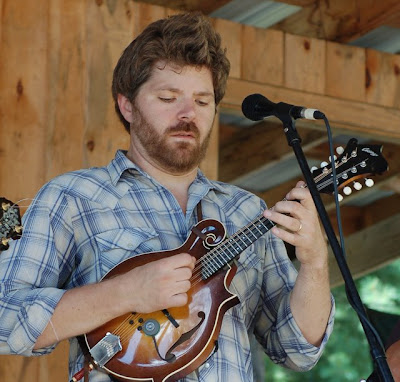 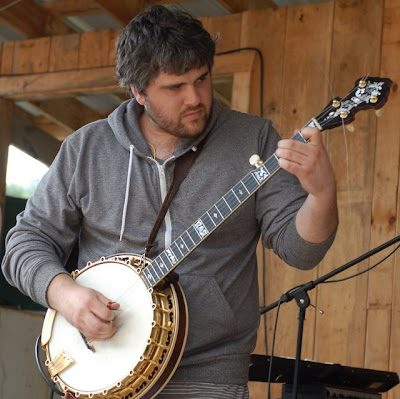 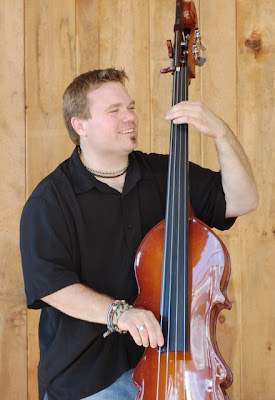 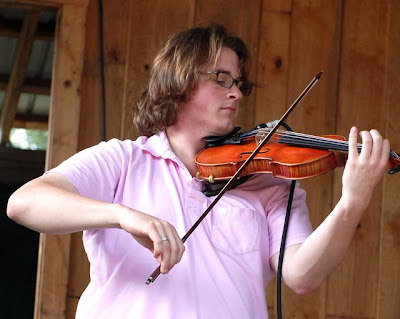 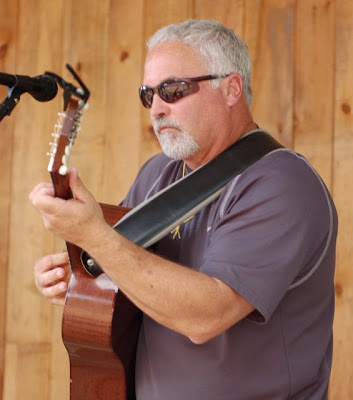 Cadillac Sky has been growing and developing over the past several years as its reputation and performance rise increasingly high. Their performance at Otis Mtn. represented new levels of musicianship and maturity. Often criticized for being too loud and somewhat brash, their work at Otis was crisp and clean. Every word of Bryan Simpson’s singing was understandable, while they didn’t give up a bit of their dynamism and electric energy. From directly in front of the stage to high on the hill, their sound was muted enough so each instrument in the ensemble could be heard clearly, yet strong enough to generate and maintain the excitement this band thrives on. Given the often unenviable closing position as the hill became chilly and damp under the full moon, Cadillac Sky held a significant audience and generated plenty of excitement. This band lives in Texas and their music shows strong Texas roots while never straying too far from bluegrass. Matt Menafee is emerging as one of the fine young banjo players, joining the group of innovative pickers including Chris Pandolfi, Noam Pikelny, and others. Ross Holmes is dynamic on fiddle and provides strong vocal harmonies. Andy Moritz on bass is a creative and innovative bass player. When he plays his doghouse bass, it is not only a musical event, but an athletic one also. Mike Jump’s high tenor harmonies and solos as well as his good flat picking and always reliable rhythm guitar are strong and reliable. Fronting the band is Bryan Simpson whose songwriting, singing, and mandolin picking set the tone and maintain the drive of this excellent band, nominated for IBMA emerging artist of the year. 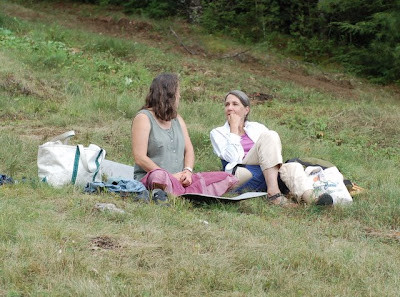 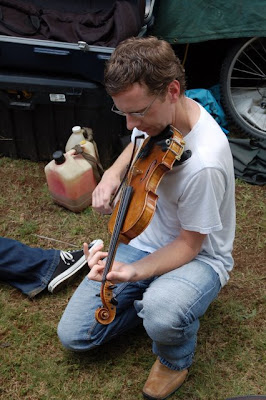 Otis Mtn’s program announced rules about alcohol possession and glass bottles, which were completely ignored during the course of the festival. When a festival announces rules and then enforces them, even to the point of removal, audiences come to know what’s expected and learn to live up to the standard. The foregoing notwithstanding, this festival has so much to recommend it that my comment may seem a bit churlish. The vendors provided an excellent range of food choices with bakery goods, natural foods, and the always delicious firehouse chicken barbecue provided by the Elizabethtown Volunteer Fire Department. The sound was at least adequate, although somewhat slow on the variations of set up needed by quite diverse bands. The largely local audience came with few expectations of what to expect. They heard and appreciated a stunning variety of excellent music and accepted each performer for what he was without excessive criticism. They stand as a pleasant contrast to some pure bluegrass audiences. Otis Mtn’s model of a diverse program keyed to offer something for nearly everyone except the purist may point the way to the future of music festivals as they seek to attract a new audience while preserving the great legacy given to us by the pioneers of bluegrass.
Billy's Chaturangui 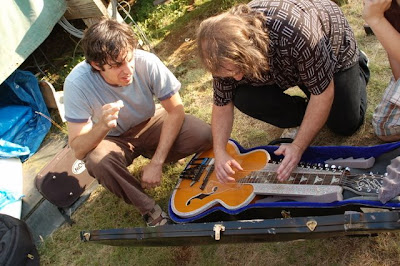 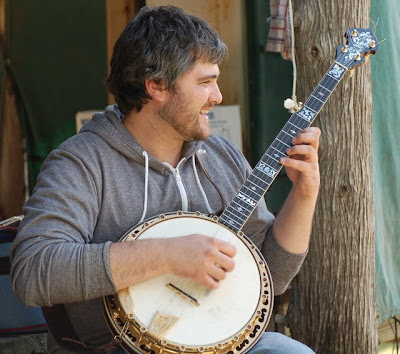 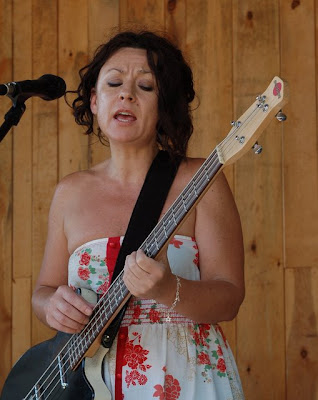