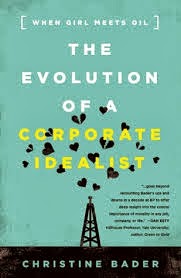 Evolution of a Corporate Idealist: When Girl Meets Oil by Christine Bader (Bibliomotion, 2014, 266 pages, Kindle price $10.99) is an important book for several populations to read. It is aimed quite accurately at those people who wish to work inside corporations to make them more ethically, morally, and socially responsive to organizations, those who would view multi-national corporations as rapacious, greedy organizations paying no heed to the social, economic, environmental, or safety needs of workers, and the media which publicize conditions and disasters with little attention to context or the challenges presented. Bader succeeds in meeting these goals by exploring her own doubts and fears, accomplishments and failures as she works in corporate, United Nations, and non-governmental organizations to make a difference in the areas of corporate responsibility and means of communication.

After earning her undergraduate degree at Amherst College, where she was on the squash team, and an MBA at Yale, Bader joined BP, helping direct projects involving human rights and community safety. Her earliest assignment was to the Tangguh region in Papua, New Guinea (Indonesia) where BP was seeking to develop a huge Liquified Natural Gas project in a remote, undeveloped area of the country. Based on the company's and her knowledge of previous difficulties encountered by both BP and other extractive corporations, particularly Exxon/Mobil's disastrous and expensive incident's in Aceh Province, BP, under the leadership of Chairman John Browne became committed to finding a different road, which would avoid the environmental damage and social unrest often created by such large projects. Achieving these goals involved developing new, sensitive approaches to communicating with indigenous populations as well as unstable governments and corrupt officials to gain their willing cooperation. Such negotiations require that all stakeholders be thoroughly involved in the process of development, coming willingly on board. In what is often called “the paradox of plenty,” newly found riches often lead to the destruction of the moral and cultural life of local people and governments leading to resistance and huge cost in security and lives.

Along the road to seeking solutions to such problems, Bader learns negotiating and interpersonal skills as well as cultural sensitivity that helps BP avoid the disruption often caused by development and mulit-nationals' not heeding the local power structure or communities while dealing mostly with the government at the top. Bader suggests that for both business and moral reasons, corporate willingness to take stands by making the correct moral choices is almost always the right thing to do. It is essential, she says, for corporations to avoid complicity in human rights abuses. The risks, ranging from causing disruptions in family life to excusing accidental death as a cost of doing business can only increase resistance to a company's presence. Often, human rights specialists wish to publish transparent reports about local and world issues while company lawyers hold back, fearing publicity and liability, always taking “worst case scenarios.” Bader tags Reebock, Nike, BP, and Apple as leaders in helping set global supply chain standards despite the adverse publicity they have received.

Bader's narrative turns from Indonesia to the co-development of a massive chemical plant near Shanghai, China, where local officials had estimated the project would cost at least eight lives lost. BP initiated a “no death” policy, encouraging the stakeholders (BP, the Chinese government, a large Chinese construction firm, and the local communities) to develop safety and community standards. She notes that speaking up to government in cases of corruption, political murder, or invasion of privacy must be done quietly and, due to local laws, cannot be announced. The entire process of operating within corporations as a Corporate Idealist is one of slow progress, quiet negotiation, and learning to be satisfied with small victories. Working with the Chinese, Bader finds cultural and linguistic barriers to be nearly insurmountable until she learns to find common ground, not on the moral issue of human rights, but in terms of status and respect. In a country where human lives are held as less valuable, she needs to find ways to make sure that local facilities become a matter of local and national pride to the country.

After her years at BP, Bader goes to work on a commission to develop a set of universal principles of human rights and Corporate Social Responsibility at the United Nations under the leadership of John Ruggie, a professor at Harvard. Throughout this period of difficult work and thoughtful development, continuing for several years, Bader continues to contribute and learn. Her book argues that the “business case,” is insufficient to achieve corporate responsibility without a commensurate recognition that concern for the environment as well as people's health and welfare is morally right. Neither the extractive industries nor the manufacturing ones have been able, on their own, to accept the human rights of their employees (and the employees' communities) as a business proposition or a moral one. No governmental body nor the United Nations can force such principles on these entities, but careful, persistent work by Corporate Idealists seems to be having some positive effect. 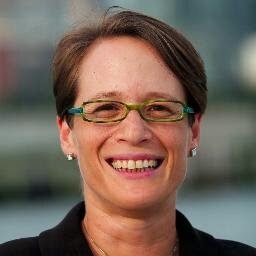 Christine Bader has spent fifteen years in corporate and non-governmental roles. She is a Visiting Scholar and Lecturer at Columbia University, where she co-teaches a course on Human Rights and Business, and a Human Rights Advisor to BSR. Christine Bader played squash and rugby at Amherst College and competed in the 2002 World Ultimate Frisbee Club Championships, but now finds her athletic glory jogging along Manhattan’s Hudson River.  She lives in her native New York City with her husband, son, and daughter.

In Evolution of a Corporate Idealist: When Girl Meets Oil  by Christine Bader (Bibliomotion, 2014, 266 pages, Kindle price $10.99) she effectively makes her points by avoiding hectoring or moralizing. Clearly, she recognizes the moral and social benefits of corporate responsibility, but she refuses to lecture. She recognizes that building relationships and developing ownership by all the stakeholders involved is the only way that the goals of the Corporate Idealist can be achieved. John Ruggie remarked, “No matter how good your ideas may be, the manner in which they are produced matters greatly.” Bader consistently drives this point home by featuring the experiences of a number of women and men employed in CSR (Corporate Social Responsibility) who describe their work, it's difficulties, and rewards in enthusiastic, but frustrated, language. By relating the business experiences to her personal life, she keeps the narrative real and alive. The challenges of substandard buildings, dangerous working conditions, worker suicide, familial disruption, and all the social ills of development continue, requiring companies and countries to maintain consistent attention in a difficult to sell competitive environment. Corporate Idealists must work effectively and consistently to get all stakeholders to buy in. This book was supplied to me by the publisher as an electronic galley through Edelweiss. I read it on my Kindle.