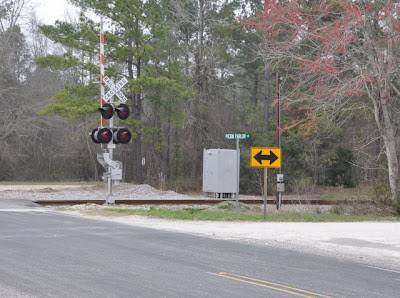 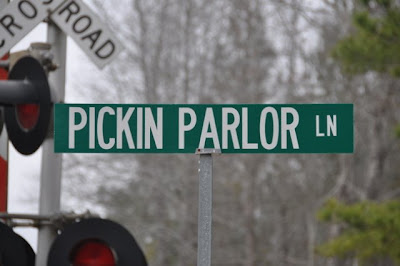 The narrow, straight road cuts through the Francis Marion National Forest. There are few houses along the road and even fewer businesses. We’re deep in the midst of some of the most rural real estate in the Low Country of coast South Carolina. With our friend luthier Jennings Chestnut driving and the shop in Conway closed so his wife Willi can come along, we’re driving to Guy & Tina Faulk’s Pickin’ Parlor in Bethera. Soon we come to a dirt drive with a road sign saying Pickin’ Parlor Lane just before a railroad grade crossing. We turn down the dusty road to the end where there’s a small, tumbledown building, a covered shed over several picnic tables, and an iron boiler being stoked with wood to provide heat.
Jennings Chestnut and Guy Faulk 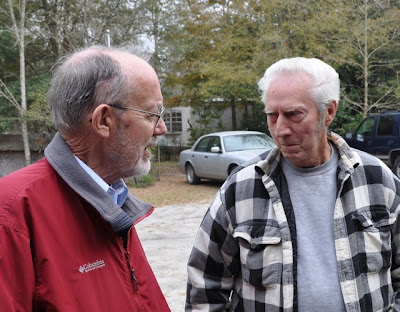 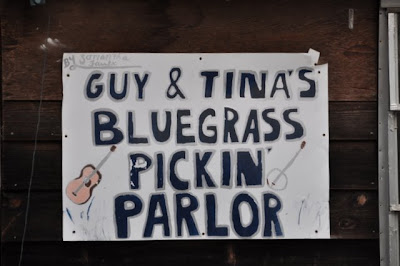 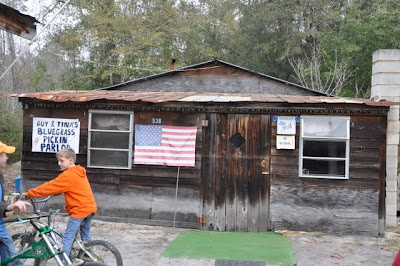 Guy and Tina Faulk have been hosting a weekly Saturday night jam at their home in Bethera for nearly 32 years. During that time, some bluegrass greats have played on the small stage and jammed with the regulars, but the core of this get together is the core of bluegrass everywhere: a group of friends and acquaintances get together to play and sing together, eat some food provided by ladies who bring it every week, and listen together to two or three bands perform There weren’t any big name pickers present the night we went, but there were plenty of familiar faces for those of us who’ve been around bluegrass in the region between Charleston and Myrtle Beach. The audience was clearly familiar with the performers and the line between the two was slim. In 2006, the South Carolina State Legislature, through the state Council on the Arts awarded Guy and Tina the Jean Laney Harris Folk Heritage Advocacy Award for their work in support of bluegrass music in the region in a reception at the University of South Carolina’s McKissick Museum. 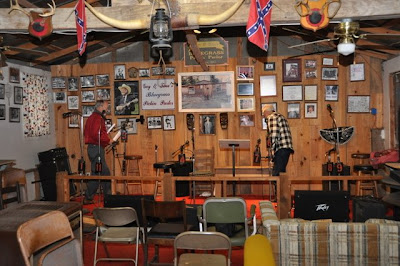 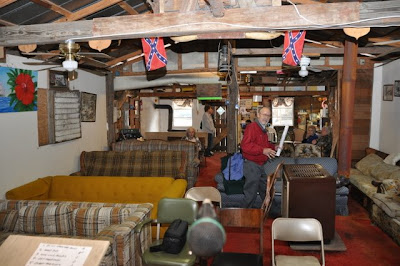 We arrived early because Jennings wanted to make sure I had a chance to chat with Guy Faulk and see the facility. Guy is a friendly, but shy, man who speaks about the importance of keeping bluegrass music alive at the personal level and providing a place for pickers to gather and make music together. He proudly showed me pictures of people who had sung at the Parlor mixed with publicity photos of the greats of bluegrass history. A large photograph of Bill Monroe dominates the rear of the stage. The room is filled with large comfortable settees and heated by two wood stoves that pump out plenty of warmth. The sound system is hardly state of the art, but provides a good mellow sound and plenty of power for this small room. Several times during the evening Guy stopped to point out a picker or give me additional information about his and Tina’s creation. Tina, unfortunately, is in ill health and was unable to make an appearance. Nevertheless, Guy and Tina Faulk have been one of the engines keeping bluegrass music vital in the Low Country of South Carolina. 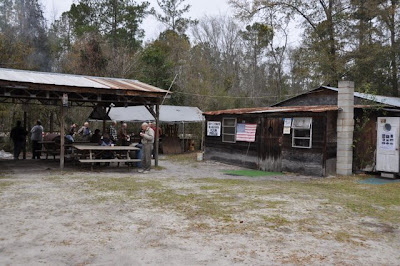 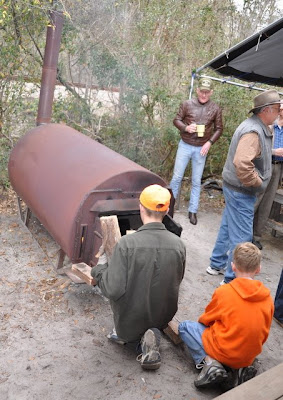 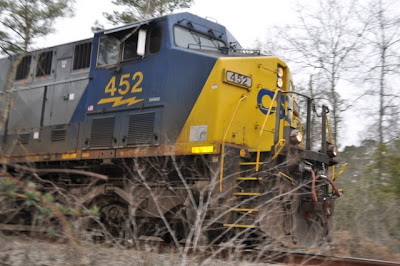 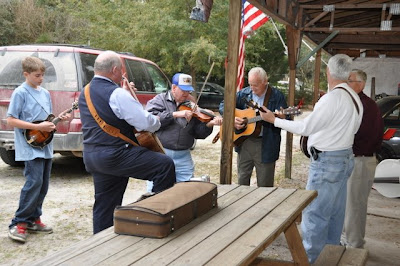 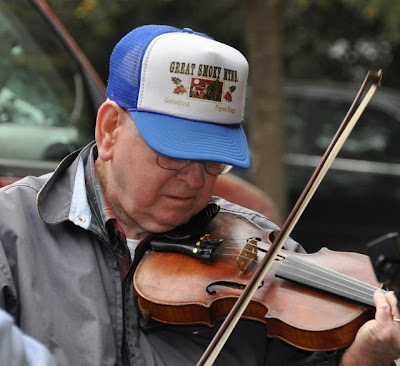 The Faces of Bluegrass 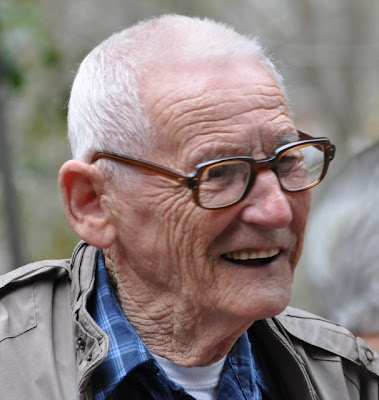 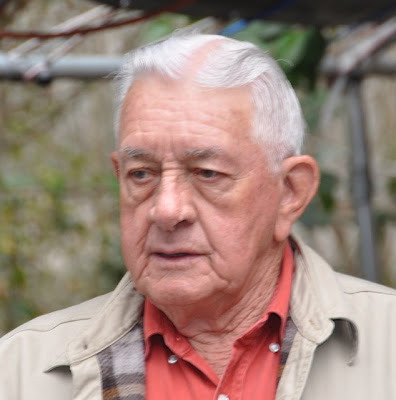 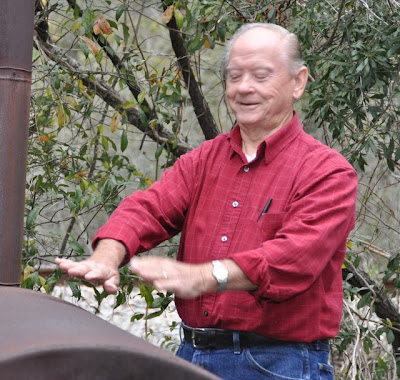 As afternoon turned into evening, more pickers showed up and soon there were several small groups picking on the grounds. At around seven, people began to drift inside and one of the picking groups formed itself into a band and took the stage. They sang and played a variety of bluegrass standards at moderate pace with humor and enthusiasm. There was lots of banter among members of the band and between them and the audience, which was clearly familiar with and friendly towards them. At the end of their set, they were awarded an encore, which yielded one of the evening’s highlights as 85 year old fiddler G.T. Lane kicked of the fiddler’s national anthem Orange Blossom Special with enthusiasm and skill. The band joined in, the crowd clapped and cheered, and the set ended as a great success. 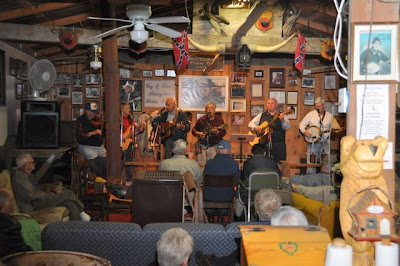 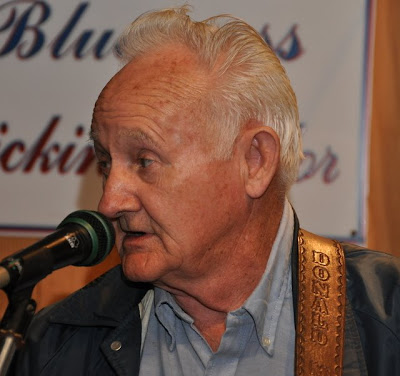 The featured band for the evening was Eagle Creek Bluegrass. This band, composed of three women, probably wouldn’t have existed in the boy’s club that was bluegrass until quite recently. Fortunately for all of us, this is no longer true, and bands like Eagle Creek are the result. Composed of three women singing in close harmony and playing with skill and color, Eagle Creek specializes in gospel bluegrass, but also sings traditional bluegrass standards and country music. Their bluegrassification of the Everly Brothers great song “Dream, Dream, Dream” was particularly effective. Lead singer and guitar player Eve Hinman has a very pleasant voice in addition to having contributed several of her own gospel songs to the group. Dottie Hurt, a smiling bundle of personality, sings lead and harmony, and plays bass. Her “Muleskinner Blues” was as good as anyone’s. Linda Cockerill was steady on banjo and sings fine baritone harmonies. This is a very enjoyable group to hear and watch.
Eagle Creek Bluegrass 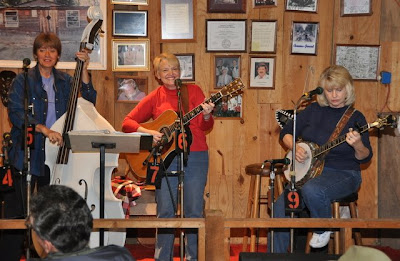 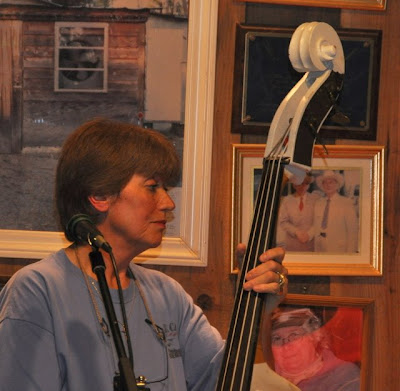 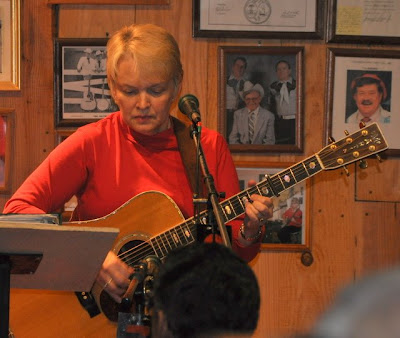 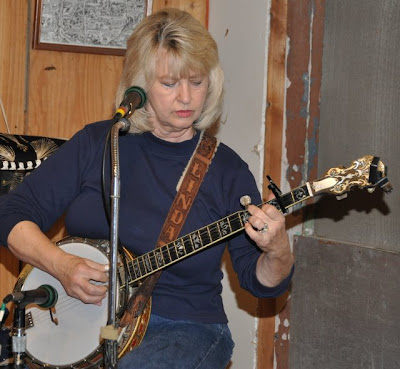 A third band, featuring many of the pickers we had seen picking outside earlier, took the stage as we were leaving for the rather long drive home. They, too, performed with skill and enthusiasm. Local bluegrass venues like Guy and Tina’s serve a vital function in the chain of bluegrass performance. While many fans focus on large festivals and headliner bands, weekly get togethers in rural and urban settings, as much social events as musical ones, give people who love to make and hear bluegrass music a place to get together. 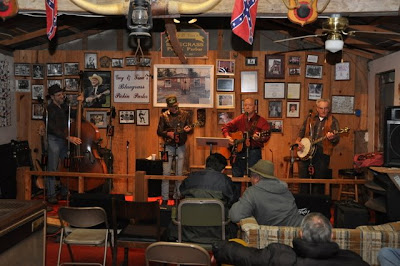 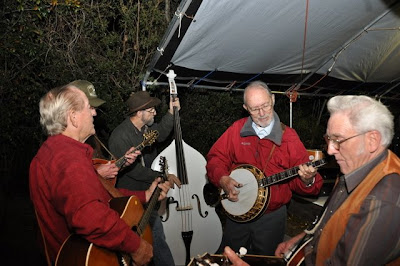 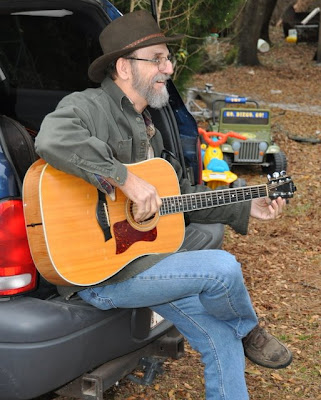 It is in these locations where, especially today when too few families gather around on the porch or in the kitchen to make music, young people are first exposed to acoustic music. While many of the participants at Guy and Tina’s are, at best, seasoned, a sprinkling of young people was there and were playing instruments. These young people, as well as those being introduced to the music through other youth programs, represent the future. Guy and Tina’s Pickin’ Parlor is not only a pleasure, it serves as an opportunity for memory to meet the future and continue to preserve and develop a great form of music.

The Future of Bluegrass 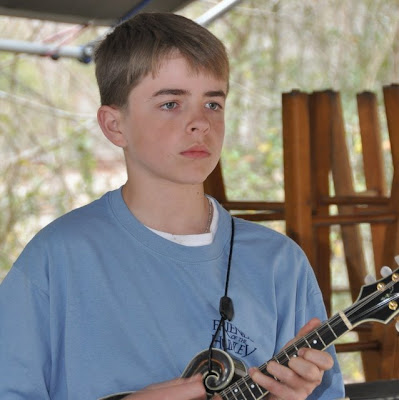