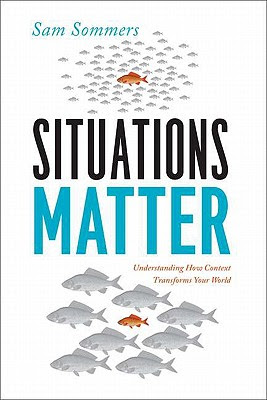 As Sam Sommers, author of Situations Matter, would have predicted, I completed my reading of his book liking it a whole lot more than I did while reading the first few chapters.  Why was this and why does it matter?   Well, first, this is the question his book asks readers to ask themselves. Second, because as I read I became better acquainted with him and came to understand his point of view more thoroughly. And third, because I'm really (no...no...no - REALLY!...methinks I doth protest too much) the sort of open-minded, self-questioning, theory oriented, reality-based, flexibly-developed, basically nice person he wants me to be. While at the same time I review books, seeking to discover those elements that appeal to certain kinds of readers and to examine what about a particular book attracted, distracted, engaged, amused, or enlightened me.

Sommers' major thesis is that the context we're in, how we view our situation, frames our response to it at levels often below our levels of immediate consciousness.  By understanding the power of context to shape our viewpoint, he asserts, we are more likely to be able to take the next step - altering our behavior in a more fruitful or positive direction. Sommers, a professor of psychology at Tufts University in Boston specializing in social psychology, uses numerous research studies presented in an engaging and simplified fashion to illustrate his points. His discussions of these studies are remarkably free of jargon, cant, math, and charts, making the book interesting and, perhaps, useful for the general reader.  He adopts a breezy, friendly, even jocular tone which won't win him points towards tenure at Tufts, but will tend to keep certain readers entertained and engaged in his book.  He also uses himself and his own experience, as a teacher, father, husband, and individual engaged in living life while later considering his own reactions, often not to his benefit, to examine the major points he makes.  The use of his own insights brings a desirable personal quality to his writing while effectively lowering the authorial wall said to exist between writer and reader. 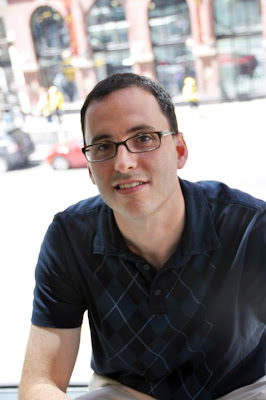 Sommers begins by arguing the WYSIWYG (What You See Is What You Get) does not generally apply to human interactions. He uses many examples to make this assertion clear, many of these selected from news stories with which the well-informed general reader is likely to already be familiar. For instance, he used the beating/rape of a woman in Kew Gardens, NY, heard and perhaps seen by dozens of people, as an example of the reluctance of even good-hearted people to intervene in matters they think isn't any of their business.  Another example is a widely cited research study in which subjects were willing to continue to turn up the dial on device they thought was administering shocks to other subjects behind a wall, despite their cries of pain, screams for mercy, and eventual silence.  Such examples may lose their power because of their familiarity to so many readers.

This observation leads me to ask who the desired audience for this book might be.  It probably isn't a seventy year old retired English teacher whose major field studies in graduate school 40 years ago covered much the same territory. I frequently experienced the feeling that the editorial process had been a series of committee meetings designed to add jokes, cracks, and lightness of language designed to appeal to students and general readers in the fifteen to thirty age group. Situations Matter would be an extremely useful book for a high school social sciences teacher to use as an easy and accessible text for students planning on attending college. It would also be strong candidate for inclusion in a freshman social sciences survey course and would easily lend itself to replication of the studies presented and discussion of their effects on participants in such settings. It could also be a useful book for book clubs filled with people who think they deal in facts and deny they're influenced by others around them, conformity in social situations, and factors related to race, gender, and class.  Chapters in the book are likely to lead to lively and, perhaps, productive discussions in classrooms, book clubs, and around the lunch table at work. Actually, without such discussions, the book's effectiveness will be lessened. Individual readers must ask themselves, or place themselves in situations where they'll be asked, the questions raised by the studies and examples Sommers uses. Only through such discussions, and even practice exercises, can the lessons to be learned from Situations Matter turn into behavioral change. Perhaps an addendum to each chapter containing such questions and exercises might prove useful in the second edition or an on-line support effort.

Sommers is particularly effective when discussing interpersonal relationships and the factors effecting them. He suggests, for instance, that people wishing to become more socially involved locate themselves near stair wells or elevator towers, places where traffic is heavier.  They should hang out in the cafeteria or go do their homework at Starbucks, thus enabling social interaction.  He argues that the more familiar we become with someone else, the more attracted we become to them.  The more we seek to see situations from someone else's viewpoint, the more understanding we can be. In his chapter "Love" he argues that there is no single "right" person for any of us. The universe of who we may come to love and happily spend our lives with is literally huge. We are a flexible species who can come to terms with the situations in which we find ourselves and make the best of them.  His chapter "Hate" is actually a chapter on race, and thus not a well-chosen chapter title. Nevertheless, he builds a powerful argument for factors such as race, ethnicity, and physical disability being the seldom surfaced factors affecting many of all of our reactions through life and that opening them to discussion lessens their power to lead us to discriminate on such factors.  Quite good and useful stuff, and, mercifully, more direct and less crack laden. This is serious material deserving serious treatment, which it receives.

Situations Matter is published by Riverhead Books, a division of the Penguin Group, and was provided to me the publisher through TLC Book Tours. If you think you'd like to read this book, please order it through the Amazon portal on this blog.