Bill Monroe: The Life and Music of the Blue Grass Man by Tom Ewing - Book Review 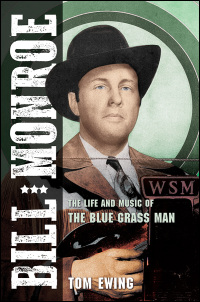 Tom Ewing’s Bill Monroe:The Life and Music of The Blue Grass Man (University Illinois Press, 2018, 656 pages, $34.95, 19.95) is a huge piece of Monroe scholarship bringing together a range of sources testifying to the hard work and thoroughness of the author. At this point, and until further work is done, it must stand as the definitive biography of the Father of Bluegrass, whose long, complicated life, background, musical genius, along some of his flaws, are carefully, thoughtfully, and exhaustively documented.

Perhaps the strongest portions of the book are the painstakingly assembled history of Monroe’s genealogy, the account of his difficult childhood during which his development was affected by his poor eyesight, and the transformative power of music in his life. Along with this, Ewing establishes a picture of the hardship and hard physical labor which helped to establish Monroe’s legendary stamina and work ethic. The author is always careful to place the arc of Monroe’s life within the context of important national news events of the times as well as milestones in music’s development and change through the decades. This practice helps provide context and texture to the story as well as, sometimes, explaining choices that Monroe made or was forced to accept.

Organized into ten chapters with each but the first covering a decade of Monroe’s life, Ewing has gone to great lengths to detail appearances, recording sessions, members of the band and the hazards of travel. For many readers these almost day-by-day accounts of where Monroe was, the difficulty of getting there, the fluidity of members moving through the band, and other massing of detail will provide the literary fodder they crave. Many important mileposts are signaled by boldface headings within chapters, but turn out to take a paragraph or less to cover before Ewing moves on to greater masses of detail. Some readers might prefer further analysis of how events may have influenced decisions and actions Monroe took.

The book contains extensive evidence of Bill Monroe’s efforts to both protect “his” music and to encourage musicians influenced by his music to find their own mode of expression. For instance, in 1941 the first case is described of a mandolin player being told to not play like Monroe, but rather develop his own style. Stories from every era afterwards repeat this story in one way or another as Monroe taught, changed, and protected his music. Many fine and, later, well-known musicians, got their start with him, while others were initially drawn to his style of music from seeing him or hearing him on the radio and in recordings. He came, however, to view many of these emerging bands, which would become iconic in their own right, as competitors of “his” music.

Monroe was always careful to seek to protect his own music while, simultaneously being aware of changes in popular music. The longevity of his career speaks to both his stubborn insistence on his own vision along with a willingness to bend to changes in popular music when times demanded it, at least until he began to institutionalize his own music as he grew old and became recognized as the Father of Bluegrass Music. At one recording session in 1958, Red Cravens remarked to Bill that he ought to play more old songs. He reported Bill as saying, “That’s in the past...You got to keep looking forward….Don’t look back.” (200) Monroe appears always to have been watching what was happening in music, adapting to current styles and trends, and reflecting them in his music. His adopting Elvis Presley’s interpretation of his Blue Moon of Kentucky is perhaps the best example of this.

Monroe’s complex and varied relationships with women are dealt with extensively, but not with any particular depth of understanding or analysis, which they deserve. Similarly his feuds with Flatt & Scruggs as well as others he seems to have thought were riding on his reputation deserve further analysis. Monroe’s successful efforts to keep Jimmy Martin from being made a member of the Grand Old Opry, perhaps because of his pursuit of Bill’s daughter Melissa, deserve further explication. Similarly, Bill’s relationship with his son James is complex and costly to him.

One of the great virtues of Ewing’s book is the connection he continually makes between Monroe and other seminal figures in the history of bluegrass who all seem to come into contact with Monroe at some point, influencing him and being influenced by him. This includes not only musicians, but entrepreneurs (Ralph Rinzler & Carlton Haney), scholars (Neil Rosenberg and Fred Bartenstein), venues (New River Ranch, Sunset Park, Brown County Jamboree, The Grand Old Opry), and so-on. By pulling this all together, Ewing firmly cements Monroe’s place in music history in huge, sometimes tiresome, but always useful, detail. Perhaps the sheer length of Monroe’s life and his vast importance keep a single volume account from ever being entirely satisfactory or a single review from covering it adequately. My own notes contain over 6,000 words. 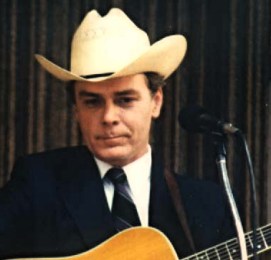 Tom Ewing served as the last lead singer and guitarist in the Blue Grass Boys during the period 1986 – 1996, also appearing on three albums. He attended Ohio State University, earning degrees in journalism and education. He has written extensively about Bill Monroe as well as writing a column for Bluegrass Unlimited magazine. He has been a founder or a member of several bands devoted to either playing Monroe’s music or emulating his style.

Tom Ewing has written a comprehensive and detailed, almost encyclopedic, account of Bill Monroe’s life and times, including extensive notes and index. It offers insights into Monroe’s behavior while generally leaving it to the reader to draw conclusions about their meaning. This quality is both an asset and a liability to this book, but perhaps Ewing’s decisions are sound, while much more remains to be written to fully encompass this brilliant, crusty, strong, and needy man whose musical influence continues to be felt, even after nearly one hundred years of its first emergence. The University of Illinois Press provided me a hard back copy of Tom Ewing’s Bill Monroe:The Life and Music of The Blue Grass Man (University Illinois Press, 2018, 656 pages, $34.95, 19.95).

Posted by Ted Lehmann at 9:14 AM No comments: