What could be exciting about a little girl in an orphanage learning to be a chess player and following her progress as she becomes a prodigy on her way to world class competition? I’m not interested in chess. We don’t often watch “women’s” dramas. Who cares about lost orphans? Well, I dare you not to binge this magnificent drama which becomes a metaphor for the game of life - its joys, dangers, pitfalls, and searches for meaning. The Queen’s Gambit, currently streaming on Netflix, will provide you with a hugely satisfying coming of age story about a remarkable young woman as well as a new appreciation of the dramatic possibilities found in a game in which two people sit opposite each other for hours with all the drama taking place in their heads. 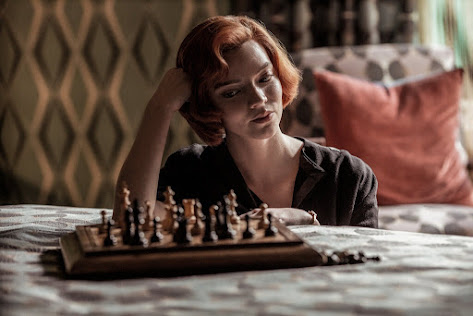 The story begins as nine year old Beth Harmon, played as a child by Isla Johnson and later by the remarkable Anya Taylor-Joy, arrives at a cold, rule-encrusted, emotionally stark orphanage in rural Kentucky. An impressionable and repressed little girl with little understanding of the world she is entering, Beth seems shut off and lost. She soon finds her way to the school’s basement, where the school janitor, Mr. Shaibel, played by Bill Camp, silently plays through chess problems between times spent sweeping floors and changing light bulbs. Beth asks about the game, which he quietly and patiently introduces to her, while discovering that she has remarkable aptitude for the game. She has also discovered a refuge for emotional and intellectual support that will become a foundation for her story.

Eventually, Beth is adopted by a cold, distant couple, and raised by her doting, but alcoholic mother, who gladly live off her daughter’s increasingly successful chess career leading to fame, money, and increasing international prominence. As Beth’s story continues, chess is always prominent, somehow becoming both a frame and the story’s centerpiece, while never becoming exceedingly formulaic or cliched. On the contrary her triumphs at the chessboard set the frame for her struggles with drugs, alcoholism, and relationships.

So, let’s take a look at chess as the centerpiece of this fine film drama, according to Dylan Loeb McClain, former chess columnist in the New York Times. He says that the setting is eerily reminiscent of chess tournaments around the time in which the film takes place, one of the many reasons that the series is one of the best and most successful screen adaptations of the game.” I can add that for a person who was in high school and college during the period the series portrays, there’s a clear familiarity. The actors were trained to avoid chess mistakes to the point of learning to move chess pieces the way real players do. Even the games are real recreations of actual competition. McClain points out parallels with the great American chess champion Bobby Fisher, while suggesting that making the protagonist of this series a woman is not only dramatically satisfying, but represents a rebuke of Fisher’s often sexist remarks about women in chess. While voicing some criticisms of the series, former world chess champion Gary Kasparov says, “But trust me,” he said. “This is as close as one can have it.” 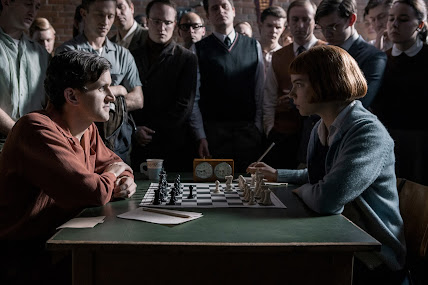 Actress Anya Taylor-Joy commented that learning to communicate the passion engendered by chess as well as to control the movements on and around a chess board were relatively easy for her to master as she compared them to her own passion for dance, also seen in Beth’s self-discovery through dance music in the show. Beth’s increasingly rich relationships with chess players who undertake to teach her while eventually falling to her in chess competitions and for her as an increasingly alluring woman become a centerpiece of this drama.  Taylor-Joy truly inhabits the role.

The Queen’s Gambit, the name of a chess opening as well as of this delightful film series, takes its time, which is one of its glories. The camera lingers, moods evolve, problems present themselves and then are slowly and thoughtfully resolved. Meanwhile, the sense of movement and action keeps attention high. This series is never hampered by the chess setting, whether you know the game or not. While I fall in the “not” category, just barely knowing how each piece is supposed to move with no sense of the complexities of the game, the growing excitement and tensions within Queen’s Gambit kept me involved throughout. I highly recommend it to adherents of first rate, cerebral drama.