The forty-third annual Strawberry Park Bluegrass Festival will run from May 30 - June 2, 2019 at Strawberry Park Camping Resort in Preston, CT. One of New England's oldest continuing bluegrass festivals, Strawberry Park went through some adjustments during a change in management, but has now re-emerged as a top-notch event, ranking with the best the northeast has to offer. Located within a hundred or so miles of huge population centers where bluegrass has been a popular form of entertainment since the late forties, the festival appeals to fans of both traditional and more progressive forms of bluegrass, offering something for all. Strawberry Park specializes in offering well-known and ground-breaking national bands, while highlighting the best in local entertainment, too.  Here's this year's lineup along with video examples of their work: 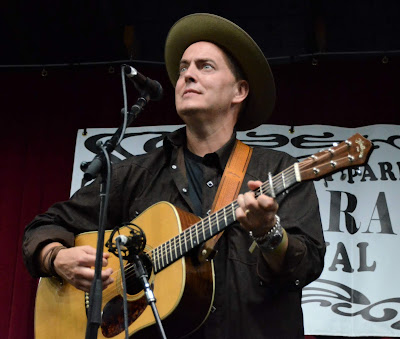 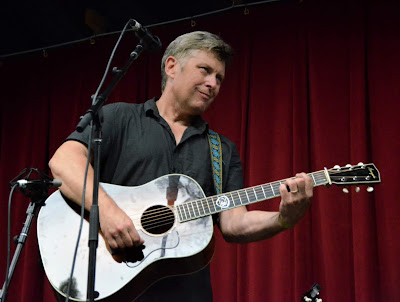 The Gibson Brothers have been a fixture in the region's bluegrass scene since the nineteen nineties. They've been named as IBMA's Emerging Artist of the Year as well as twice Entertainer of the Year. Noted for their brother harmonies and song-writing, they have, this year, also recorded a new country album called Mockingbird. With help and encouragement of Dan Auerbach of the Black Keys, the new recording expresses a deep inner part of the brothers background and forward looking attitude. It has been greeted with excitement by Rolling Stone and other major outlets. The Gibsons will be presenting two shows at Strawberry Park, the afternoon one a full electric band playing the Mockingbird material, and a ninety minute evening closer of their bluegrass favorites. What a treat! 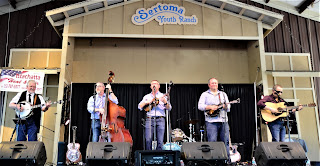 Balsam Range emerged from rural Haywood County in North Carolina with deep experience in bluegrass, gospel, country, and rock music, presenting a new creative sound for bluegrass. Couched in tradition, they explored and continue to delve into some of the places where bluegrass seldom goes. The response to their work from traditional audiences as well as more diverse ones has been electric and exciting as they've been awarded two Entertainer of the Year IBMA awards and fiddle player Buddy Melton has won two Male Vocalist of the Year awards. This is their first appearance at Strawberry Park, and you're in for a treat.

The Girl Who Invented the Wheel 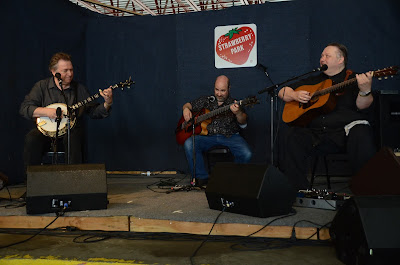 Magic happens when the Kruger Brothers take the stage, whatever the venue. Whether it's a bluegrass festival or concert halls where they often play with an accompanying symphony orchestra, they always receive wild applause, often, certainly for me, bringing their audience to tears of joy or heights of passion. People who don't attend bluegrass festivals often come to them when the Krugers are there, while festival goers can be found in concert halls to see and hear them. I wrote a column in No Depression including more information about the Krugers that you might find interesting. 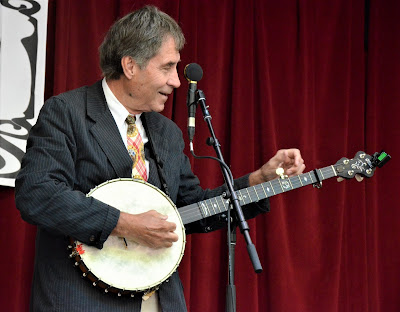 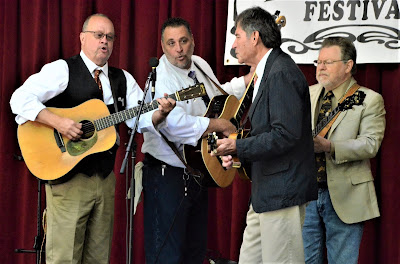 Dry Branch Fire Squad has performed at nearly every edition of Strawberry Park since the beginning, offering a regular set on Saturday and their gospel set on Sunday. They offer a mixture of traditional old-time gospel music and Ron Thomason's unique, incisive view of the state of the world, which might pass for a "Sunday sermon." A fixture at many festivals, Thomason's music is as old as his time spent as one of the the Clinch Mountain Boys with the Stanley Brothers and as new as today's newspaper.

I Am An Orphan Child & Intro 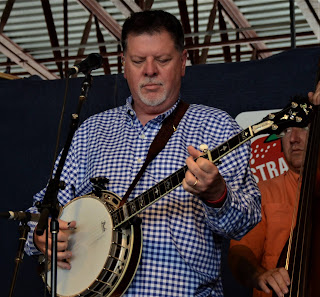 Sideline began its career as an off-season project for several North Carolina bluegrass musicians and has morphed into a phenomenon based on the ability and reputation of Steve Dilling and Jason Moore, while augmenting its personnel with young musicians on their way up. Dilling's son-in-law Skip Cherryholmes carries on the family tradition of his ground-breaking family's band, a popular hit at Strawberry Park more than a decade ago. This band is highly entertaining, and you won't want to miss their sets. 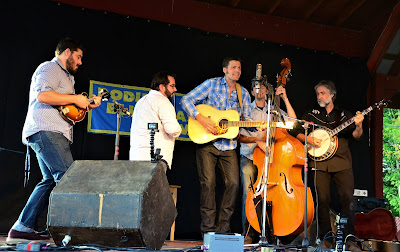 Colebrook Road comes from the area around Lancaster, PA, an area rich in Amish culture and the love of bluegrass music. Much of their music is written from within this quite diverse and highly skilled band. Listen for their version of Paul Simon's "The Boy in the Bubble" for a hint of their versatility Their first album, On Time, will be released on May 3, but I'd bet they'll have copies on sale at Strawberry Park. . 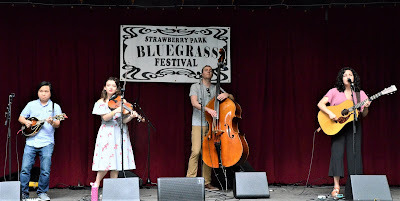 Twisted Pine has grown in popularity as the Strawberry Park audience has come to appreciate their close harmonies and inventive use of modern material. They have been spreading their music farther afield, with performances at the Philadelphia Museum of Art and in Reno, NV in July. They're a Boston-based band who pushes the boundaries while remaining accessible and personable onstage and off. 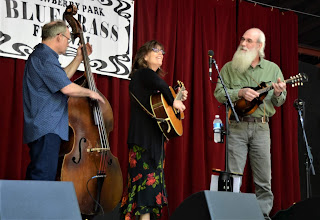 Singer, songwriter Gail Wade has been a fixture in New England bluegrass for at least two decades. She's at home, as can be seen on this preview with her trio creating an intimate environment, or in larger, more raucous settings, as with the Hot Flashes, also at Strawberry Park this weekend. Be sure to hear her in both settings. 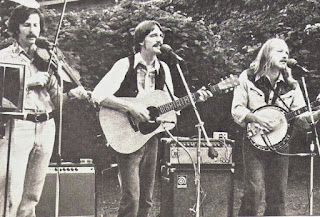 Tom Hagymasi, fiddle; Paul Howard, guitar & lead vocal; and Phil Zimmerman, mandolin and banjo, have been performing as a part of Last Fair Deal for four decades. We often forget the impact that the counter culture bands of the seventies had on the development of music of every kind. As rock and roll developed, so did folk, country, and mountain music into new directions and sounds seen as revolutionary in their day. The Last Fair Deal falls into this category and will provide strong whiff's of nostalgia for the Strawberry Park audience. 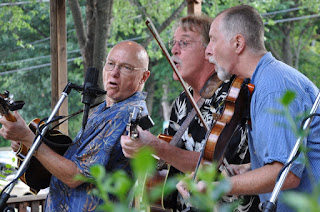 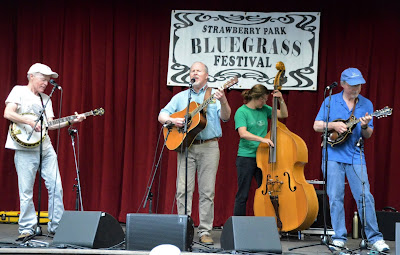 The Stockwell Brothers come from a small village in Vermont where music has been at the center of their lives since high school. In one way or another, brothers Bruce, Barry, and Al, played folk music, rock and roll, and bluegrass around the region, and have continued to base their lives in the arts in one way or another. Bruce's wife, Kelly, joined the band on bass a few years ago. Bruce Stockwell is well-known in bluegrass circles as a teacher, former Merlefest contest winner, and banjo stylist.

In a world increasingly obsessed with youth and sex, The Hot Flashes come as an unapologetically middle-aged, hip, funny, and good band composed of some of New England's best known musicians. Singers Amy Gallatin, Peggy Harvey, and Gail Wade provide voice and instrumental versatility, with dobro master Roger Williams, his son J.D. on Mandolin, and John Urbanik on bass. Peggy provides additional range through her work on clarinet and saxophone, making possible a variety of musical enjoyment not often encountered on a bluegrass stage. Enjoy these enthusiastic and wildly skilled musicians as they have fun together while producing wonderful tunes and a great vibe. 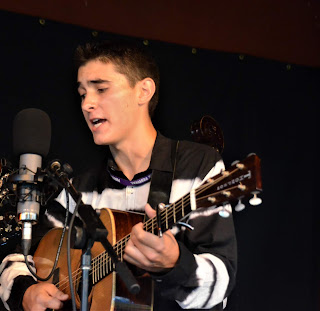 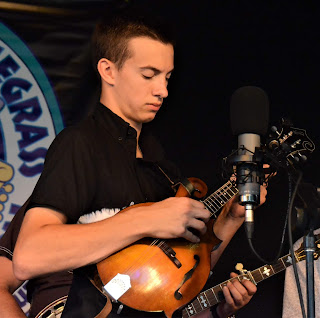 The Zolla Boys continue to improve, as the clip below, from last year's IBMA World of Bluegrass demonstrates, despite continuing to maintain active school careers and other activities. With their Dad, Larry, as well as a new, young banjo player, they've made significant progress while leading active academic and other interests outside music.

This year's lineup at Strawberry Park offers some old favorites as well as finding new ways to express their artistry in interesting and exciting ways. It also introduces you to a major band that hasn't played there before, as well as local/regional bands of several stripes. It looks to me as if you can't miss.

Strawberry Park, located at 42 Pierce Road in Preston, CT, is a large, comprehensive camping/park model resort offering a broad range of facilities and recreational opportunities for families. Early in their summer season, the Park offers two festivals - a bluegrass festival and, the next weekend, a Zydeco festival. One of its jewels is a magnificent outdoor amphitheater, shaded and sloped in such a way as provide wonderful sight lines and to capture sound, funneling it up the hill. 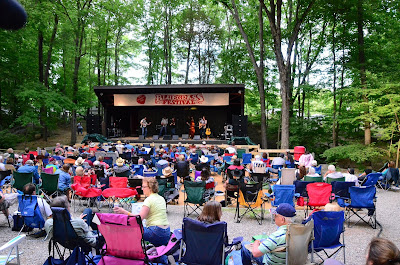 Not unaccustomed to inclement weather, it often rains during the last weekend in May in eastern Connecticut, Fortunately, under its new management, the Park has provided an outdoor alternative adjacent to the snack bar and pools where a significant audience can gather and the show can go on. In the tradition of bluegrass, every effort is made to continue in the amphitheater, but the alternative stage has become increasingly useful as a workshop stage and a bad weather alternative. 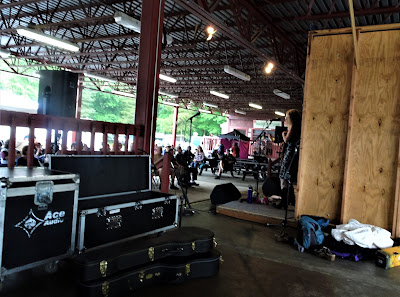 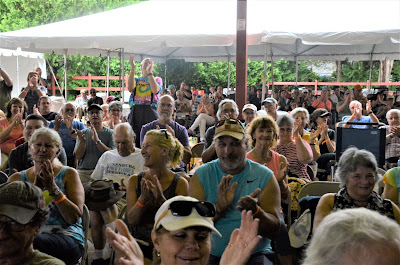 Possessing a wide range of recreational opportunities including pools, a water park, tennis courts, frisbee golf, and more as well as close proximity to two of Connecticut's casinos and the Mystic Seaport Maritime Museum, you can come for a couple of weeks for a comprehensive vacation with great music as well as convenient off-campus alternatives. 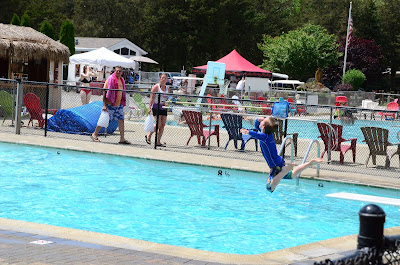 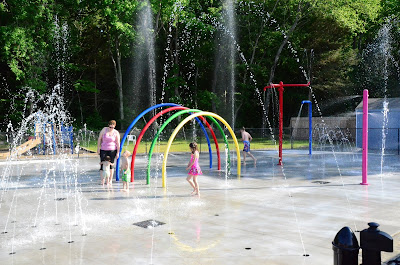 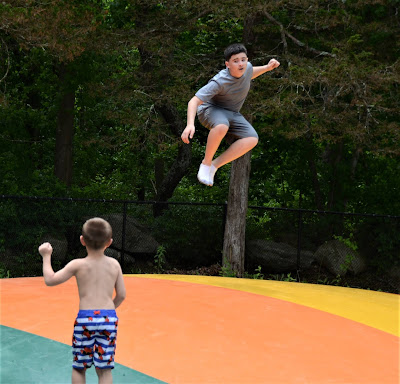 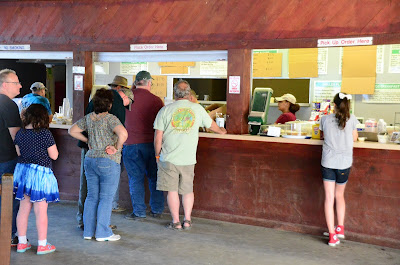 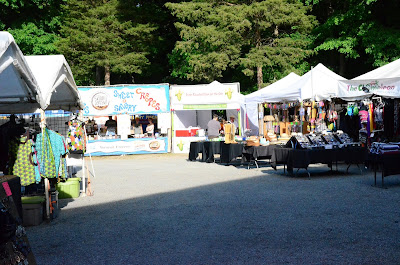 Strawberry Park contains over 350 RV sites for rent as well as a large number of rental park models and deluxe rental trailers. Hot showers and flush toilets are available as well as full hookup sites. Most sites are shaded and the RV area is within easy walking distance of the Amphitheater. For the bluegrass festival, there are two other alternatives. The baseball field, on a plateau above the RV park, is designated as a jamming area, where dedicated jammers can park where 60 spaces are set aside, free for those holding a Full Weekend Pass. There are no hookups on the ball field. In addition, camping in the rough near the park entrance is free with a weekend pass. Consult the park web site for more detailed information and rules. 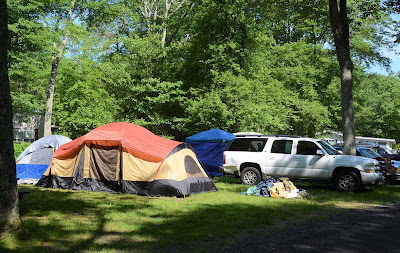 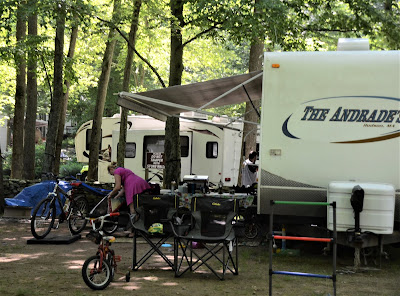 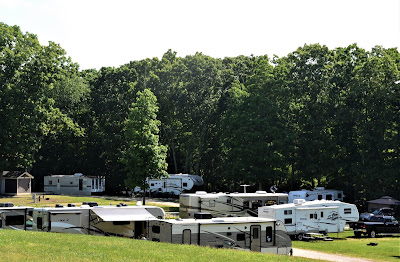 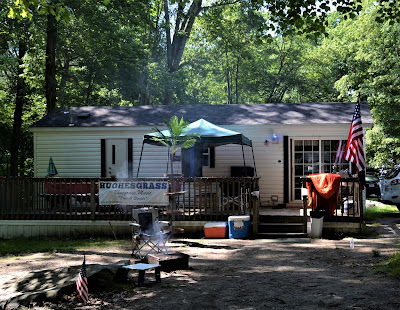 Purchasing Tickets: You can purchase tickets online using their convenient order form and then printing out your completed orders. Tickets run from a day rate ranging from $60.00 (Thursday and Sunday) to $85.00 on Friday and Saturday. A four day festival pass costs $160.00, yielding a free passes for the first and last day as well as a $10.00 saving per ticket for the two major days, a significant saving. You can order online here, or call for tickets at 1.800.356.2460. You can also purchase day or weekend tickets at the gate. 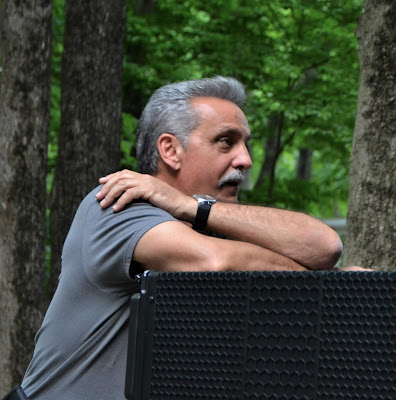