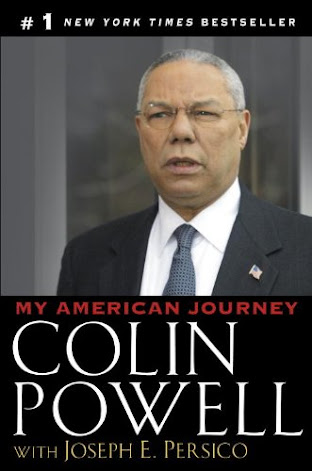 Colin Powell's journey from being the son of immigrant parents from Jamaica and growing up in a working class environment in Queens, New York, New York stands as a shining example of the possibilities for ambitious, upwardly mobile people. A graduate of Queens College and ROTC, he rose to become the highest ranking officer in the American armed forces as well as Chairman of the Joint Chiefs of Staff. Serving under mostly Republican Presidents (Ronald Reagan, George H.W. Bush, Bill Clinton, and George W. Bush) he maintained, in the best manner of an American soldier a neutral political stance while striving go serve each administration in which he worked with the best advice he could, while leading four often competing military services. His story is filled with wit, wisdom, and insight. Until the end of the book, he expresses no political philosophy. At the end, he outlines a moderate governmental viewpoint, which would be a model for us, today, to seek to follow. He turned down an offer from President Bill Clinton to run as his Vice-Presidential running mate, and refused to run for President after retiring from the Army in favor of going home to his wife a family.Colin Powell emerges as likable yet determined to create change in the armed services where necessary and to effect American foreign policy where action, often wished for by the men he served under, would have cost American lives for no good purpose than to meet political goals.My American Journey provides exceptionally interesting insights into our problems today while still relevant and meaning, despite having been published a dozen years ago. Highly recommended

Posted by Ted Lehmann at 7:36 PM No comments: