Since 2007, Irene and I have attended every IBMA World of Bluegrass save one, during which we were traveling. We always found the event to be invigorating, exciting, and enjoyable, meeting people on a professional level we only knew from CD’s, Sirius/xm radio, or festivals. Our first World of Bluegrass was held at the Nashville Convention Center in 2007. While our enthusiasm for the organization and the city of Nashville kept growing, it had become obvious that the powers that be in Music City weren’t as excited about hosting the convention as we were about attending. When the contract ran out, Raleigh was ready for us, and IBMA moved to a new, and more welcoming venue, in 2013. Each year, as the City of Raleigh and IBMA’s relationship ripened, the World of Bluegrass and the associated event hosted by the City called “Wide Open Bluegrass” grew, improved, became more attractive, and attendance blossomed. The positive effects on the City of Raleigh and IBMA were obvious to all. Then Covid-19 closed the country down, and the live event so many of us looked forward to each year was cancelled for 2020.

Almost as soon as the cancelation of this year’s event was announced, the IBMA staff got down to work to plan a way to hold a virtual event designed to meet the professional and personal needs of the membership, as well as seeking to keep the organization alive and functioning while bluegrass music would undoubtedly be encountering an existential crisis. Slowly at first, and then with increasing momentum, a virtual World of Bluegrass Conference and Wide Open Bluegrass Musical event began to emerge in the planning and then the execution.

From the pre-conference Leadership Bluegrass reception to the weekend’s IBMA Bluegrass Live!, the event proved itself to be a rewarding alternative for an audience whose greatest joy in the music can be found in jams and festivals. There were a range of sessions held in the business conference from Sarah Jarosz Keynote Address on  Monday September 28 to The Steep Canyon Rangers final performance on Saturday, October 3. IBMA chose a platform called Swapcard to present this complex event design. People wishing to attend the business conference had to pay, while, this year, music was presented free, but, sadly, is not available for replay due to copyright restrictions. 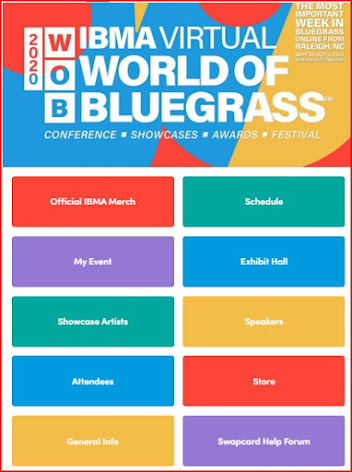 Each component of this complex event contains recorded content consisting of interviews, discussions, musical events and/or a combination. Because the bands themselves were responsible for their own production quality, the showcases varied in quality at two levels, rather than simply the quality and attractiveness of the showcasing bands,. For instance, performance by Dobro great Jerry Douglas with his guest Odessa Settles had superb quality, both because of the quality of the performance and the wonderful recording from Jerry’s home studio. Other performances, however, did not reach this quality level, though most provided a strong musical experience and were acceptable as artistic presentations, too. Many of the featured performances at this year’s IBMA can be found by searching YouTube for IBMA World of Bluegrass 2020.
Paul Schiminger - IBMA Executive Director 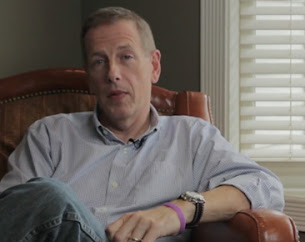 Paul Schiminger, Executive Director of IBMA, said, “We are pleased the community reacted so positively about the experience.  It certainly was a herculean effort.  As with any IBMA World of Bluegrass, it required a large team of people to make it happen.  Certainly a huge amount of work was done by staff in overall management and direct implementation (too many areas to list).  We also have producers of each awards program and for the festival, as well as the Education Committee and many other committees.  The City of Raleigh was definitely involved as a close partner with the IBMA.  They provided support and help in various efforts.  It is terrific to have the City of Raleigh invested in the success of IBMA World of Bluegrass right alongside of us.”

Another example of the cooperation and coordination putting the festival together involves festival partner PineCone. David Brower, the Executive Director of PineCone, the Piedmont Council of Traditional Music, commented “ PineCone and the City of Raleigh were very much involved in the event.  PineCone again served as the producer for the festival Friday and Saturday.  We shot 8 different performances around Raleigh to make sure our city was one of the stars of the event.” Here’s an example of one of their venues.

The virtual event proved to be a huge success for those who attended, but was also a gigantic financial drain to IBMA’s coffers. IBMA professionals and fans can help alleviate these costs and losses by supporting it. Contributions and donations support IBMA and the now merged IBMA Trust Fund, which is a 501(c)(3) charitable organization.

What Can We Learn? There are many lessons to learn from the virtual IBMA in terms of strengthening the organization, increasing its outreach, and helping bluegrass artists, promoters, related businesses, and fans adjust to new realities.

The use of Zoom for presentations, break-out rooms, and performances showed the versatility of video sharing as an effective means of communication. For instance, four of us who have enjoyed breakfast together at the Marriot every morning during IBMA in Raleigh,  got together a couple of days ago to re-cap our experience and share ideas. We spent an enjoyable hour and decided to continue meeting in this delightful way. The random break-out rooms during the Leadership Bluegrass annual get-together were a successful, although too short, way to mix as if we were at a reception.

Zoom constituent meetings were better attended, better planned, and more interactive than many live presentations at the in-person conference have been. Finding ways, in the future, to mix live and virtual attendance could widen interest in the organization, proving productive for the future. Many people who might otherwise be interested in joining and participating in IBMA have been deterred by the expense and perceived exclusivity of the organization. Increased live online presence might prove important to future growth.
For years, a long-term goal of IBMA has been to create and build local and regional affiliates capable of supporting, helping, organizing, and furthering their goals. This has not been accomplished, often because lack of funds made it impossible to hire and support regional outreach. One lesson growing from this year’s virtual experience may be that the organization and its reach can be grown digitally. This might take the form of regional online meetings, support for promoters wishing to work together to build their own events through cooperation with others, or other events I can only imagine.

Bluegrass has been slow to embrace the power and potential of the Internet. As applications become more widely used and digital communication becomes easier and more flexible, IBMA has provided people who have previously relied on fliers, word of mouth, or other less engaging strategies with an introduction to strategies they can use to their own and the music’s benefit. Mutuality leads to strength. IBMA can grow when potential members - promoters, bands, merchandisers, recording companies, as well as interest organizations can more easily reach out to and communicate with each other. That may be the great gift the pandemic has given to IBMA and bluegrass music.

This Farming Life, which we began watching while we were looking for a light-hearted program to end our evening and calm down after streaming a mystery or a thriller, has turned into a go-to program filled with compelling characters, beautiful Scottish scenery, while singing a love song to rural living in a farm setting. Produced by the BBC Documentary Unit, which creates around 2000 hours of video material a year for national and international consumption, by thoughtfully assembling what emerges, in effect, as a lush visual love song to farming, family, and rural living. 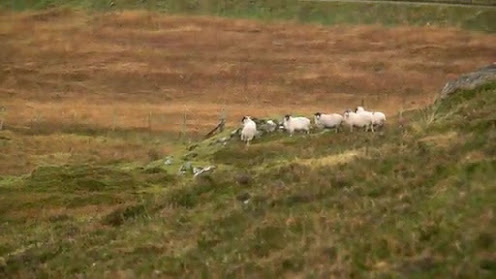 In Season 1 of This Farming Life, five families living in five quite contrasting regions of northern Scotland face the vicissitudes and victories, challenges and successes of life largely governed by the animals they love, the countryside they treasure, and the extremes of weather and climate they endure.

Sandy Granville and his wife Ali are retired London lawyers who moved to The Isle of Lewis, an island several hours ferry ride removed from the mainland, where Sandy became a crofter, a herder of a flock living year-round outdoors in extremely rough country. The herd of sheep is annually put on boats to bring to his farmstead, where they shear sheep, thin the herd, and care for it. 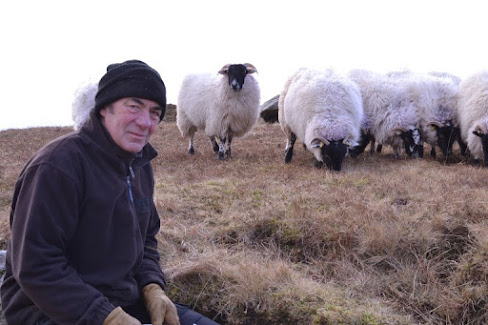 Martin Irvine and his, now, wife Mel farm Limousin beef cattle on a farm near Drummuir on a rented estate where they also care for 600 ewes for the Lord of the manor. Their relationship develops through the year, culminating in a rousing wedding in the eleventh episode. Their campaign to sell cattle at local and regional fairs culminates in Scotland’s largest agricultural fair near the end of the first series. 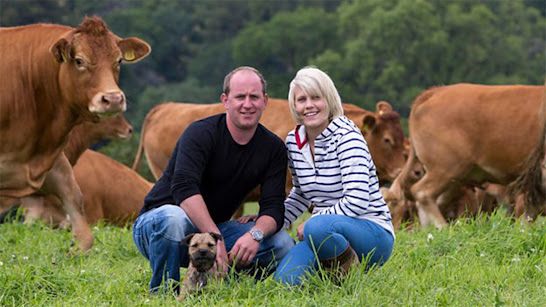 Bobby and Anne Lennox’s Shantron Farm lies near Luss on Loch Lomond north of Glasgow. They are well known for their work with regional youth groups, especially young farmers. Also important in their enterprise is a bed and breakfast business associated with the farm. They and their ancestors have been farming the same land since the 1750’s. 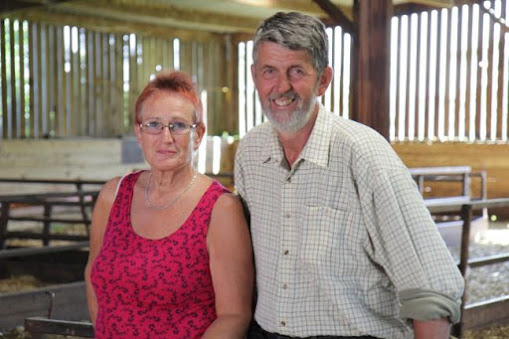 John and Fiona Scott’s family have farmed Fearn Farm for four generations on over 1100 acres they own plus over 650 additional acres they lease. On it, they raise sheep and cattle. John was named “Sheep Farmer of the Year” for 2015 in Scotland. 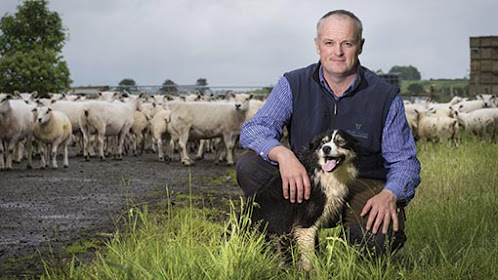 During the first season, the ten episodes follow the families through the seasons, beginning with bringing their herds back to the barns for the winter and then following the seasons of the year along with the seasons of life, relationships, and the work itself. The series never condescends to the characters while accurately portraying the difficulty, danger, and rewards of the work. While their backgrounds are quite different, these are people committed to their work, their animals, and their relationships.

This Farming Life never shies away from aspects of farm life which could provide difficulties for some viewers. The cattle and sheep on these farms are useful for, basically, two things - meat and breeding. Sex and death are constant companions of daily life. This reality is never ignored or disguised, providing language and material which might never be heard or seen on American television screens.

I highly recommend This Farming Life as entertainment and for education. Furthermore, the filming is absolutely beautiful. Scotland’s lakes, mountains, fields, and landscape help define the beauty of the region and lifestyle as well as the commitment to treasure it. Don’t miss this series running on BritBox. Currently there are four seasons available in the U.S. with more to come.
Posted by Ted Lehmann at 10:45 AM No comments: