The Great Jam at BG on the Waccamaw

Backstage at on the Waccamaw is a huge, old warehouse dating back to the late nineteenth century. Each year Miss Willi Chestnut puts out a spread fabled in the bluegrass world as the best food offered to musicians and volunteers anywhere. Musicians ga 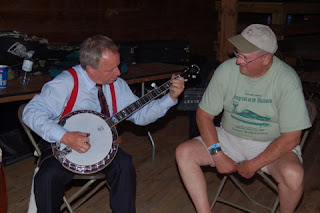 ther backstage to warm up in the far corners of the room, get together to visit and chat with each other, and hang out with those few people allowed backstage to join them. Jennings Chestnut, promoter of this wonderful festival, carefully monitors access to make sure that the performers aren’t overwhelmed by public access and that a friendly, informal environment is maintained. The space is decorated, tables are covered with red-checked oil skin tablecloths, and there are plenty of folding chairs for all to relax in.

After the afternoon’s Lewis Family performance I asked Little Roy Lewis if he would be willing to play my banjo. While mostly recognized as a clown who provides structure and drive to his family’s bluegrass gospel performances, Little Roy is often under- estimated by people for his musicianship. He is one of the really fine banjo players as well as doubling on guitar and auto h

arp. I expected he would play a song or two on my banjo, perhaps lasting five minutes, had it back to me and tell me it was nice. I would have been happy to hear that. Instead, one of those magic moments that happen in bluegrass occurred.

Little started playing. After each piece I thanked him, expecting he’d hand the instrument back. After a while he stopped, pressed on the head, hit a few notes, flexed the head again and said, “The head’s loose; needs to be tightened. Do you have a wrench?” When I said I didn’t, he sent Will Gay to get one from his banjo case. He took the resonator off the back and examined it carefully, noting the good construction and then went around the head, tightening each of the bolts holding it in place, thus raising its pitch slightly and reducing the random vibration. My banjo, which I bought about a month ago, is a Deering Tenbrooks Thirtieth Anniversary, number 20 of a limited edition of 30. Its tone ring is bronze, made in a Swiss bell factory to the specification of Jens Kruger, one of the world’s great banjo players. It’s the best banjo I’m ever likely to purchase, and I’m really a proud owner who doesn’t play well enough to get the most out of it. does.

After tightening the head, began playing again. The difference in tone and power w 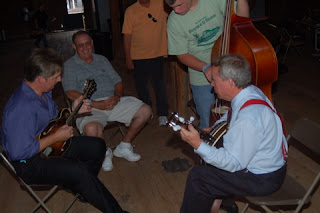 as remarkable. Soon came over and joined us with his 1923 Lloyd Loar built Gibson mandolin. Alan is one of the finest mandolin players in the world. His signature model Gibson is a dark beauty. Recently he picked out one of his models in for us and gave it to Irene during a performance at Down Home in where he sang one of her favorite songs and then stepped down from the stage to hand it to her as she dissolved in tears. Here in she immediately saw an opportunity to hear her mandolin in the jam and ran to get it. Alan and Little Roy exchanged leads and backup as they r 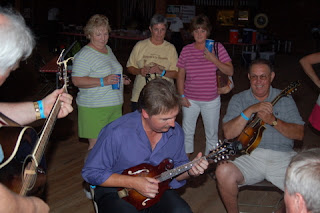 aced through several songs. Alan’s mother and father James were there as well as his wife, Pam. Their presence added to the moment, as it was his parents first chance to see their son with his new band, Grasstowne.

Soon Derwin Hinson, a talented multi-instrument player from nearby picked up a guitar and

joined in. Derwin is a fine lead singer so Little Roy urged him to call a couple of songs, which he did. The music swirled around, each player pushed by ’s speed and invigorated by the quality of the group. Aubrey Haynie sidled up with his fiddle. Haynie, one of the most sough

t after musicians in country music, has appeared as a fiddler in literally hundreds of country albums and has toured with the biggest names in country music. This weekend he is standing in with the Grascals, this year’s IBMA (International Bluegrass Music Association) entertainers of the year, for Jimmie Mattingly, who is on tour with Dolly Parton. Haynie is tall, elegant, and handsome. He dwarfs his fiddle which has a beautiful tone and gives everything he asks of it.

In bluegrass jamming, a player often calls a song other players have never heard before or don’t know well. He kicks off with a chorus and players are expected to pick up the tune and play either backup or to solo when their turn comes. In some ways it’s like a competition, while in others it shows the most complex and intricate cooperation. More like jazz than rock or blues, bluegrass requires both individual excellence and close group cooperation. The complex interplay of the instruments, each taking lead or working together with the other instruments to back up either the soloist or the singer takes skill and in

tense listening. Players are expected, too, to be able to sing choruses in close three part harmony. The total effect is exhilarating and awe inspiring. In gospel songs a fourth part is often added as groups sing a-cappella. Irene and our fellow volunteer and friend Lynn Butler watched, sharing my enjoyment at hearing my new banjo a

nd her mandolin played at their very best. Later Irene continued to watch while spending some time with Little Roy’s three sisters, with whom he has performed for half a century.

Soon, appeared to tell Little Roy that he had five minutes before he was due to take the stage. The band currently playing had two more numbers. kicked off Earl Scruggs’ wonderful song, “Earl’s Breakdown,” a challenging and extremely fast piece. He ripped through it, everyone else struggling to keep up. Later I asked Danny Roberts and Alan how fast they thought had played. In one voice they said, “Too fast!” Alan said his forearm was getting sore from playing at that speed. Danny estimated that Little Roy had nailed Earl’s Breakdown at 180 beats per minute. Phenomenal!!

hit the final notes and leapt to his feet to join his family on stage where they swung into their performance. A magical musical moment that rarely happens was over. The essence of bluegrass had been achieved as five masters of the music, each playing with a different band at the festival had shown how bluegrass is supposed to happen.

According to Neil Rosenberg’s Bluegrass: A History the first bluegrass festival was held in in 1965. It featured present and former members of Bill Monroe’s Bluegrass Boys and there was a large jam at the end in which all participated. In subsequent years many festivals have featured jams in which musicians from different bands join together on stage for a culminating jam. In recent years, however, bands arrive at a festival, play their two sets, and head for the next venue, playing two or three events in a single weekend. The economics of festivals and bands almost require this. The sad part about this behind the scenes jam was that perhaps only twenty or thirty people heard the music, while a thousand or more people outside had no idea that such a magical moment was taking place. Sadly, the tradition of forming composite bands to create a grand finale jam no longer exists. 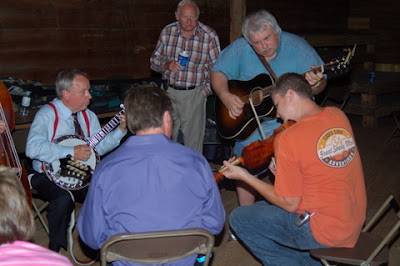