Cindy and Terry Baucom - A Visit 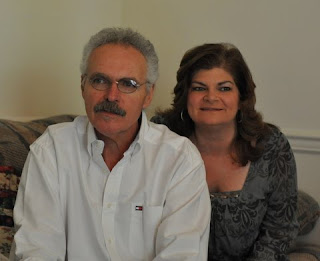 Cindy and Terry Baucom have been referred to as the power couple of bluegrass music.  The name fits, even though these two warm and friendly people have little about them to suggest capital P power.  They found time in their very busy schedule a few days ago to fit in a visit with us in their cozy home in Elkin, NC, which is for sale as they consolidate, planning a move to Union County, near both of their business bases in the Charlotte area.  We drove to their neat, ranch style home in a pretty neighborhood surrounded by pretty homes with azalea bushes in full bloom.  We had about an hour and a half, which went all too fast, before the real estate agent was due to show their home, which was, unfortunately stripped of the memorabilia of two busy and historic careers in bluegrass due to the demands of the looked for sale. 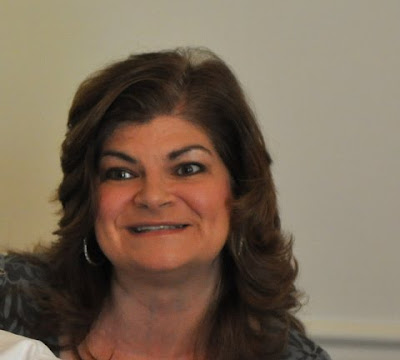 Cindy is the more animated and chatty of the two, sometimes, in her enthusiasm, speaking for both, while Bauc is more reserved, almost shy, while still being forthcoming and thoughtful.  As host of the syndicated radio program "Knee Deep in Bluegrass," now picked up by around 100 AM and FM commercial radio station around the country, Cindy has worked tirelessly to spread the word about bluegrass music the country in her two hour weekly program. In 2005, Cindy earned a well-deserved IBMA award as broadcaster of the year.  She grew up in a bluegrass family.  Jim Brooks, her late father, was a bluegrass musician who early on took her on trips to the local fiddler's conventions as well as to storied bluegrass venues like the long-gone and much missed Sunset Park near West Grove, PA.  She attended Wilkes Community College in Wilkesboro, NC, where her broadcasting career began.  Fittingly, the WCC campus is the home of the mega-festival Merlefest, where Cindy has frequently served as one of the emcees.  When found back stage, she always seems to have her recorder in hand and to be interviewing bluegrass musicians for Knee Deep in Bluegrass. 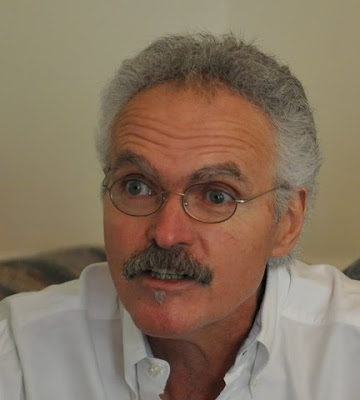 Terry Baucom has been the founding member of more bands than many other pickers have played in.  Among them are Doyle Lawson and Quicksilver; Boone Creek; Lou Reid, Terry Baucom & Carolina;  Baucom, Bibey & Blueridge; IIIrd Tyme Out.  Having been a member of any one of these bands would represent a high point in most careers.  Known as "The Duke of Drive" for his hard driving traditional style,  Born in Monroe, NC, Bauc has been able to make a living as a banjo player for forty years, and at age fifty- seven is in top form.  Recently, Deering Banjos began producing the Terry Baucom signature banjo.  He will be touring with at least four bands during the coming festival season, beginning in May with his second trip to Japan organized by Maro Kawabata. He continues to tour as a member of the Mashville Brigade and as banjo player with Mountain Heart when they play with Tony Rice.  He will also be rejoining Doyle Lawson for an upcoming reunion event.  With all this, Terry also manages to maintain an active teaching schedule. Terry at first appears to be somewhat reticent and reserved, but his shyness disappears as he talks about the influences on his play, his busy career, and his association with Deering Banjos.
Poster of Early Japanese Tour 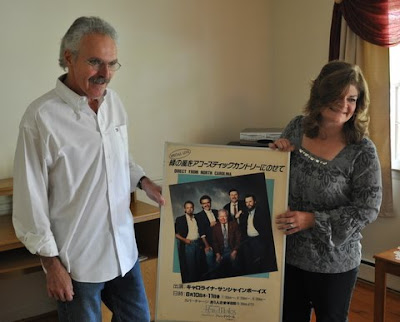 Our conversation was wide-ranging as we looked at this couple's separate careers and chatted their backgrounds in the music and sense of responsibility for continuing to spread and develop it.  Both are strong advocates of developing a more professional approach to enabling musicians to make a living in music and are active members of the International Bluegrass Music Association. Cindy currently serves on the Board of Directors of IBMA, and both have been winners of IBMA awards, Bauc as emerging artist in 1994.  Each asserted the importance of continued change and development in bluegrass, maintaining that new, innovative, and creative bands reaching out to a new and younger demographic were hugely important.  They also emphasized the need for continued respect and cherishing for the founding bands, whose efforts created a revolution in country and acoustic music during the forties and fifties. It is this combination of respect for the past and continuing creative efforts of change and development which will assure the evolution and expansion of the music to new audiences and, indeed, new parts of the world.  Bauc's upcoming trip to Japan stands as evidence of the worldwide appeal of bluegrass music. 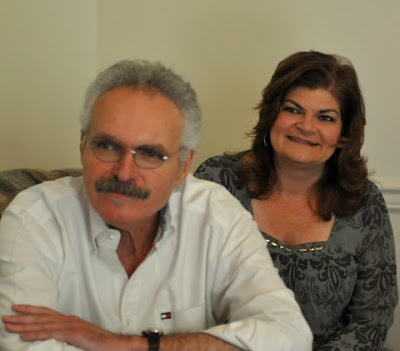 It was truly a delight to spend some time with this busy and engaging couple whose work stands as a testimony to what the Boomer generation has brought and continues to bring to bluegrass music.
Posted by Ted Lehmann at 5:59 AM