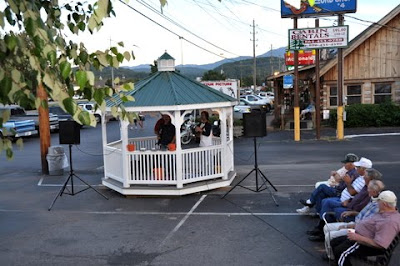 Last evening Irene and I drove from the bucolic atmosphere of the Dumplin' Valley Farm RV Park, where the Dumplin' Valley Bluegrass Festival begins at noon tomorrow, down the highway to Pigeon Forge.  Along the route we braved the honky-tonk jumble of arcades, permanent carnival rides, MAJOR attractions (and lots of minor ones), hotels, motels, restaurants, tattoo parlors, and assorted other locations designed to move tourist dollars into more worthy pockets in order to find the small strip mall where a gazebo is situated in front of the Ernest Tubb Record Store #4.  We were on our way to visit with our friend Jerry Butler who, along with the other Blue Valley Boys, appears here four or five nights a week singing bluegrass for tips.
Dave Cantrell, Floyd Bailey, & Jerry Butler
The Blue Valley Boys 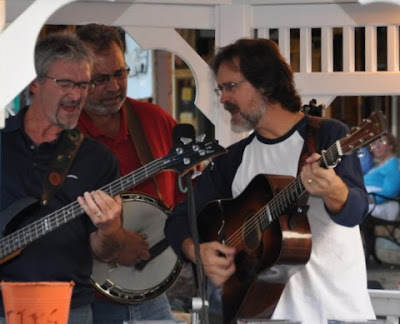 A friend of mine, who's an astute judge of bluegrass music and viewer of the scene said to me a year or so ago that he thought Jerry Butler was one of the finest singers in bluegrass music.  Beyond that, he mentioned that every band Jerry has joined improved because he was a member and, once he was forced to leave it, never again was as good as it had been when he was a member.  We've known Jerry as a performer and personal friend for several years, and have always found him to be personable, honest, and hard working...a good companion and a fine performer.  Recently, he has formed a band called Jerry Butler & the Blue-J's, released a record under Blue Circle Records, and begun touring in this very difficult environment for new bands.  "Haulin' Grass" is an enjoyable, and sometimes surprising, collection of bluegrass songs dealing with trucking and the road. 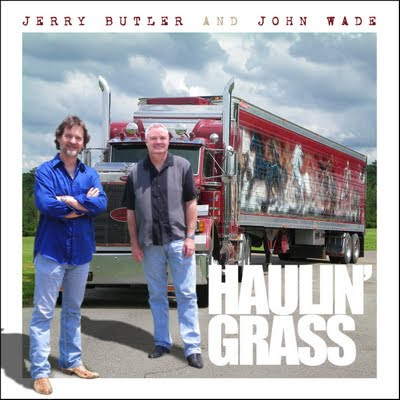 Jerry and The Blue Valley Boys perform nightly at the Gazebo in front of the Ernest Tubb Record Shop #4 along the strip in Pigeon Forge.  Other shops in the small strip mall include an Internet Cafe selling very good ice cream, a magic shop, and several others.  The strip was extremely busy for a post-Labor Day Tuesday, perhaps because there was a large car show in town with very fancy classic and antique cars parked in the store parking lots for several miles.  When we arrived a small crowds was seated in a square formed by park benches and a free-standing covered deck where customers of the Internet Cafe could enjoy their ice cream.  People came and went during the three sets.  Towards the end of the second set, and during the third a couple of cloggers performed, and people were encourage to dance.  The crowd varied from, perhaps 30 to maybe near 100 people.  At the end of each set a tip bucket was passed and people were encouraged to contribute or to purchase CD's produced by various iterations of the Blue Valley Boys who have performed in the location over the years.  The music was considerably better bluegrass than many of the people clustered around the Gazebo recognized, as the Boys played bluegrass classics with enthusiasm and skill. 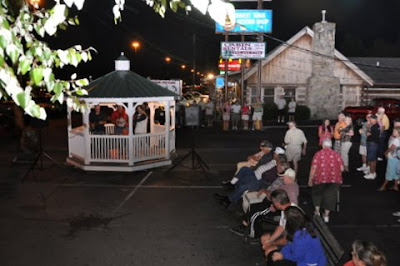 What came to my mind as we watched this performance for  a couple of hours was how hard it is to make a living in music and how deep the talent pool really is.  At different times in our lives we've visited piano bars and heard wonderful musicians sing Gershwin and Cole Porter with wit and skill.  We've seen Celtic bands play in a shopping plaza in New Brunswick, Canada, and read about the great violinist Joshua Bell's busking in the Washington, D.C. subway, as an experiment, and only making a little over twenty dollars in tips.  I don't know how much money The Blue Valley Boys made last night, but I do know it was less than their effort and skill deserved. 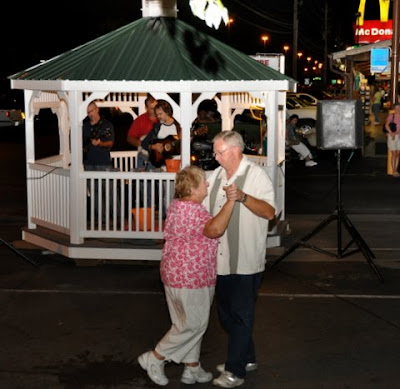 So, hats off to the many able musicians who you see playing good music in your travels.  Next time you come across one, drop a few bucks in the tip jar and buy a CD.  Know that you're contributing to a good cause and keeping good music alive for the joy of many people and helping a working musician keep body and soul together until the next gig.
Jerry Butler 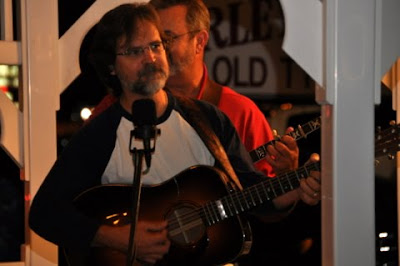