Rhonda Vincent is one of the hardest working troopers on the circuit in bluegrass today.  She tours about ten months a year and consistently puts in 120 to 140 appearances a year everywhere in North America.  She'll be touring in Europe this year during the second half of July.  Based in her highly recognizable Martha White Express touring bus and offering Rhonda Vincent merchandise from the Martha White Boutique at festivals, Rhonda is highly visible and always approachable.  I've watched her at many festivals tired from working, hot, or sick or cold stay to greet her fans who've waited in line to see her and get their picture taken with her.  She stays outside until the last fan has had a few moments of her time.  She never rushes everyone, and she always seems to be hearing the comments for the first time.  All these elements show a seasoned professional who knows her job and relishes doing it.


Rhonda & The Rage in Performance - Slide Show
Rhonda comes from Kirksville, MO where her family has long been a bluegrass fixture, hosting the Sally Mountain Show and will this year be hosting the Sally Mountain Festival again, as well as celebrating her parent's fiftieth wedding anniversary.  Rhonda recorded her first solo album in 1986, making 2011 her 25th year as a bluegrass professional. During that time she has released fourteen albums as well as a number of singles and made countless guest appearances.  After a brief sojourn and two albums recorded in country music, Rhonda returned to her bluegrass roots where she has forged a remarkable record of achievement and high recognition.
Rhonda Vincent & The Rage at Podunk 2010
"I've Forgotten You" video by Steve Ide
Rhonda's recognition from within the profession can be seen from the remarkable record of awards from the International Bluegrass Music Association since 1999.  Three time Recorded Event of the Year, 2004 Song of the Year for "Kentucky Borderline, Entertainer of the Year in 2004, and Female Vocalist of the Year from 2000 through 2006 establishes her as one of the top bluegrass performers of the twenty-first century. For me, her song All-American Bluegrass Girl tells her story and connects her to the history of bluegrass's earliest days.

Rhonda Vincent: Fans, Friends, & Fun - Slide Show
Rhonda is proud of her two daughters, Sally and Tensel, who now tour as Next Best Thing.  Along with husband Herb Sandker, who serves as her manager and best friend, when he's not on the golf course, the family is a close knit unit.  This family was recently joined by Rhonda's long term fiddle player, Hunter Berry, when he and Sally were married.  The video below shows Rhonda and the Rage in performance with her daughters' band.  Good fun at Podunk. The Rage consists of  Hunter Berry on fiddle and mandolin, Aaron McDaris on banjo, Mickey Harris on Bass, and Ben Helsen on Guitar.  The band, many of whom are award winning performers in their own right, provide a perfect vehicle for supporting Rhonda's singing and sparkling stage personalith.
Rhonda Vincent & The Rage with Next Best Thing
Video by Steve Ide
Eric Gibson may have said it best.  After The Gibson Brothers had spent three days at a festival in Alberta, Canada with Rhonda Vincent & The Rage, he commented that he'd always been aware of Rhonda and admired her work, but really didn't know her well.  In Alberta their merchandise tables were next to each other. Rhonda and her mother also substituted with Eric and Leigh in a vocal harmony  workshop when the scheduled duo couldn't appear.  He commented how much he had enjoyed getting to know Rhonda and what a thoroughgoing professional she is.
Rhonda Vincent & The Rage: "All American Bluegrass Girl
from Darrington Bluegrass Festival - Video by Wellusedtube
Rhonda Vincent's latest CD can be ordered from her web site, Amazon, and other online sites or purchsed at the Martha White Boutique wherever Rhonda Vincent & The Rage are performing. 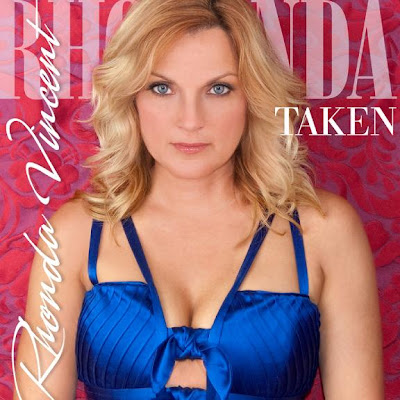