The Gibson Brothers at Their Home High School

We arrived home from three and a half months on the road on Wednesday afternoon, tired but satisfied we had seen lots of great music, visited with many friends, and had a successful winter and spring bluegrass season.  We had decided to stay home on Friday to rest, but the lure of seeing The Gibson Brothers play before their home town audience at Northern Adirondack Central Schools was too much, so, around noon, we headed north across New Hampshire and Vermont to Ellenburg, NY.  After stopping at a large RV dealer near Burlington, VT to prove to ourselves that we're really satisfied with our current rig, we continued north, leaving the Interstate to drive up the picturesque Lake Champlain Islands, which often remind me somewhat of Prince Edward Island. While we knew the lake was high, we weren't prepared for what we saw.

Water lapped at the roadside of the causeway from the mainland onto Grand Isle, the southernmost of the Lake Islands.  At Sand Bar State Park picnic tables floated around and a stone building had water eighteen inches or so up its side. The water had obviously receded from its high point earlier in the week.  Compared to recent flood damage along the Mississippi or this week's tragic tornado in Joplin, the damage was actually slight, but impressive and frightening nevertheless.  Traversing Grand Isle, South Hero, North Hero and back to the mainland near Alburgh we saw water lapping at the road where jersey barriers and sand bags held it back, mobile homes with water up to their windows, docks under water, and clean-up going on.  And since then the rain has continued and wind blown up waves on the lake to continue the destruction.  While the national news doesn't cover such damage, the effect on people who live in the affected areas is every bit as difficult as better known flooding elesewhere.  We crossed into New York at Rouse's Point, a major border crossing and yachting town catering to Canadians from the Montreal area to see not a single sailboat in the water this late in May. Unusual at best....

Rouse's Point is just few hundred yards south of the Canadian border.  Our route lay west along U.S. Highway 11 never more than a few miles south of the border.  The Adirondack Mountains' jagged profile rose in the mist far to our south, and Lyon Mountain, the location of the Gibson Brothers' great song "Iron and Diamonds" stood out just north of its larger cousins.  We crossed the Great Chazy River, filled to the brim, more times than we could count.  The land is flat, and what was once productive farmland has gone to seed, along with the villages through which we drove.  People as well as productive capacity have left a region that looks and feels desolated.  Driving through this hard-scrabble land always reminds us of the iconic Gibson Brothers songs like Farm of Yesterday, The Barn Song, The Railroad Song, Bottomland, Safe Passage, Sam Smith, and others.  The roots of the Gibson Brothers' experience can be found in the North Country, not only in what it has lost, but in the tough, good-natured survival instinct of those who remain.  This is now, and perhaps always has been, a land of survivors who know what hard work and sacrifice are all about. 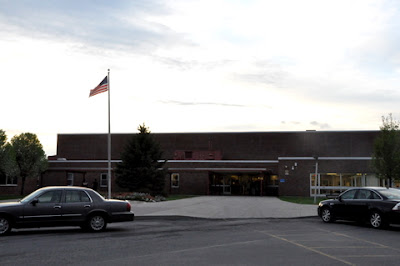 We arrived at Northern Adirondack Central School early, as usual, and went inside to discover that the first two rows of the auditorium were leaking water through the floor, as the water table was so high it couldn't be contained.  The first two rows of the raked floor were cordoned off to keep people from slipping or injuring themselves.  A girl's softball game was going on outside, the league trying to make up games lost to the season's continuing rains.  A crew was vacuuming up the water, but couldn't stay ahead of the leaking.  We met Shari Colvin-Dauginault in line outside with her mother.  They had driven the nearly 170 miles north from their home near Albany for this concert.  Shari told us this would be one of thirteen Gibson Brothers concerts they would attend this year.  They buy day tickets to large festivals just to attend the Gibson's portion of the show.  That's the kind of fans this band attracts.  An hour before the show was to begin, a sizable crowd was waiting patiently at the door while outside the black flies swarmed and chomped away. 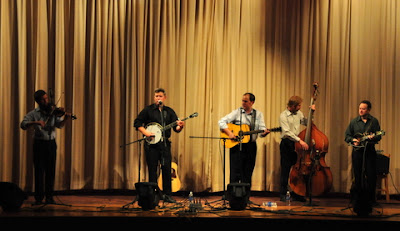 It was hot and muggy inside the auditorium.  The light was set low to reduce the amount of heat being generated indoors.  The seats were nearly filled for a Friday evening show as the Gibson Brothers took the stage shortly after seven.  The crowd cheered. Eric and Leigh Gibson looked out at  the audience, filled with high school classmates, colleagues of their sister Erin who teaches second grade in the district, cousins galore, friends from their very earliest performances, and, of course, their parents, now retired from the farm and looking better than they had in some time.  A Gibson Brothers show in Ellenburg Depot is always a joyous event.  They perform fairly frequently in the North Country, as this part of northern New York is known, because they've become the go-to group to perform for a variety of benefits in the region.  This concert was sponsored by a local organization supporting elder housing.  Perhaps the title song of their new CD "Help My Brother" grows from this environment.
The Gibson Brothers - Help My Brother - Video
Eric and Leigh with their fine band, put together to support the music and sound they create, sang songs from their large catalog including many from their new CD, "Help My Brother" which reached #1 on the Bluegrass Unlimited charts this month.  This is the sixth consecutive Gibson Brothers album to top the charts. It displays, with increasing power, the confidence the Gibsons have in their own song writing and the sure touch they have developed as a touring band.  Their ability to work off the cuff without a standard set list or humor routines shows their increasing sense of exactly who they are and how to communicate themselves to their audience. Each set is built in response to the audience's reactions and requests.  While being especially relaxed in their home setting before what is always an extremely friendly audience, they always hit the right note personally as well as musically.  This relaxed sensibility pervades their performances wherever they appear,  ranging with increasing breadth throughout the U.S. and increasingly in Europe, too.  They leave for the Yukon and British Columbia right after next week's Strawbery Park. Last year they traveled to Ireland.  Their audience of loyal supporters grows with every performance.
Eric Gibson 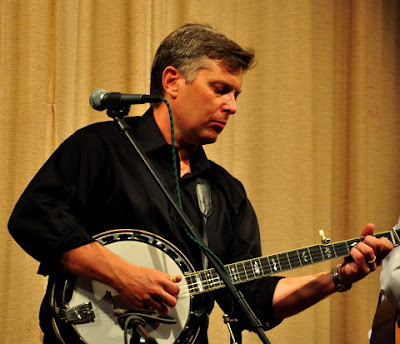 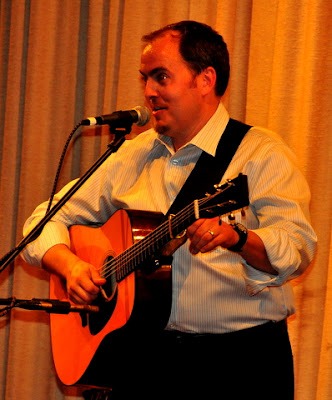 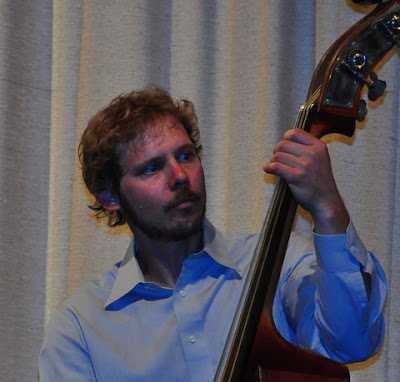 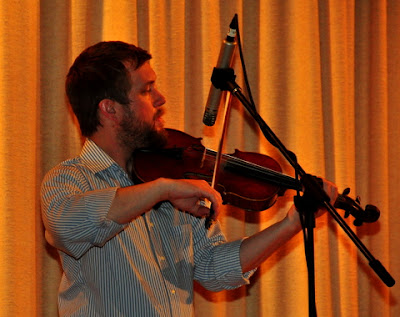 Due to a previous commitment, Joe Walsh could not appear with the Gibson Brothers at this concert. It was a delight to Jesse Brock, a long-time friend of the band and former winner of the IBMA Mandolin Player of the Year award as a substitute.
Jesse Brock 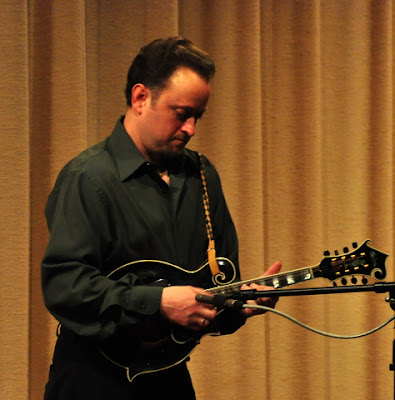 The crowd, the band, the setting, the weather, and the music all affected this concert.  Not only does "Help My Brother" top the BU chart, it's also at the top of the album chart of Bluegrass Music Profiles magazine as is their single "Walking West to Memphis" by Chris Henry.  Here's this hit as performed on Friday evening.
The Gibson Brothers - Walking West to Memphis - Video
Eric Gibson and Erin Gibson LaClaire 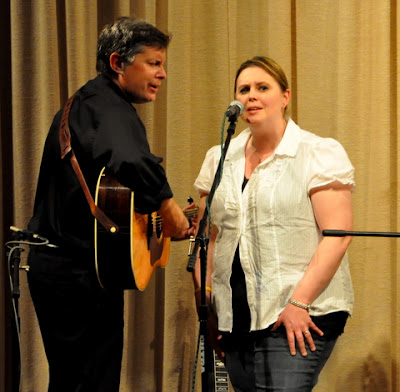 A Gibson Brothers show in Ellenburg Depot often turns into a family affair.  Their sister, Erin, now teaches second grade at Northern Adirondack, where she happily stays home with her husband Matt and their children.  In earlier years she sang with her brothers, mostly in church, and people coming to see the Brothers at home are always eager to hear Erin sing with them.  She sang three songs on Friday evening, including the one she's recorded with her brothers.  Here's "The Lighthouse."
Erin Gibson LaClaire with The Gibson Brothers
The Lighthouse
Eric's song Kelly, named after his grandfather, also played a song he had written.  I think this is the first time he'd soloed from the stage.
Kelly Gibson 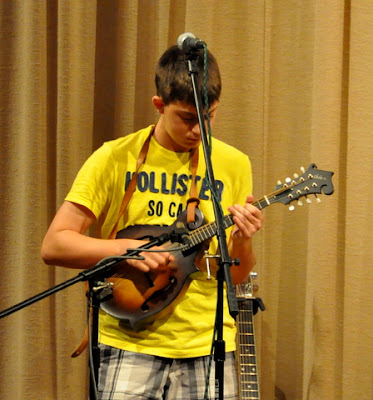 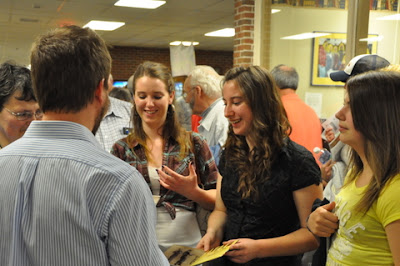 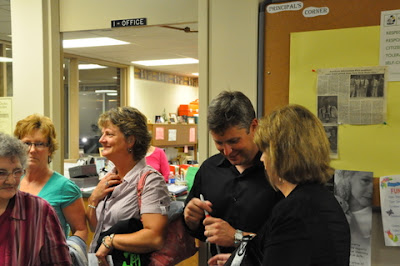 So what does all this add up to. A hard working band that  has achieved remarkable success based on years of touring together, building their repertoire, writing the best original work performed by any band, and never ceasing to be themselves.  Their harmonies have become the gold standard, rivaling the best brother duos of all time.  Their stage presence and performance skills seem natural, but grow from their comfort with each other and confidence in their audience, two shy men who prefer not to over-sell themselves always being wry and funny. All this comes at the moment the IBMA ballots are in the hands or on the computer screens of members preparing to undertake the first stage of the nomination process for bands, recordings,  and individuals. The Gibson Brothers deserve serious consideration for Entertainer of the Year, Vocal Group of the Year, Album of the Year, and several individual awards.  'Nuf said....
Eric & Leigh Gibson 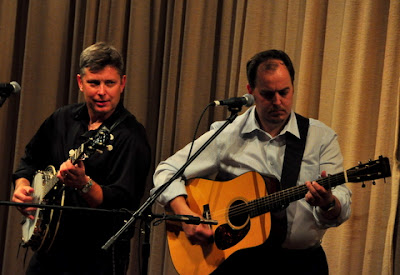