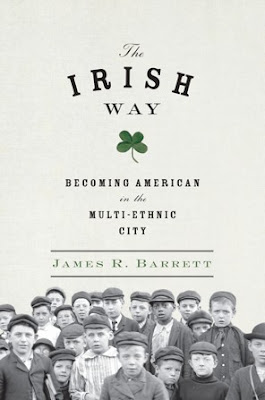 The Irish Way: Becoming American inthe Multiethnic City by James R. Barrett (Penguin Press, 2012, $29.95, 384 pages) is a part of the distinguished Penguin History of American Life series. Narrowly viewed, the book is a social history of the rise of Irish immigrants during the nineteenth and early twentieth centuries from their flood of immigration let loose on America by the potato famine of 1845 – 1852, which drove millions of impoverished, starving Irish Catholics to seek a better life in America to their acculturation and rise to political and social prominence in America during the middle half of the 20th century. In a larger sense, this interesting, well-written, and thoroughly annotated volume, by focusing on a single ethnic group's history in America, provides a template for understanding the Americanization of all immigrant groups who have come to the United States to survive, and who have thrived while each contributes its own flavor to the larger American culture. To understand the path of the Irish to full status as Americans is to understand the pathway of all Americans as well as the process by which our nation continues to enrich itself with the ambitious seed of the entire world.

This is a story focusing primarily on American cities, particularly New York and Chicago, where the Irish came and stayed. Much of the basis for Irish success in America came because of their tight cohesion in urban centers as they built Irish neighborhoods centered on local Catholic Church parishes presided over by a largely Irish priesthood and hierarchy. As their control of neighborhoods solidified, they gravitated toward politics and, through the power of patronage, gained control of local police, fire, and even schooling in urban centers. The rise of powerful urban political machines with the ability to marshal votes and hand out jobs, assured their long-standing hold on political power, even when later immigrant groups eroded their population advantage. Their sense of clannishness was strengthened by a deep-seated resentment of Anglo-Protestant power structure that had held power in the United States since earliest colonial days. This resentment, born of 800 years of repression in Ireland as Anglo-Saxons sought to overcome the Celtic culture and Gaelic language in Ireland fueled an anger that manifested itself as a deep and wounded pride. The power of nativists and Know-Nothings in the nineteenth century to seek to keep control of the country was supplanted in the late nineteenth century by similar anti-Catholic efforts by the Ku Klux Klan in the twentieth century. This latent anti-Irish, anti-Catholic strand of American life only came to an end with the election of John F. Kennedy, whose name is not mentioned in this volume, in 1960. Today, the Irish are firmly established at ever level of American society, while Irish politicians, educators, and law enforcement still hold a strong role in urban centers across the country. 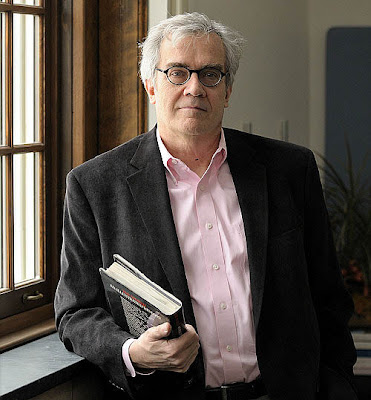 James R. Barrett is a professor of African American History at the University of Illinois, where he specializes in social and labor history and the radical tradition in the U.S. He describes the rise of the Irish from their initial impact as menial laborers who lived in dire poverty through increasing influence and dominance in their local parishes, their rising power in the workplace through organizing efforts in unions, their cultural influence as entertainers and cultural stereotypes, their control of urban political machines, and their enormous influence on the nation as a whole as we spread across the continent.

Barrett cautions against viewing Irish influence as monolithic. In addition to wielding power through political action, and sometimes through physical force, the Irish gathered together in social institutions which often served to provide education and health care to the destitute and needy. Irish women in America not only became nuns involved in providing medical services and teaching, but served as radical leaders in the suffrage and union movements, organizing women to greater influence in American society. Catherine Sanger became a great pioneer in the move to help Irish women gain control of their lives through limiting the size of their families. While, like other immigrant groups in America, the Irish have move successfully into the middle and upper-middle class in succeeding generations and become increasingly conservative in the passage, they also recognized that in order to maintain their influence, they had to find common cause with other immigrant groups as they arrived in America. Italians and Jews, coming to the cities found the Irish already entrenched and viewed them as models for what being “American” meant. Irish politicians and union organizers often found it expedient to make common cause with these immigrant groups as well as the migrant African-American population arriving from the south.

Irish American influences have been incalculable in the forging of the larger American self-concept over the past 150 years. Major sports figures, especially in baseball and boxing, contributions to American English slang (speakeasy, swell, turf, phony, etc.), entertainers from Gallagher & Sheen through James Cagney to Bing Crosby and Martin Sheen, as well as politicians from Boss Tweed through Al Smith to John F. Kennedy and his brothers all have helped form our current selves. Their influences have been both conservative and progressive, and this duality continues to shape our national consciousness. All this was aided and abetted by the fact that the Irish came to American mostly speaking English already. They have remained the most literate of all immigrant groups in the country. In the late nineteenth century, 95% of Irish immigrants spoke and wrote English. (127) Much of this was fueled by Irish-American women who moved into teaching and nursing in higher proportions than men entered skilled or managerial positions. Parish and political networks helped Irish women get jobs in schools, as clerks in government, as telephone operators, and as retail clerks. They also became active in union organizing.

For Americans who believe the current Hispanic wave of immigration is unusual or the language issues raised by it dangerous, TheIrish Way illuminates the current welling of nativism within a continuing pattern going back at least to the early nineteenth century when teeming immigrant groups competed with the (primarily) white Protestant power structure for political and economic influence. Laws have consistently been entered into Congress and state legislatures requiring immigrants to speak English or limiting immigration from various ethnic groups. Fear and hatred of the hoards of alien newcomers have been a constant theme of American life. Perhaps the most high profile examples can be seen in the anti-Chinese agitation during the 19th century and the internment of Japanese citizens during World War II. In all cases, however, immigrants and migrants have eventually mastered English and moved into the mainstream of American society making significant contributions to our economy and our culture, enriching both.

The Irish Way: Becoming American inthe Multi-Ethnic City by James R. Barrett offers serious social history for the serious reader in a most approachable and cogent fashion. The book is both highly readable and well supported with nearly 100 pages of notes and a comprehensive index. It examines the movement of the Irish in America from being an impoverished and often reviled immigrant group to the core of American life. The book is published by The Penguin Group as a part of their History of American Life series. I read the book in hard cover format, having received it from the publisher through TLC Book Tours for review.