The following blog entry was written by my friend John Saroyan and originally posted in Jim's Roots & Blues Calendar. John Saroyan is a member of The Manhattan Valley Ramblers and a pediatrician living in New York City.

Eric Gibson tunes his new Henderson guitar.
While I hesitate to dedicate a single blog to the exceptional talents of one brother, Eric and Leigh Gibson are artists of such creative depth and musical honesty that I am unable to give them both their due in a single go. As the title pronounces, this one is devoted to Eric.

Banjo and Guitar: Eric’s banjo touch is sometimes fleet and other times punchy, closer to Earl Scruggs on breakdowns but J.D. Crowe on fills. His chucks come closer to Crowe’s than anyone I have heard because of their fine percussive click. He can also rock the five-string. The earliest rumblings were in R&B covers found on Red Letter Day (“It’s All Over Now” and “I Got A Woman”) and on the subsequent album, Iron and Diamonds, with its the masterful arrangement and pulsing banjo riffs for Tom Petty’s “Cabin Down Below.” For bluegrass or songwriter fare, he delivers harmonically rich solos with confidence and invention while always avoiding too much clutter. His banjo introductions and hooks on songs such as “Sam Smith“ and “Callie’s Reel“ can make the songs go viral in your head with their catchy repetition. Eric’s finest banjo solo may be his bluesy jaunt for “Walkin’ West to Memphis“ which he kicks off with cascading arpeggios that lead into single-note string bending and pull-ups on repeating double stops. His guitar solos are markedly complementary to Leigh’s bluegrass flatpicking and highlight a more country inflected approach with vibrato, slides and bends. Soon after he switched his recording and touring banjo from a pre-war Gibson conversion to a Deering Tenbrooks Legacy, he also changed from his Gallagher G70 to a Henderson Brazilian D28 (pictured).

Vocals:  The spine-tingling magic of the Gibsons’ duets is already writing them in the annals of bluegrass. Eric’s unvaryingly keen tenor meshes the duo’s harmonies when Leigh is singing melody. The influence of the Bakersfield sound on the band’s acoustic backing extends to the influence of musical heroes Haggard and Owens‘ on Eric’s singing. “Farm of Yesterday“ conveys introspection so unabashedly that at times he almost speaks the lyrics rather than sings them.

Songwriting: Eric achieved the status of a regionally known bard early in life. Songs such as “Hesseltine Hill,” ”We’ll Stay Here” and “She Paints a Picture” would be a source of pride and accomplishment for a songwriter at any age but particularly one in their teens or twenties. Eric’s “Farm of Yesterday” rightfully continues to draw national attention because of its majestic descriptions of the brothers’ love for their mother and father. When I think of another touring bluegrass artist who continues to consistently write melody and lyrics with an emotional pull as strong as Eric’s, I think of Leigh.

Genius: The underpinnings of Eric’s craft and the depth of his technique are apparent on stage and recordings. But like a pitcher whose form and effect are awe-inspiring, the fans just sit back and enjoy the drama. The countless hours of practice don’t come to mind. Only the fact that this one was born to play. 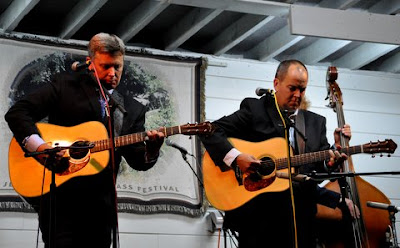