Out of Order by Sandra Day O'Connor - Book Review 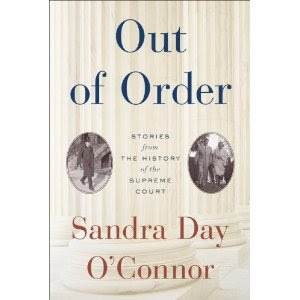 Well written history can be more gripping than a good novel, help the reader develop deeper insights into our world, and develop greater understandings about the people involved. The Supreme Court of the United States is perhaps the most opaque branch of our government, working in secret sessions, writing opinions behind a wall where the only insight into the discussions is seen in the arguments made when a decision is handed down. We don't have much of an understanding of the Justices as people beyond their history, previous writings, and ocaissional speaches to law students and other lawyers and judges. Sandra Day O'Connor's chatty book Out of Order: Stories from the History of the Supreme Court does little to address these issues and thus becomes a minor contribution to the literature of the Supreme Court. By contrast, Jeffrey Toobin's The Nine, written with careful journalistic insight, and to which Justice O'Connor herself was reputed to have been one of the major sources, casts light on the politics and workings of the Court in exciting and useful ways helping us to see more deeply into a mostly hidden world. My 2007 review of The Nine can be found here.

O'Connor's story begins with the early years or our republic and seeks to trace the development of the Court's power and influence over its history, focusing on cases that defined its role and the people whose work gave its added clout. She seeks to place the Court's role, people, and interactions with other branches of government within an historical context, but by not providing sufficent illustration, her writing often becomes mired in lists of appointments by various persidents and brief recountings of landmark cases without sufficient context to give them meaning. Seeking to list the important and influential Justices, her narrative devolves into a list of the names of Justices appointed by each president while not really making them important to the reader. While, in a later chapter she discusses Justice Douglas, she neglects his appointement in her catalog while heaping fulsome praise on Justice Byron White which is tedious at best. In discussing the movement of the Court from New York to Philadelphia before finally settling in the District of Columbia where it moved through a variety of courtrooms until the current Supreme Court building was erected in 1935 she again becomes quite pedestrian without really creating a context or sense of interest in these moves or, for that matter, in the practice of riding circuit, which Justices maintained for over a hundred years.

Justice O'Connor's weakness as a writer lies in her inability to give up telling and to really allow the judges to speak for themselves while showing us who they were, or are. She frequently tells the reader that a particular case or Justice was “interesting” without making him (for they are mostly hims until Justice O'Connor herself became the first woman Justice) interesting or human or showing how decisions they wrote altered the course of history. In her writing, too, she is prone to use the phrase “of course” without providing the course which made her point inevitable. Generally, there is no “of course.” Things happen for a reason and are moved along by events and individuals. Good history writing charts the course ideas and events take, making them stand or fall through the events and people themselves. When the book occasionaly comes to life, it does so with the help of the colorful judges she chooses to profile. Justice Iredell's letters to his wife detail the rigors of being on circuit. The story of Justice Douglas leaving a decision as a note on a rock demonstrates both his idiosyncracy and his curmudgeonlyness.

Her discussion of humor on the bench falls flat because the few amusing moments that occur either require a much better narrator than Justice O'Connor or count as one of those “you had to have been there” moments that defy the telling of them. When she tells stories or allows the words of the Justices to speak for themselves, her narrative picks up some steam. The book is stronger when it relies on anecdotes and personalities than when it discusses principles or practices. Material about the various oaths Justices have taken on being sworn in through the Court's history, fall flat because they have no relevence to how the individuals behaved as judges. On the other hand, the section on dialogue between Justices and the great advocates who appeared before them could be expanded and enriched hugely, perhaps to the point of seeking to explain Justice Thomas's silence from the bench or Justice Scalia's needy bombast.

The chapter on resignation and retirement, although containing some interesting and touching stories about Oliver Wendell Holmes, Jr. and William O. Douglas' overstaying their intellectual capacity soon devolves into another list. O'Connor peaked my interest by mentioning the Slaughter House cases, but never explains them at all, leaving quickly for another list. Remarking that allowing retired Justices to sit on lower courts once they achieve senior status was “particularly interesting,” she fails to make either Stanley Reed or Harold Burton into interesting figues, while she mentions their names. The book is filled with many such missed opportunities in its desire to be comprehensive. Again, O'Connor writes, “Each court has its own customs and ways of operating. And I have had the opportunity to meet so many interesting people from all walks of life along the way.” Where are they? An anecdote from Justice Thurgood Marshall regarding a capital case involving a black man in the murder of a white woman and her white maid is, perhaps, the most affecting moment in the entire book, mostly because O'Connor has an arresting story to recount and allows Marshall to be the central character in telling it. 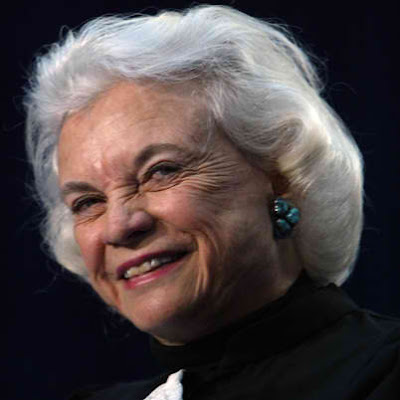 Out of Order: Stories of the History of the Supreme Court by Sandra Day O'Connor, the first woman to serve as an Associate Justice of the Supreme Court (Random House, 2013, 256 pages) is easily readable but pretty light stuff for any reader with a strong interest in the workings of the Court. It contains the text of the Declaration of Independence and the U.S. Constitution, largely as padding, as well as notes and an index. The book is not very ambitious and achieves this lack of scope and interest. I received the book in galley format from the publisher through Edelweiss.com.
Posted by Ted Lehmann at 10:39 AM