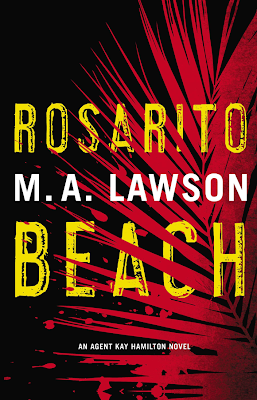 Rosarito Beach by M.A. Lawson (Penguin: Blue Rider Press, 2013, 352 pages, $26.95) is an interesting and problematic novel. M.A. Lawson is a pseudonym for Mike Lawson, author of the well regarded nine volume Joe Demarco series, and is the first in a projected Kay Hamilton series. Although written from a third person perspective, this book purports to present Kay Hamilton from her own point of view, with a male writer interpreting it. The selection of the pseudonym M.A. seems to be a thinly veiled effort to suggst a woman writer, perhaps named Mary Ann, as the author, in order to give it added legitimacy. In this, despite some other very good plot elements, Lawson fails to convince. Kay Hamilton, the beautiful, sexy, smart, ambitious supervisor in the San Diego DEA (Drug Enforcement Administration) office is an action oriented, take no prisoners person who does not suffer fools gladly, who would often rather act than think, and who seems to go out of her way to alienate her co-workers and subordinates. She struck me as a male agent with the wrong plumbing. Until the daughter she had given up for adoption at birth fifteen years before shows up in need of a place to stay....

Kay Hamilton has risen to her current status in the DEA because of a successful under-cover (double entendre intended) operation whose ending required a change of venue as well as a promotion for her. Now in San Diego, she is dedicated to bringing down the American branch of the Olivera drug cartel located in Mexico. Early in the narrative, she engineers the arrest of Tito Olivera, the younger brother of drug lord Cesar Olivero, whose power and influence have helped corrupt almost the entire Mexican political, judicial, and enforcement branches of government. The elder Olivera has become a worldly and skilled political figure, overlaying his essentially brutal self. There follows an exciting and disastrous set-piece as Tito is transported to a safe confinement at Camp Pendleton, necessitating a plot to break him out before his sure conviction in federal court. Just as all this is being set up, Kay's long lost daughter,Jessica, whom she has hardly ever given a thought to before, appears, prepared to stay. Kay has no idea how to be a mother, nor any interest in being one. The story moves on from there with Jessica being kidnapped and held for ransom in Mexico, as Kay discovers her maternal instinct, long dormant, now awakened.

Most characters in this sometimes exciting thriller conform to common stereotypes for gender, ethnicity, role, and so-on. There's nothing much surprising in their responses to situations or their approaches to life. I was interested that Lawson has Kay Hamilton thinking about her casual sexual encounters with a married lawyer friend as “playing” together, something like kids in a sandbox, with always satisfactory orgasms. This struck me as the way a man might want a desirable woman to think about sexual activity, but maybe not in congruence with the way many women actually think. This led me to ask why a previously published male writer, whose previous successful series features the male investigator for the Speaker of the House of Representatives, to write in the guise of a woman using a female central character for, perhaps, woman readers. The web site Marketing Charts.com posted some results of a poll of readers recently. The results indicated that female readers in the 18 – 33 demographic as well as among older women read more than men do, and by a margin of 57% to 39% enjoy mystery/thriller/crime books. Men prefer science fiction, literature, and graphic novels (comics). Older readers prefer the mystery/thriller/crime genre to an even greater extent than do younger ones. While there have long been successful woman writers writing about both men and woman detectives (Agatha Christie, P.D. James, Sue Grafton), I've become increasingly aware that many of the first novels I'm reading lately are by women, and many of them are about women solving crimes. I'm not particularly aware of successful efforts of male writers to feature women detectives as protagonists. So two questions arise: is Lawson making a cynical play to capture woman readers, and is this a successful effort to do so? 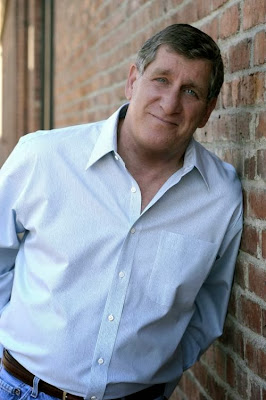 Mike Lawson says he “was raised in Pueblo, Colorado with a passel of brothers and one sister, then attended college at Seattle University and got a degree in engineering. After college, I went to work for the U.S. Navy as a nuclear engineer and spent about thirty years working for the Navy’s nuclear power program. I spent some time in Washington D.C., but most of my career was at a large naval shipyard in Bremerton, Washington. At the shipyard I managed a number of different organizations related to overhauling nuclear powered submarines, cruisers, and aircraft carriers. I ended my career as a member of the government’s Senior Executive Service and as the top civilian at the shipyard responsible for navy reactor plant work on the West Coast. The influence of my former career on my writing is discussed briefly in the “Behind the Books” section of [his] website. Regarding my personal life, let’s just leave at: I’m married, live in the Pacific Northwest, and when I’m not writing I mostly play golf and just goof around.”

Rosarito Beach (An Agent KayHamilton Novel) by M.A. Lawson (Penguin: Blue Rider Press, December 2013, 352 pages, $26.95) is the first in a projected series with DEA agent Kay Hamilton as the protagonist. Written by M.A. Lawson, a pseudonym for successful crime novelist Mike Lawson, it's a somewhat predictable drug cartel tale set in the environs of San Diego and nearby northern Mexico. There are plenty of plot twists to help the reader maintain interest, and Agent Hamilton shows some growth through her experiences, but there's no telling where Lawson will take the story of a career mother whose new-found domestic responsibilities may jeopardize both her sex life and her career. Rosarito Beach was provided to me as an electronic galley by the publisher through Edelweiss. I read it on my Kindle.
Posted by Ted Lehmann at 9:00 AM