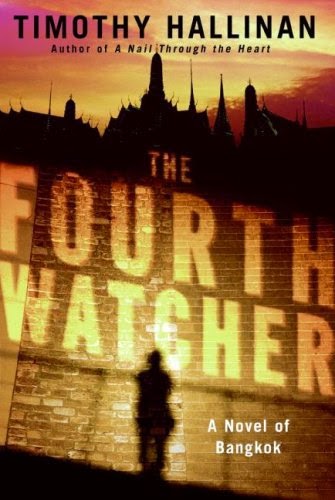 In The Fourth Watcher: Poke RaffertyThriller #2 (Harper Collins, 2009, 324 pages, $7.99) author Timothy Hallinan takes the Bangkok based travel writer, problem solver, family man, and seeker of adrenaline rushes another step deeper into life in his chosen home of Bangkok, while opening wider and wider cracks into the story of what makes him tick. Again, Hallinan creates the steamy environment of this tropical city, always on the verge of a tropical downpour and super-saturated with an atmosphere just about ready to let loose. The weather stands as a metaphor for the overheated political, social, sexual environment of what can arguably be called the sex-tourism capital of the world. It's an appropriate place for Poke to have settled, as his metier is tourism from the seamy side. Poke is practicing evasion tactics, trying to recognize and escape being followed by a team, which his friend Arnold Prettyman, a retired spy, has assembled to help train him. Thinking he has identified and shaken the followers, Poke comes up against a beautiful Chinese woman who shoots him in the face, with a dissolving pellet and disappears.

Poke has been carrying a ring around in his pocket, struggling to work up enough courage to ask, once again, for his lover and companion Rose to marry him. Rose, an unspeakably and believably beautiful woman, has been with Poke since he liberated, rescued, freed, you-name-it her from her previous job as a nude dancer and prostitute in the sex district of Bangkok. She now runs a domestic cleaning service with her friend Pansy. Together they have adopted a Thai street child named Miaow, at once fragile, resourceful, damaged, and brilliant. Rose has just accepted Poke's proposal, when the police arrive at the door to arrest her for distributing counterfeit Thai and U.S. currency, and the story is on. Hallinan is one of the best in the business at creating cliff hanger chapter endings, making it nearly impossible to unwrap oneself from one of his books before reaching the end. The ability to create and direct dramatic tension to just below the unbearable point is a great skill, which Hallinan possesses in gobs.

Writing a series of novels gives a writer an enlarged window in which to fill in the details and nuances of the heroes back-story. In his Travis McGee novels, John D. McDonald never really did this. Although there were continuing characters and occasional references to incidents in past books, McDonald made no real effort to disclose formative events in McGee's life. I would say this was true with the Spenser novels of Robert B. Parker, too. On the other hand, in James Lee Burke's Dave Roubichaux stories, the character develops, ages, and changes through the years. In The Fourth Watcher, we meet Poke's father and his Chinese half sister, which reveals more of the motivation for his disdain for his own background as well as his need to gather, cherish, and grow a family composed of damaged birds. This opportunity to look into the genesis of a character works very well for me, as Poke becomes more complex and interesting.

In TheFourth Watcher Hallinan introduces Frank, Poke's estranged father who had left Poke's mother many years before to return to China, as well as a beautiful and skilled half sister he never before knew existed. The plot revolves around counterfeiting orchestrated by Korea and Frank's efforts to escape the clutches of a vicious Chinese overlord. Meanwhile, the domestic issues confronting Poke continue to develop, as does his friendship and guarded partnership with the English educated, Thai policeman, Arthit. All told this is an absorbing and hard-driving thriller that, from time to time, forced me to set it aside to allow my own excitement to be reduced. That's always a good signal for me. 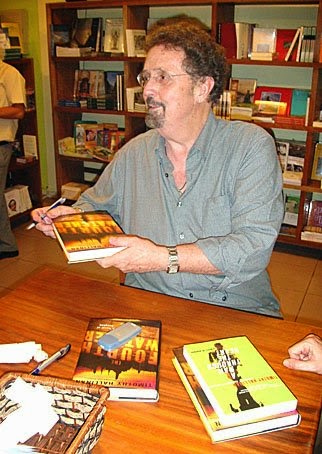 Tim Hallinan is one of the most accessible of writers. He lives an active social media life on FaceBook and can be contacted through that or through the contact page on his web site. He responds to good questions with thoughtful answers that truly contribute to a reader's sense of contact with the characters in his books and with him. His web site also contains a section called Finish Your Novel, providing a wonderful resource for aspiring writers about the writing process and how he's developed his own skills. He's thoughtful, articulate, and generous in his approach to mentoring other writers and sharing his own experience.

The Fourth Watcher: Poke Rafferty Thriller #2 ( Harper Collins, 2009, 324 pages, $7.99) presents high tension and adventure while advancing the experiences and character of the Poke Rafferty character. I recommend it wholeheartedly to readers wishing to fill in their experience with Poke. I also am finding it quite gratifying to read through the stories chronologically, although that's not necessary. I bought the book used through Thrift Books, which I find to be a useful place to purchase print books these days, when I don't want to pay Amazon prices. I recommend all of Hallinan's books I've read so far and am looking forward to more.
Posted by Ted Lehmann at 6:09 PM