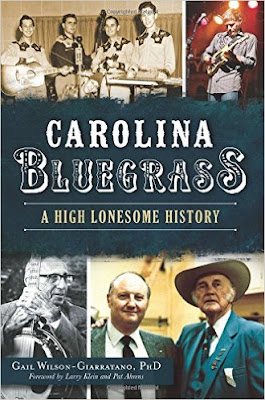 Carolina Bluegrass: A High Lonesome History by Gail Wilson-Giarratano, PhD (The History Press, 2015, 176 pages, $21.99/9.99) is a profusely illustrated overview of the role bluegrass music has played in the Carolinas. Author Gail Wilson-Giarratano has condensed much of the history of bluegrass music into a brief consideration and then sought to interview many of those involved in making and writing about the region's music today. The book is ambitious in its goals, yet limited in its scope, making it difficult to function as both good history and an effort to capture the role bluegrass plays in the contemporary world of Carolina music. On it's web site, The History Press describes itself as “empowering history and culture enthusiasts to write local stories for local audiences, we create exceptional books that are relevant on a local and personal level, enrich lives, and bring readers closer – to their community, their neighbors, and their past. We are committed to the pursuit of new growth opportunities and to increasing the availability, depth, and breadth of local books. Driven by genuine pride in our work and an infectious enthusiasm for what we do, we are universally dedicated to the success of our authors, employees, and stakeholders.” This title fits well into that description, but as such, seems to lose focus as a useful book for those interested in placing bluegrass into a richer and more comprehensive context. The book is best read by those who contributed to it or are written about in it, but not particularly useful for people actually wishing to learn about bluegrass in a larger world of national or regional music.

The strongest elements of Carolina Bluegrass are the interviews and profiles of people who are, or recently have been, involved at many levels in the creation and presentation of music in the two states. Some of the people profiled are major contemporary artists and personalities. Wayne Benson and Kristen Scott Benson are effectively profiled as are Cindy and Terry Baucom. Earl Scruggs gets his due, but the Earl Scruggs Center in Shelby, NC, an important center for information about Scruggs and the region, doesn't. Wilson-Giarratano is effective in identifying and providing brief profiles of musicians who function in local radio, performing and even recording situations. She spends significant time visiting several of the small, and endangered by internet commerce, music shops, many of which host much loved and long-lived local jams. She also spends time discussing local country radio stations which devote some time to bluegrass, many of which have had their lives extended through streaming internet. In doing this, the book provides a real service. Whether people from outside the region will seek out these shops and jams is another question. The focus seems to be on making sure to mention lots of names. The book could function effectively for bluegrass fans seeking to find local music during their travels in the Carolinas.

The book focuses on people who have distinguished themselves enough in the Carolinas to become recipients of cultural history awards presented by state legislatures. The winners of the South Carolina Jean Laney Harris Folk Heritage Award are all mentioned, and many are profiled as are those who have won the North Carolina Heritage Award. These state awards draw attention to local cultural history. 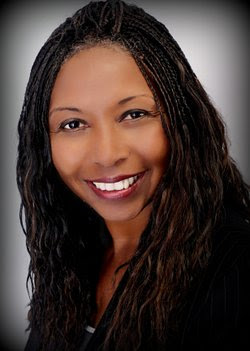 Author, Dr. Gail Wilson–Giarratano, (a native of Lancaster, SC) joined City Year Columbia on March 26, 2012. She was the President and CEO of Girls Inc. of the Greater Capital Region in Albany, NY. She has a B.A. in Education from Winthrop College, a M.S. in Early Childhood Education: Leadership & Policy from Wheelock College and a PH.D. in Applied Management & Decision Sciences. Gail is a member of Alpha Kappa Alpha Sorority, Inc. She has a vast experience in teaching, child welfare, research, public policy, and mental health. She is thrilled to return to her home state and make strides in reducing her state’s dropout rate. Gail is committed to supporting City Year’s mission to be an education-focused nonprofit that partners with public schools to help keep students in school and on track to graduate. She has also written Drink Small: the Life and Music of South Carolina's Blues Doctor from the same publisher. (Source: mostly City Year web site.

Gail Wilson-Giarratano, PhD, author of Carolina Bluegrass: A High Lonesome History (The History Press, 2015, 176 pages, $21.99/9.99) has produced a lively, but narrowly useful overview of the history and current state of bluegrass in the two state region. For people from North and (particularly) South Carolina, Carolina Bluegrass can function as a useful resource for information and sources to hear bluegrass in the two states. For visitors eager to experience bluegrass music as a local phenomenon, it can serve the same purpose. For those seeking deeper and more nuanced views of the origins, nature, and issues within the bluegrass world, it is probably less useful, but could provide a starting point. Meanwhile, people living within the region may eagerly purchase the book to see if their name is included. I received a copy of the book from the author in return for a written response to her queries.