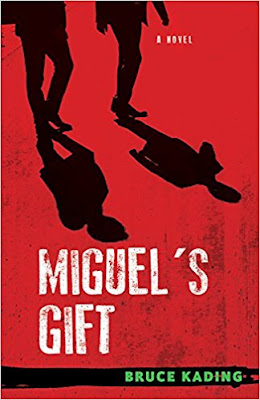 Set in the shadowy world of illegal immigration in Chicago, Miguel's Gift by Bruce Kading (Academy Chicago Publishers, 2017, 276 pages, $10.39, $9.87) tells the story of agent Nicholas Hayden's joining the INS, his probationary, year, and the progress of his career, beginning in 1987, spends nearly the first third of the book in a listless narrative, without seeming character development or real action of any kind. The book opens with a 1974 prologue resulting in the death of agent Tom Kelso. Hayden, unusually well educated for a novice INS agent, is, for some reason burrowing into the INS for undisclosed reasons. Descriptions of “wets,” undocumented aliens from Mexico and the rest of Latin America, who seem to dominate the world of tortilla factories and pork slaughter houses is unpleasant, and cold sounding. As the book is introduced, it's difficult to tell what direction the story might take.

Slowly the story of Frank Kelso emerges as Hayden, now deeply buried in the day-to-day business of an INS investigator, becomes what his mentor had described as a “gladiator” only four years before. When, at a retirement bash, the Kelso story arises, Hayden is reminded why he joined the INS and buried himself within it bureaucracy. At this point, about 40% into the book, there still has not been any writing that would take the story above pedestrian narrative, nor hint at the direction or perspective the author wishes to assume. Hayden has broken the law in order to obtain an unwarranted conviction and deportation, while rationalizing it all to himself and seemingly losing track of his, so far, hidden motives for joining in the first place. The story emerges as an exploration of the problem of illegal immigration and casual official enforcement which can never halt the progress of illegal immigration.

However, as Nicholas Hayden progresses in his career in the INS, he becomes an investigator and as such, is involved the recruitment of an informant, who he begins to know on a personal basis. As both case and the relationship develop, the reader sees the role of working in the INS as being more nuanced and the problems of working in an entrenched bureaucracy increasingly complex. Senior agents have almost all advanced from early experiences along the border, and many come from the Southwest. They tend to believe that such experiences are necessary for an agent to be effective. College educated agents, like Hayden, are not an asset. Careerism is rampant, with older agents either ambitious for promotion or merely doing their time until retirement at age fifty-seven. The environment is poisoned with racism, cynicism, ant outright laziness. Meanwhile, Hayden has an issue of his own. And the illegal immigrants begin to take on a human face for both good and evil. The plot, built on Hayden's search for evidence about dissolution of his father's career becomes secondary to gaining an understanding of life inside this difficult and broken bureaucracy. 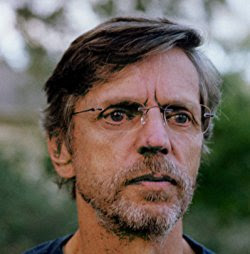 After graduating from the University of Oklahoma, Bruce Kading began a twenty-six year career in federal law enforcement that included twenty-two years as a Special Agent with INS (Immigration and Naturalization Service), four years as a Special Agent with the EPA (Environmental Protection Agency) and a brief stint with the FBI (Federal Bureau of Investigation). Much of his career with INS was devoted to targeting criminals who trafficked in counterfeit immigration documents, birth certificates, and other identity documents. While assigned to the Chicago and San Francisco field offices, he received several awards and commendations for leading undercover investigations into criminal organizations involved in counterfeiting activities. For four years he was assigned to the OCDETF (Organized Crime Drug Enforcement Task Force) in Chicago, working closely with agents of other federal and local law enforcement agencies, including DEA, FBI, and the Illinois State Police. On numerous occasions Kading went “undercover” to purchase narcotics from drug dealers, many of whom were undocumented aliens involved in counterfeiting activities. When he retired, Kading was Chief of the Fraud Investigations Branch at the Chicago office.

After retiring from law enforcement, Kading became a licensed private investigator and a freelance writer, his articles appearing in numerous publications, including the Chicago Tribune and the Taos News. He received the E.H. Shaffer Award for Investigative Reporting from the New Mexico Press Association for a series of articles about the problem of DUI in New Mexico.

Kading continues writing and lives in St. Augustine, Florida with his wife, Lucy. (from profile on Amazon)


Miguel's Gift by Bruce Kading (Academy Chicago Publishers, 2017, 276 pages, $10.39, $9.87) is a police procedural with something of a twist. It seeks to follow an investigation into providing illegal documentation distributed to Mexican and other Latin American immigrants in Chicago. The action follows Nick Hayden as he joins the Immigration and Naturalization Service and moves through the ranks over a period of a few years before being assigned to a investigative unit, all the time secretly seeking information about his father's failure a generation earlier in the Service. Kading's narrative relies too heavily on exposition rather than revealing character through action and dialogue. Therefore, it lacks the narrative drive and engagement that many more experienced writers provide. The book seems to be as much an exploration of Kading's own life working within a tired, overburdened, and too challenged bureaucracy, thus leading the reader too much toward his own problems encountered in a long career with the INS. I finished the novel more to find out how the writer resolved his own problems than for the resolution of the mystery. I received the book as a pre-publication digital edition from the publisher through Edelweiss and read it on my Kindle App
Posted by Ted Lehmann at 9:00 AM