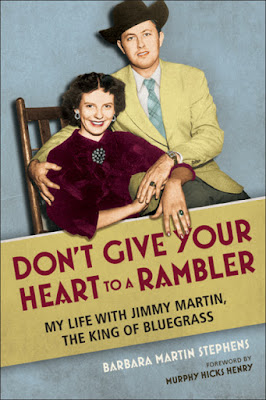 Don't Give Your Heart to a Rambler: My Life with Jimmy Martin, the King of Bluegrass (Music in American Life by Barbara Martin Stephens (University of Illinois Press, 2017, 240 pages, $19.93/17.96) is a tell-all memoir written in a chatty style by Martin's common-law wife of fourteen years. I've often yearned for tell-all books about bluegrass greats. Stephens has written one, driving me from at first wishing she hadn't to a deeper appreciation of the life and culture that contributed to Jimmy Martin's well-deserved reputation for womanizing, violence, and cheapness. While the book is as much about Stephens herself as it is about Martin, and should be read with a critical eye toward to high probability that it's designed to shed a positive light on the author, it will nevertheless stand as a useful first person account of Martin's difficulties and devils as well as the liveliness and vigor he brought to the early days of bluegrass music.

Barbara Stephens was born in 1935 in Memphis, TN, where her parents owned a mattress factory located in the back lot of their home. Her grandparents owned a mattress factory in Nashville. She was brought up in relative comfort for the time when many fewer women were encouraged to get an education, beginning to work early in life even to the extent of opening a lemonade stand to sell “soft drinks to employees.” She was lovingly overindulged, while still learning many of the business skills and work ethic to which she attributes her later success as Martin's manager and as a booking agent for a number of bluegrass and country artists.
While working as a waitress in Nashville, Barbara met Bessie Lee Mauldin, Bill Monroe's girl friend, and through her the side men in Monroe's band, including Martin. At that time, Monroe was well established as a major star of the Grand Ole Opry. She first met Jimmy Martin as a customer in the restaurant where she worked, and he commenced to pursue her almost immediately, although it took a while for them to consummate the relationship. The chatty style, loaded with names and events, is never quite in a straight line, but always leads, inevitably, to Martin's lack of taste, coarse behavior, heaving drinking, battering, and womanizing. Stephens appears to have been both attracted and repelled by the combination, but, in the end, finds Martin to be fatally attractive.

Jimmy Martin, seven years older than Barbara, was born in the East Tennessee town of Sneedville, a small town of roughly 1300 people lying just south of the Virginia border. The town is isolated in an area with few roads and what appear to be a line of rugged hills running from northeast to southwest, the geographical and cultural heart of Appalachia. Seldom have two such culturally separated people met and built a career together. Martin's education did not, apparently, extend beyond grammar school, and he could barely write his name until Barbara taught him how.

Despite Martin's lack of formal education, Stephens often asserts his intelligence and savvy, however untrained. In contrast, his partner was quick with numbers, gregarious, pretty...and young. She was always able to find work from waiting table to office work where she was a keypunch operator who later became computer literate. Martin, however, always kept a tight chain on the money and her relationships. He kept her from having access to money, was viciously possessive, and controlling, using physical violence to exert and maintain control. Nevertheless, Barbara frequently holds that there were good times, and defends her love for him, always coming back after she had left until she left for the last time, as Martin's behavior continued to deteriorate.

Perhaps in defense as well as to express her own independence and capability, Barbara began to book Jimmy Martin as well as a series of other bluegrass and country artists while bearing four children that were their own. Martin seems to have had a not completely accounted for number of children with other women. Meanwhile, Barbara engaged in several affairs herself, including a long-term relationship with Bobby Osborne. She also provides extensive detail about why the greatest failure in Jimmy Martin's life, not ever being asked to become a member of the Grand Ole Opry, was the result of flaws in his own character unacceptable to Opry management, and, more specifically, a vendetta against him by Bill Monroe. The book contains significant detail about the law suits over Martin's estate after his death in 2005. 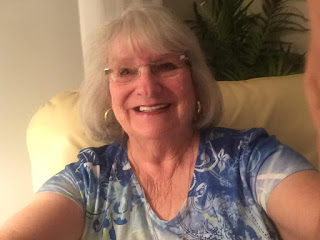 The Foreward to Don't Give Your Heart to a Stranger, written by Murphy Hicks Henry, the author of the signature book on women in bluegrass, Pretty Good for a Girl, comments on the bravery it took to write a book that reveals “the feet of clay” Jimmy Martin surely possessed. But, in addition to brave, Barbara Martin Stephens shows herself to be a more than a survivor. She uses the adversities in her life and her own native intelligence to forge a life for herself, first as a booking agent for Martin and many other performers, and later in life as a para-legal in Florida as well as to enter into a long and successful marriage. She never loses her love for pretty clothes, showy cars, lovely homes, good friends, and plenty of laughter. She always maintains those qualities the small minded and vindictive Martin tried unsuccessfully to extinguish.


In Don't Give Your Heart to a Rambler: My Life with Jimmy Martin, the King of Bluegrass, (University of Illinois Press, 2017, 240 pages, $19.93/17.96) Barbara Martin Stephens has written a sometimes harsh portrait of her long-term “marriage” to Jimmy Martin, during which she endured significant pain and suffering at his hand. The book also sheds light on the lives of women in America generally, and in Tennessee particularly, during the 1950's and 60's. Her style is chatty, emphasizing many of the people she met and places she went. Nevertheless, she forged a successful and happy life, while regaining contact with her family after Martin's death. The book stands as a testament to survival, the will to persist, and the importance of choices in forging a life. I was provided the book by the publisher through Net Galley. I read it on my Kindle app.

Please remember that every link on this blog points to a book you can order directly from Amazon. com. Using links in my blog pay me a small commission which contributes to keeping the blog going. Thanks.
Posted by Ted Lehmann at 3:29 PM