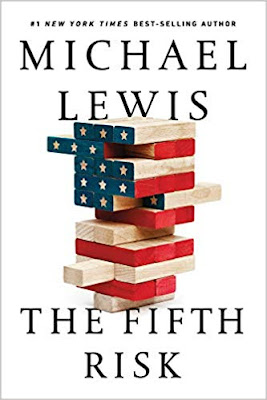 Fifth Risk by Michael Lewis (W.W. Norton, October 2018, 221 pg., $26.95, $10.58) shows in example after example how willfully ignorant Trump employees in Federal agencies were and are, as well as how much hard work and knowledgeability are required to do a good job within the federal bureaucracy. Lewis introduces the reader to a cast of dedicated professionals who provide necessary information and services to keep America running chosen from three million governments employs and with whom President Donald J. Trump has been at war since his inauguration.

Lewis is a story-teller who takes on interesting topics, spinning stories around them as his highly readable, informative narrative style draws the reader in, eventually capturing completely. He begins by showing us how unprepared and incurious the Trump minions were before introducing us to John MacWilliams, the first risk assessment officer of the Department of Energy. MacWilliams had prepared notebooks full of explanatory data and information about the job of DOE and the risks it oversaw, only to spend a few minutes with, of all people, the clueless Rick Perry, the former governor of Texas, who inhabits the position.


Throughout the vast and dedicated bureaucracy, government civil service employees, upon learning that Donald J. Trump had somehow been elected President,  swung into action. They prepared voluminous briefing books to prepare members of the new administration to understand and continue doing the jobs that provided crucial information and services to the American people. They expected to be swarmed with these appointees the day after the election….And no one came! When a few new agency heads showed up, they demonstrated a remarkable lack of curiosity about what their jobs entailed. Eighty-nine year old Wilbur Ross thought the Department of Commerce was devoted to business and could never grasp the breadth of services and information it provided. Curiosity and skill were absent. And so information essential to meeting the needs of every day Americans, particulalarly in the rural areas that won the election for Mr. Trump, were hollowed out...neutered and made totally ineffective by a President not interested in governing.


The advantage of Lewis’ style of story-telling lies in his ability to take a general principle of which we’re all aware, in this case the two facts that Trump is sending unqualified hacks to lead the major divisions of the government and that the agencies are being hollowed out, denied money and qualified staff becomes real in his hand. We see directly through the eyes of dedicated employees the importance of many functions we’re not aware exist protect and inform, as well as how cutting off the top and denying funding hollow out the agencies, denying the recipients of their services essential protections and advice that agencies provide. By focusing on the Department of Agriculture and the Department of Energy, Lewis shows the breadth of their portfolio and the importance of the high quality people working for them. Replacing what Trump has so successfully destroyed, with the canny help of one of America’s most underrated disablers, Mick Mulvaney, will take a generation or more to rebuild once we rid ourselves of their depredations.


The replacement of food scientist Dr. Cathie Wotecki with right wing political hack and talk show host Sam Clovis represents another example of removing expertise from important, but often quietly effective low-profile specialists with political people seeking to achieve political goals. The achievements of Wotecki during her time with FDA at the Department of Agriculture were monumental, and life saving. Clovis job was to shut down programs and eliminate the words “climate change” from government lexicon.


The role of government in rural America hidden, by being administered through small banks, brings expertise and money into places where neither exists, while being hidden by local interests and their antipathy to what they see as “the government.” Lillian Salerno eventually ran for Congress as a Democrat as she became increasingly aware of the Trump strategy of replacing professionals with political appointees who had no expertise or interest in the areas where her specialization had helped strengthen rural areas. Simply a small example of the larger problem. She lost!


Instead of re-visiting the depredations committed daily on the American people, the Tweeting, whining, self-promoting course of the Trump train wreck, Lewis takes the time to burrow into the inner workings of the crucial agencies and programs operated by the lower level political appointees and civil servants who make the wheels turn. Often, the recipients of government services don’t even know these services are sponsored and paid for by the government. Lewis shows how commitment, expertise, hard work, and dedication have built a system that actually delivers necessary services, improves the national health, protects the environment, and places needed checks on the damage often perpetrated by big money and large corporate interests. The results are a hollowing out of the inner workings of the government, hidden by bluster and mis-direction from the top. There’s no little irony in Lewis’s ending the book with the story of a tornado chaser, who has learned to follow behind storms to avoid being killed by the object of his studies. 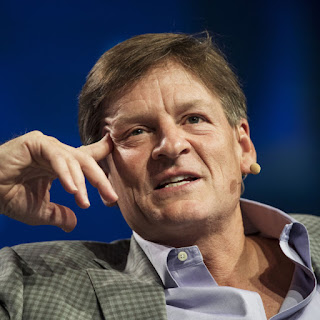 Michael Lewis is the author of a series of best-selling books mostly having, at least superficially, to do with sports and/or business (Liar’s Poker, Moneyball, Blindside, The Big Short) which have all been best sellers as illuminating changing aspects of our culture through his wonderful storytelling. Originally from New Orleans, and educated at Princeton and The London School of Economics, Lewis’ is 58 years old, and with Fifth Risk at the top of his game.


In the beginning of Fith Risk by Michael Lewis (W.W. Norton, October 2018, 221 pg., $26.95, $10.58), Lewis chats at length with John Macwilliams, who has identified the five risks facing the government as the Trump administration sets and achieves its chaotic agenda. MacWilliams has identified four risks for Lewis, who finally asks him what the fifth risk is, to which MacWilliams responds, perhaps in a toneless, hopeless voice, “Project management.” This book is highly entertaining as well as “Must Reading!”