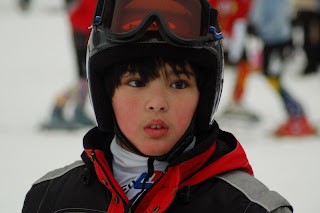 One of the nice things about grand parenting is that there’s no need to teach or be critical. It’s not that I haven’t been those things and probably will continue to do so from time to time. It’s just that such behavior isn’t in the grandparent job description. Honesty requires me to admit that I have often exceeded the mandates of my job description. 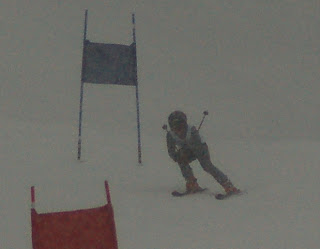 This having been said, we awoke this morning to a cold gray day with little promise of improvement. Be we had put on ski clothes pulled from the closet and headed to nearby , where grandsons Alex (11) and Peter (9) were going to participate in their first ski race of the season. Alex is entering his third year of racing and, as very much a pre-adolescent, approaches this year’s racing, where he has moved up a category and thus has few expectations, with the cool confidence that only his age can muster. Peter is headed for his first ever race with some apprehension. 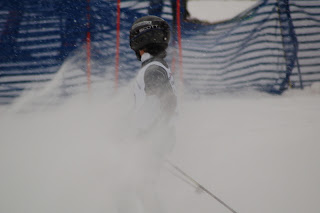 have progressed to levels un-imagined in our misspent youths. There are no sandlots here, no pickup games or races, no informal, “Bet I can beat you to the bottom of the hill.” A couple of hundred kids in five or six age groups have assembled on this mountain for a day of giant slalom races. Adults have been up on the mountain setting gates. Electronic timers are in place. There are gate watchers, timers, starters, a finish lane, and, as always in kid sports, parents galore. Grammy Irene and I are bundled up but still chilly at the bottom of the hill. The temperature is about 27 degrees and the snow making machines 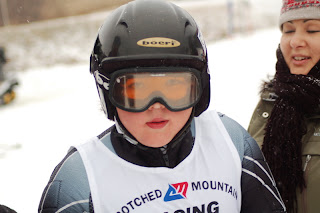 have been running all night. A nice cover of packed powder snow has been deposited where little or no cover existed a few days ago. Winter has finally arrived.

The first racer comes down the hill. She’s a tiny little girl, the only girl in her class, who zips through the gates like a bat out of hell and skids to a stop to the cheers of her parents and the ringing of the inevitable cow bell. Another skier crosses the line about every thirty to forty seconds for the next hour. Finally, Peter’s number is called and we peer up the hill through the beginnings of a light snow storm to see him begin his tentative run down the hill. He carefully picks his way through the gates, gaining confidence as he descends. For a first run, his time is acceptable and he has made it through all the gates and kept on his feet. Peter, parents, and grandparents are pretty 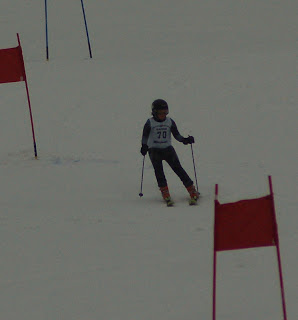 tickled as we head for the lodge to stoke him up for his second run.

Forty-five minutes later, it’s snowing much harder and Alex’s name is called. Apparently he bobbles a little at the start and then comes down through the gates with speed and confidence. The improvement he shows over the race we observed last spring is significant. He keeps his skis pointed through the best lines, maintains his crouch and finishes in a cloud of light snow. The bobbles at the top cost him a few seconds, but he has opened his season competently and will surely improve as the season progresses.

Cold and happy, the grandparents head for the warmth of their car and home before the snow gets too deep. We arrive home to discover that a car has knocked over a pole and we have no power. We might as well have stayed on the hill if we were going to be cold anyway. 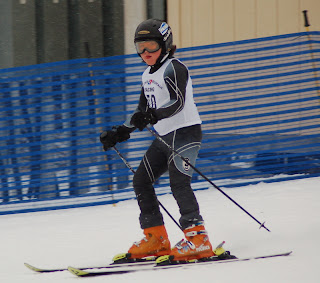