The e-mail showed up on my screen. The subject line read “I’m inclined to try this.” In the text was, “But I may need some help deboning, etc, on Sunday.” And this link: http://www.blacktable.com/turducken031217.htm. Our son Rick had had a brainstorm, trying a difficult assembly recipe he had never attempted, or for that matter tasted, for Christmas dinner. I fired back an e-mail saying I thought this particular job was above my pay grade and we would be at his brother’s house for a good part of the day. Back came an e-mail, which I read as capitulation. But no, he responded he had already bought the turkey, the duck, and the chicken and plans were coming along just fine.

Turducken has become a fashionable alternative holiday meal, perhaps because it is fancy and something new. The name comes from the fowl built into the basic package – a chicken inside a duck inside a turkey served with three different stuffings featuring exotic flavors like andouille sausage and smoked oysters. Building this bird(s) is a two or three day affair requiring that all three of the main constituents be deboned, put together in layers and then sewn up, so that the final product looks just like a turkey. The surprise occurs when the chef cuts across the turkey and reveals a multi-layered piece of culinary beauty. Because the feast is multi layered and complex, it must cook slowly for ten to twelve hours and sit ou 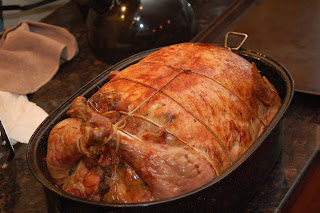 tside the oven for an hour before being plattered, carved, and served.

We arrived shortly before to the aroma of roasting bird, but it didn’t smell quite like turkey. Rather a complex, somewhat smoky smell permeated the air. We were permitted a look in the oven, where what looked like a rather fat turkey lay roasting away. We settled in for the long wait. The Internet is filled with links to the recipe as well as discussions of its importance and implications. Chef Paul Prudhomme has provided his recipe (http://www.chefpaul.com/turducken.html) which may be the original. The recipe, copyrighted in 1985, may be relatively new, but it harkens back to Roman feasts and Renaissance culinary art. Another recipe, with helpful pictures appears at http://www.thesalmons.org/lynn/turducken.html. In fact, a Google search for Turducken yielded 350,000 hits.

Around the Turducken came out of the oven for it’s finishing period, brown, aromatic, and bursting steam as the inner flavors permeated the meat encased in tough turkey skin. The rest – mashed and roast potatoes, green beans, gravy, a savory cranberry sauce – 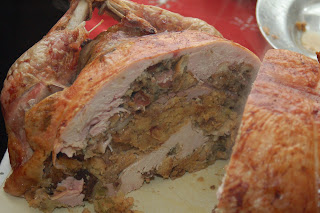 came together quickly and we sat down around four. Rick, wielding his favorite Sabbatier chef’s knife, took a sweeping cut across the middle of the Turducken revealing the inside in all its glory and looking like so many of the pictures we had seen. PERFECT! The flavor, SUBLIME! Well worth the effort.

A note of caution is worthwhile here. This delicacy may not be for everyone. Not all like duck. Andouille sausage is a bit exotic and strong tasting for some palates. Smoked oysters impart a distinctly smoky flavor and something of a low tide aftertaste to the entire experience. Rick and I are already considering substituting kielbasa for the sausage and fresh shrimp for the oysters next year. And, for sure, next year’s Christmas dinner will feature some sort of variation on Turducken. In case this isn’t challenging enough for you. Give the Stuffed Camel Feast (http://www.snopes.com/food/prepare/camel.asp) some thought.