I’ve written in this blog before about my concern for the future of bluegrass if the music doesn’t cater to changing tastes in the audience. Our kids grew up on various forms of rock music and seem almost completely impervious as they look at their aging parents and just shake their heads. When we go to bluegrass festivals we see many more people our age (mid-sixties) than we see young folks with their children. One promising movement has been the efforts of some bluegrass festivals (, Grey Fox, Jenny Brook, Springfest, and others) to provide a in some form or other where children get instruction in playing acoustic instruments and perform for the entire festival on the last day. These kinds of activities serve to relieve parents of having to supervise their children all day every day as well encouragi 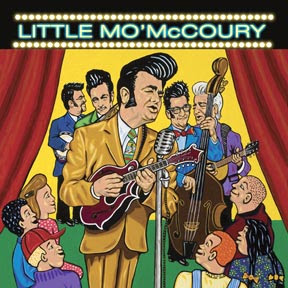 ng the kids to make music together and begin to get into bluegrass.

Ronnie McCoury seems to have come up with a different approach. On August 21st, “Little Mo’ McCoury,” a CD of children’s songs will be released. According to the Bluegrass Blog, this new album was inspired by the birth of Ronnie’s new child. The album contains sixteen cuts, divided between well known children’s songs bluegrassified and traditional bluegrass and folk songs appropriate for kids. You can listen to the samples here. A press release from McCoury Music says, “Ronnie McCoury's fondest childhood memories are ones he has of accompanying his father-the iconic Del McCoury-to bluegrass festivals, experiencing early on the way that music can bring parents and kids together. Now that he is a highly accomplished artist (and father) in his own right, Ronnie-joined by the Del McCoury Band, of which he is now a longtime and prominent member-has recorded an unprecedented album that will allow families everywhere to experience together this quintessential American musical form.”

Songs on the CD include: “This Land is Your Land,” “Teddy Bear’s Picnic,” “Jimmy Brown the Newsboy,” “Big Rock Candy Mountain,” and more. There’s a wide selection of songs from Bob Dylan, Randy Newman as well as McCoury originals and bluegrass classics. This album not only presents fine children’s music, but shows how such music can be interpreted within the bluegrass genre. Getting children started on music in the format of bluegrass and accessible to their tastes and interests should be a can’t miss project.

This all sounds like a great idea to me. As grandparents who wish to share the joy of listening to bluegrass music, attending festivals, and learning to play the music, we’ve tried to interest our sons in interesting their kids in the music to less than resounding enthusiasm, we welcome this release from McCoury. It’ll find its way under Christmas trees and onto our CD player when the grands are around. Little Mo’ McCoury will be released on August 21st. Keep your eye out for it.