Reading Fiasco has elicited a mixed reaction from me, but overall, my disgust (looking for a strong enough word without lapsing into distasteful) with the administration of the war in Iraq and in our own country has grown to almost unspeakable levels. At the same time, while the picture is somewhat more mixed, my admiration for our professional military has grown im 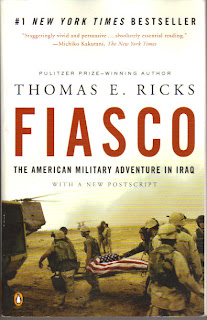 mensely. The picture Ricks paints is of a military that, while prone to enormous error and hubris, nevertheless takes self-criticism and analysis more seriously than almost any other segment of our society and then uses this analysis to improve the way it approaches solving the problems facing it. His account of Lessons Learned by the Army and Marine Corps both through on the ground reports, blogs, e-mails, and articles by serving soldiers and the official and semi-official research conducted by analysts within the services shows organizations oriented to seeking not to make the same mistakes twice while at the same time prone to fight the previous war and fall into earlier failed practices because of their native (small c) conservatism.

As in any well told story, Fiasco has its share of heroes, villains, and goats. The villains are generally people on the political side of the equation who trumped up a war using false pretenses and faulty rationales to eliminate a regime without giving any thought to how difficult the rebuilding job would be. As expected, the initial military enterprise was apparently successful, although the seeds it planted led inevitably, considering the administration’s lack of vision, to the morass we now find ourselves in. The people who emerge as most responsible are the usual suspects: Bush, Rumsfeld, Bremer, and Sanchez. They either failed to provide the planning and resources necessary for success or set examples of lack of respect and sloppy analysis which set an example for those down the chain of command.

The goats emerge as those people either taken in by the administration or so deeply immersed in their previous experiences that they could not see the reality on the ground for the ideology in their minds leading to great mistakes. The most prestigious of the goats, although in many ways a minor player in this narrative, is Colin Powel, who wasted his immense prestige and moral force when he went before the United Nations and gave a speech he only later learned was a lie. Another goat is General Raymond Odierno, commander of the 1st Infantry Division, whose heavy handed, aggressive handling of Iraqi people helped energize and strengthen the insurgency that developed and still devils us. His influence for error overcame any good that might have been accomplished by his unit’s capture of Saddam Hussein. Nevertheless, he shows the capacity to learn new approaches as indicated by his present position as General David Patreus’ chief deputy.

The heroes tend to be two types of people. First are the people who see most closely the daily effects of the war on themselves and the Iraqi people. These people are thoughtful non-commissioned officers and middle management young officers, often graduates of West Point. They bring insight and intelligence to their experience, learning from their mistakes and striving to make those up the chain of command aware of the realities of their daily existence. The other category of hero includes senior officers who served in Vietnam or the Gulf War and then went on to a range of command and staff positions while studying for advanced degrees at the nation’s best universities. These officers, including men like Generals Anthony Zinni and David Patreus, bring an academic expertise grounded in combat experience to their analysis. These people have become experts in the nature and practice of counter insurgency warfare and see ways to apply its principles in the current conflict. When given command in tactical areas, they succeed. When given higher responsibilities for the strategic conduct of the war, they eventually achieve a level of influence that affects the highest levels conducting the war. The largest remaining question is whether they have been given such responsibility too late to have the desired effect.

Through his use of precise details of both successes and failures in the field, Ricks makes clear what no other reporting I’ve read has. In example after example he demonstrates how political concerns negated effective military action or efforts to establish relations with the Iraqi people. Military officers, having learned in places like Kosovo, Bosnia, and Croatia how to interact with and influence an insurgency, were prohibited from doing exactly those things that would have worked toward stated US strategy in order to achieve short term tactical goals or tamp down growing disenchantment at home by seeming to be attacking the problem while actually losing ground that had been gained.

Ricks demonstrates that much of the failure we have encountered in Iraq is a direct result of the failure of leadership from the top of the chain of command. From daily encounters with ordinary Iraqis to the shame of Abu Ghraib, officials in both the civilian and military structure have closed their eyes to the truth, denied facts presented to them, covered their errors by shading the truth or lying directly to the people and to Congress, and refusing to undertake the sort of thoughtful analysis that might have led to a different outcome. At every stage from the run-up to the war until the present day, the inconvenient analyses of responsible people within the structure have been ignored. Many who spoke and wrote the truth have seen their careers fall in tatters around them or have left military and government service in disgust or disillusionment over their inability to be heard. Perhaps the most thoughtful and insightful analysis on these issues has come from middle management military personnel writing on web sites designed to assist fellow officers in adopting effective practices on the ground in the streets of Iraq. Until the appointment of Gen. David Patreus, no American commander has been a specialist in counterinsurgency. Now in charge in Iraq, his presence may provide too little too late. Recent indications are that the administration so fears his upcoming September 2007 report that they seek to blunt it behind the testimony of the secretaries of state and defense. What remains, in the end, is the sense that American policy of containment from 1991 – 2002 was succeeding quite adequately in keeping Iraq powerless and in place. Furthermore, the war in Iraq took our eyes off the ball, which was thrown by Osama bin Laden from Afghanistan and had nothing much to do with Iraq. We will pay for this error in judgment for generations.