Carl Hiaasen has the wonderful ability to tell a rip roaring, page turner of a story that makes readers laugh while at the same time urging them to think about an underlying issue. Basket Case provides a prime example of this Hiaasen quality. I couldn’t finish the last Hiaasen 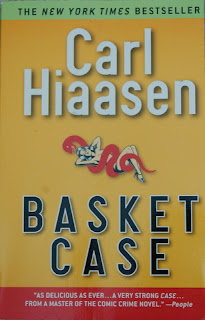 book I started (Lucky You, 1997), perhaps because it lacked verisimilitude or maybe even because I tried to read my next Hiaasen without leaving sufficient time between them. There’s a good reason writers put time between their books. When I discover a new, to me, author, I tend to want to devour their books. Sometimes this is effective for me, other times not. Anyway, having left this author alone for six months, I was really ready for Basket Case when I cracked it open.

Jack Tagger has been a newspaper man all his working life. After a promising start to his career, he has been relegated to the obituary pages as punishment for having spoken up at a stockholder’s meeting and embarrassed the publisher. His editor, the lovely but inexperienced Emma, is his nemesis as the book opens. Since having been sent to newspaper purgatory, Tagger has become obsessed with the age at which people die and obsessively dwells on their death age as he contemplates his own mortality. When he is assigned to write an obituary for deceased rocker Jimmy Stomarti, he embarks on an odyssey that may change his life and fortunes. The plot revolves around some lost Stomarti songs, a cast of unlikely characters on both sides of the fence, and Tagger’s efforts to make sense of his own disintegrating world. The plot draws the reader along quickly and enjoyably, providing a nice balance between suspense and laughs.

But Hiaasen is after bigger game than merely telling a story and here is where the skill of his writing becomes truly evident. He is a lifelong newspaper writer, having gone to work at the Miami Herald upon his graduation from college and still writing a regular column for that newspaper. Hiaasen’s books are all set in Florida, an environment with which he is intimately familiar and with which he continues a lifelong love-hate relationship. (You can find a selection of his columns here.) I just read a couple of his columns, which are filled with the sensibility that informs his novels as well as the anger underlying it. In the novels, Hiaasen uses unlikely situations and quirky characters to shed light on situations he addresses much more directly in the column format. Basket Case takes on the changes in the newspaper industry which have resulted in much diminished local coverage. The purchase of local papers by newspaper chains divorced from local and regional issues by distance and corporate greed have substantially diminished the ability of newspapers to do what they do best, keep local politicians and other officials honest by shedding light on their misdeeds. He also takes on the music publishing business and funeral homes while he’s at it. In another novel (Double Whammy, 1987) he satirizes television fishing shows, televangelists, and the hypocrisy of the South Florida developers. That’s a lot of hypocrisy to challenge in one very funny novel. Hiaasen knows how to pick his targets and hits them with remarkable consistency.

Basket Case is available at bookstores everywhere at $13.99 for the trade paperback edition from Grand Central Publishing. It was originally published by Knopf in 2002.

Email ThisBlogThis!Share to TwitterShare to FacebookShare to Pinterest
Labels: Books