The Upper Valley Bluegrass Festival at the Opera House in Lebanon, NH held this past weekend differentiated itself from being merely a pair of very good concerts by offering an afternoon of workshops at the nearby AVA Gallery and Art Center just around the corner from the Lebanon Opera House where the concerts were performed. By offering workshops in this delightful, light and airy space, Opera House Executive Director C. Partridge (Buzz) Boswell, has created an event that should prove to be an ongoing success. In the evening Crooked Still opened with a fine set and the Del McCoury Band concluded the festival with nearly two hours of some of their best work.

The three announced workshops featured local bluegrass folk making presentations about the nature of bluegrass music. Ford Daley, a bluegrass veteran dating back to the days when bluegrass penetrated Harvard Square, discussed the genesis of classic bluegrass music, playing recordings of classic first and second generation greats and then placing them in a context of developments in the music to the present. Steve Hennig chatted with banjo partisans about his approach to the banjo. Both workshops were satisfying and interesting. Unfortunately, I didn’t attend the jamming workshop led by Rich Heepe, because I was otherwise engaged.

Apparently, earlier in the week Buzz Boswell had called Ronnie McCoury to ask whether a member of the band, perhaps bassist Alan Bartram, could present a brief workshop. Ronnie assured him it would happen. Shortly after 2:00 PM, as Ford Daley was winding up his workshop, the entire Del McCoury Band came into the room, tuned up, and offered to take any questions the thirty or so people assembled there might have. For the next 90 minutes or so, Del, his sons Ronnie on mandolin and Robbie on banjo, and Bartram on bass sang, talked, and laughed along with the delighted people lucky enough to have come to the workshops. 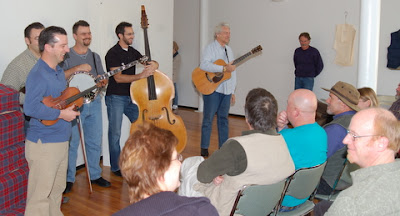 I suppose this is the place for me to make a confession. We first saw the Del McCoury Band at Merlefest in 2003, and I hated them. I watched this vain man with the perfectly combed and sprayed white hair dominate his compliant sons as he sang in his piercingly high voice 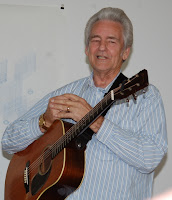 and I thought, “There he is, that tough old guy forcing his poor kids to perform, and they really don’t want to be there.” Was I ever wrong! I really didn’t get the whole thing. Not the single microphone. Not the intricate choreography required by that mic. Not the wonderful high tenor of McCoury’s voice. Not the stage character he has so successfully created. And certainly not the great skill of his two sons nor the loving interaction between them. At the McCoury workshop, all the positives were in plain view. Del came on in jeans and maybe a couple of hairs were out of place. The boys were informal and relaxed. They answered questions about how they get songs, how they work them up, their instruments, and whatever else people asked. And they sang some of their biggest hits, including “1952 Vincent Black Lightning” which has to be hard on Del’s voice. They only stopped when they were told that the folks at the auditorium were ready for them to do a sound check. What an opportunity to see a storied band with its hair down in a fully informal setting. 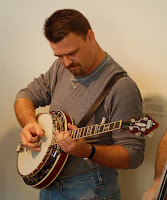 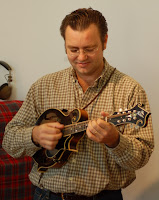 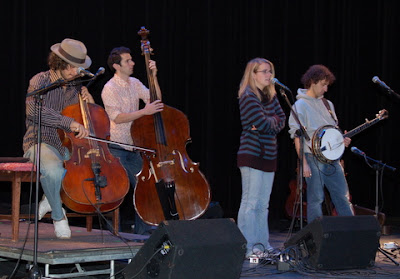 Oh, there was a concert, too, a complete sell out. Crooked Still opened with a one hour set greeted with high enthusiasm and a standing ovation brought them back for a rousing enc

ore. Befitting the next to last appearance of Rushad Eggleston with this band, he was particularly warmly applauded and took his recognition with rare good h

umor and humility. It’s a little hard to write about this band because next time you see them Crooked Still won’t be the same. Eggleston, the first string student admitted to Berklee College of Music on a full scholarship, has forged much of Crooked Still’s sound through his unique cello play which provides both a melodic and percussive base. It’s up to each viewer to decide whether his carefully chosen flashy, over-the-top dress and constant mugging add or detract from the overall effect of Crooked Still. I guess my own answer to this question is implicit in the language I’ve used to describe Eggleston. Nevertheless, his outrageousness was well-received by a vocal portion of the audience. Perhaps his exceptionalism is generational, creating new and enthusiastic consumers for acoustic music, and the contrast between Crooked Still and the Del McCoury Band was clear.

Nevertheless, Crooked Still contributed mightily to this festival. They are an acoustic band; no electric instruments here. Corey DiMario on bass provided strong support for the band’s work. Unfortunately, bad mixing made it difficult to fully appreciate Greg Liszt’s contribution on banjo. Liszt, who holds a PhD in biology from MIT (how many dr. banjoes are there?) has contributed to the development of banjo technique by inventing a way to make it a four finger instrument. I don’t quite understand what he does, and he’s promised to explain it to me, but adding the fourth finger certainly permits him to achieve new sounds on this quirky and difficult 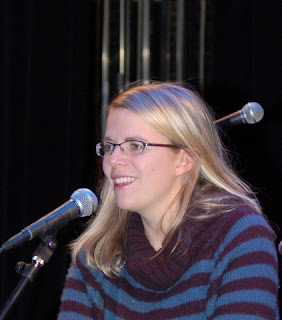 instrument. He toured with the Bruce Springsteen Seeger Sessions.

Aoife O’Donovan, however, remains the key to this group. The choices of music, they interpretations they give to them, and her own delightful song stylings all contribute to what makes Crooked Still work. Selecting from a wide variety of gospel, blues, and mountain music, Crooked Still relies on the flexibility of her voice, which ranges from a breathy sexy cry to a raucous bluesiness to achieve her desired effects. Often Crooked Still picks up the tempo on songs that other groups play slowly or slows the tempo for pieces often played fast. They take songs that are familiar regular offerings by The Stanley Brothers, Dry Branch Fire Squad, or Robert Johnson and turn them into their own. In the hands of Crooked Still, these songs aren’t covers, but new creations. O’Donovan makes little pretense at being an instrumentalist, giving in to bluegrass convention on only one song in this set, but she needn’t even do that, as her instrument is her voice, and she uses it better than most. It is her unique creation and contribution to the music. Crooked Still was brought back to the stage with a standing ovation and made an appropriate farewell to Rushad Eggleston. 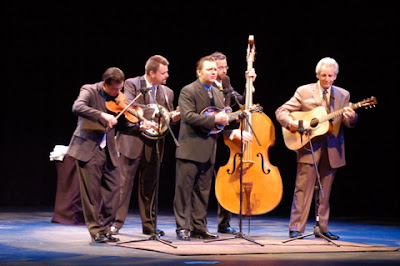 The Del McCoury Band came onto a nearly bare stage. Their single microphone is complemented by two instrument mics, but their approach is still the traditional single microphone used by bluegrass musicians since the genre’s earliest days. They rely on Del’s high tenor voice, a tight vocal trio, and superb ensemble musicianship. At first glance, you’d be likely to label this group as a traditional bluegrass band. But are they? One of their biggest recent hits, 1952 Vincent Black Lightning, was written by Richard Thompson, a widely acclaimed British folk rocker. Shawn Camp, whose country songs have been widely recorded, contributed 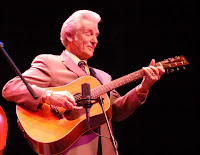 to their catalog as has Verlon Thompson, another country legend. Of course they play Bill Monroe, Jimmy Martin, and, of course, compositions from both Ronnie and Del McCoury. He has appeared with String Cheese Incident, Phish, and Steve Earle, to suggest the breadth of his appeal. He has been appearing with his two sons, Ronnie and Robbie for many years. Rob McCoury has been recognized as IBMA Mandolin Player of the Year eight times, and the band has been named Instrumental Group of the Year twice and Entertainer of the Year nine times.

At the opening of their set, the McCoury Band played six or seven songs and then opened up the rest of the show to requests from the audience. This was a knowledgeable crowd and requests came from all eras of the McCoury band. Only once did Del say he wouldn’t sing a song, because he wasn’t sure he could remember it well enough for a good performance. Since McCoury’s performing career goes back to the early sixties, when he played guitar and sang lead vocals as one of Bill Monroe’s Bluegrass Boys, the requests covered a vast catalog of numbers and experience. It is unusual for a band to take so many requests, as most prefer to work from a set list and to push work from their latest CD. McCoury eschewed this approach, taking reques

ts and building them into a varied and comprehensive program by varying key and tempo between songs on the fly.

While McCoury’s high tenor voice is often remarked upon, he is also a

wonderful rhythm guitar player, contributing strongly to the instrumental as well as vocal sound of his band. Rob McCoury is a fine banjo player who plays superb backup banjo, too. Many people who hear the banjo played are aware of the pyrotechnics of which the instrument is capable. Fewer focus on the importance of tasteful banjo backup to a bluegrass band. Rob McCoury is particularly masterful in his backup work. Jason Carter, on fiddle, has been with the band for nearly fifteen years. A three time fiddler of the year, Carter plays inventive and thoughtful breaks and contributes a fine voice to the vocal trios. As he has aged, Ronnie McCoury’s voice has come to sound increasingly like his father’s. He has forged a career away from the band as a record producer and has recently released a children’s album, too. The McCoury Band has recently initiated its own label for production and distribution of its music as well long-time favorite Larry Sparks, also a multiple IBMA award winner, and the recently released Merle Haggard Bluegrass Sessions. In short,

Del McCoury lives in the very center of the bluegrass world, affecting those around him with his voice, music, and personality.

At the end of their set, the band returned in response to a long standing ovation and offered a four number encore to the very appreciative crowd. Buzz Boswell has forged an interesting and compelling first effort for the Upper Valley Bluegrass Festival. He found ways to appeal to a broad spectrum of bluegrass fans, offering something for the range of traditional to progressive bands. Already booked for next year is Rhonda Vincent and the Rage. The Lebanon Opera House shares facilities with City Hall on a picturesque town square that also features two good restaurants. Our dinner at Salt hill was entirely satisfactory. By seeking to merge the standard concert format into a more ambitious indoor festival, Boswell appears to have hit on a fine format, which he will improve upon as time passes. This event offered a terrific beginning to the coming holidays and long North Country winter. 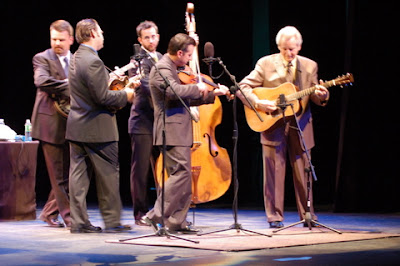