The summer bluegrass festival season in New England kicks off May 29 –June 1 at Strawberry Park in Preston, CT. Located within pretty easy distance of the huge Boston – New York axis (Boston = 100 miles, New York = 138 miles), Strawberry Park offers just about everything a bluegrass fan could wish for. It’s spacious and very well equipped campground offers everything from full hookups with Wi-Fi to free rough camping. The lineup is absolutely first class. The kids academy provides supervision and musical instruction for young musicians. Sound at Strawberry Park has been excellent; food from the campground’s extensive snack bar as well as a couple of vendors is good. There’s plenty to do between musical events. If there’s really bad weather, the campground has a large indoor space to move performances into. The weather at Strawberry Park in late May can vary. There’s usually at least some rain. Come prepared for a range of weather possibilities. All told, Strawberry Park is one of the finest venues around for holding a bluegrass festival. 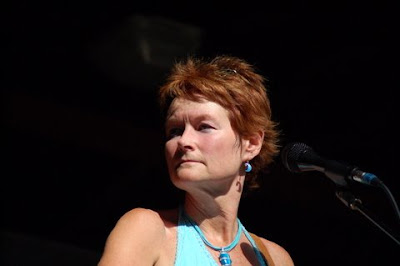 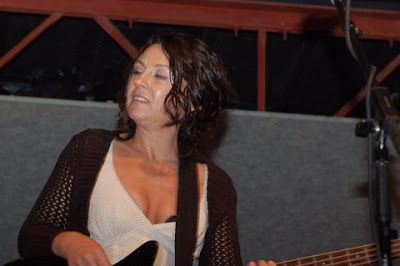 Promoter Buck Bieber and his staff have once again assembled an interesting and varied lineup designed to appeal to a broad range of tastes. Fans of traditional bluegrass will be happy to see Rhonda Vincent and the Rage, Dale Ann Bradley, Doyle Lawson and Quick Silver, Dry Branch Fire Squad, Carl Shiflett and Big Country, and the Grascals. More contemporary sounds come from The Gibson Brothers, The Lonesome River Band, and Laurie Lewis. Toward the progressive end of the bluegrass spectrum, Tony Trischka, The Greencards, and Peter Rowan will be on hand. Anne and Pete Sibley, who come from Connecticut but live in Wyoming bring a western gospel/folk sound while Amy Gallatin and Stillwaters offer country oriented bluegrass sound from the west transplanted to Connecticut. The festival brings a balanced program with something for everyone, which keeps on coming. Meanwhile, out in the campgrounds there’s plenty of jamming for everyone. 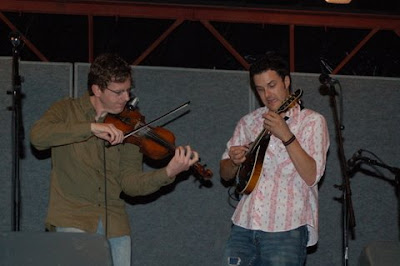 The festival opens on Thursday evening with Amy Gallatin and Stillwaters. This mellow and melodious band provides a good transition from arrival and setup into the bluegrass mode. Although born in Alabama, many of Gallatin’s formative years were spent in Idaho. Dobro picker Roger Williams is featured in her band. They’re followed by Anne & Pete Sibley, a duo who now live in Jackson, Wyoming, but who both come from Connecticut. Someone at Strawberry Park not only has an ear for good bands, but programs with a sense of humor. The Greencards present torrid picking by Kym Warner on mandolin and Eamon McLoughlin on fiddle, while Carol Young’s evocative singing carries the vocals and provides the bass. They’ve been through several guitarists, but always had a strong person in that position, too. Last time we saw them they had virtuoso Andy Falco as their flat picker, but who knows. This is an exciting band to watch and hear. 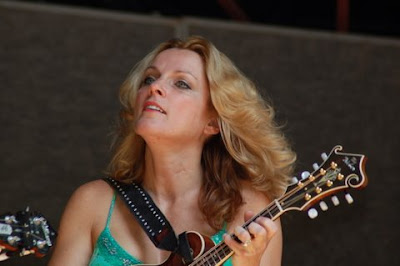 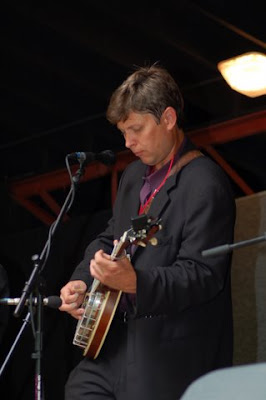 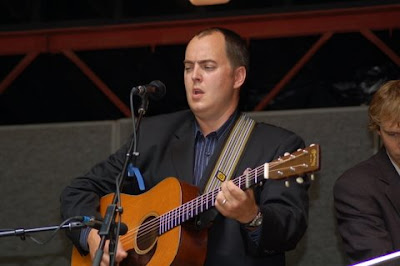 Friday offers one more set each from Thursday’s groups. Rhonda Vincent and the Rage are always reliable performers, filled with energy and tunefulness. Rhonda stays to greet her enthusiastic fans until the last one leaves, giving back all the time. There’s no reason to believe she isn’t the genuinely nice person who comes across from the stage and in her personal interactions with her fans. The Gibson Brothers are touring this year in support of their new disk Irons and Diamonds. This disk opened at #5 on the Billboard bluegrass chart in its first week of release. The Gibsons can always raise a crowd’s level of excitement; their new album only adds to the mix. The Peter Rowan Band also appears on Friday. I’m told that that the Peter Rowan Band appearing at Strawberry Park this year is the bluegrass version of Rowan’s tour. I’m eager to see this aspect of Rowan’s repertoire.
Dale Ann Bradley 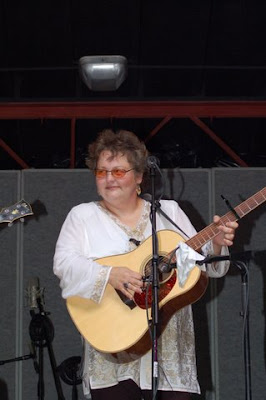 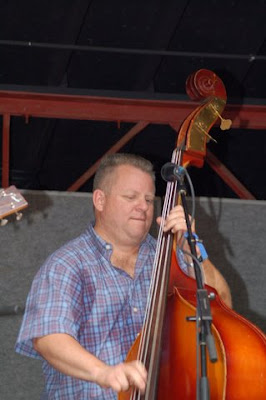 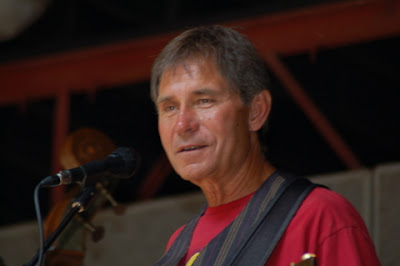 The lineup for Saturday offers a completely new set of performers. Tony Trischka leads off the day with his Double Banjo Spectacular. The double banjo album re-established Trischka as one of the most creative and able banjo players in the world. His new album, Trischka Territory, demonstrates why: he’s among the most versatile and restlessly creative musicians around. Dale Ann Bradley brings one of the purest voices in traditional bluegrass to the stage next. Her familiar songs and lively personality fill the lovely glade forming the natural outdoor auditorium of Strawberry Park’s performance area. Dry Branch Fire Squad returns next for a Saturday performance. They will also do their traditional gospel bluegrass program on Sunday morning. Featuring Ron Thomason’s sharp satire and a fine band offering traditional bluegrass and raw, primitive gospel, Dry Branch Fire Squad, after more than thirty years on the road, remains one of the most delightful and interesting bands there is. One of their great gifts to festival audiences is the humor they bring, a commodity often lacking in the genre. Karl Shiflett & The Big Country Show play bluegrass the way it might have sounded and looked in the 1950’s. With his hound-dog face and huge smile, Shiflett deftly leads a traditional band through their paces. Laurie Lewis & The Right Hands make an appearance on Saturday afternoon and again on Sunday. Lewis brings a California sensibility and tone to her bluegrass, which is refreshing and lively. Supported by a very able band, she supplies a first rate opportunity to hear music that reflects the traditional while exploring new avenues of sound and content. 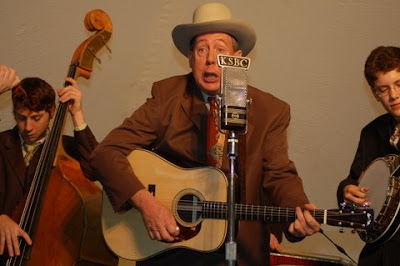 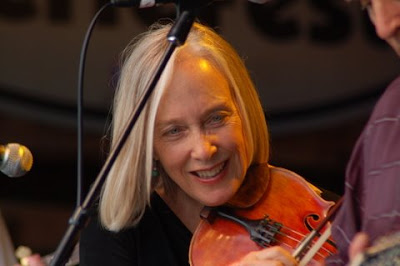 After the supper break on Saturday, add Doyle Lawson & Quicksilver and The Grascals to the mix for one of the highest quality and most exciting evenings of bluegrass imaginable. Lawson, mixing traditional bluegrass with a strong component of gospel bluegrass, has stood astride the bluegrass world longer than many bands exist. He is noted as an exacting task master and the list of former members of his band now among the bluegrass elite is nearly endless. One musician says, “Four years with Doyle is like earning a Ph.D. in bluegrass performance.” Be sure to look past Doyle’s flashy performance garb for the quality of his band’s musicianship and entertainment value. The Grascals, probably the pace setter group for the spate of new groups composed of Nashville session musicians who have formed bands in recent years, has had a series of hit songs, a number of IBMA awards, and successful tours over the past four or five years. They have recently taken on a new permanent fiddler to replace Jimmy Mattingly who returned to touring with Dolly Parton. Jeremy Abshire is the new fiddler, and it will be interesting to see how he fits in. The last addition to the band, Aaron McDaris on banjo, added to the mix. Mattingly’s energy will be missed, but I’ll wait to make any further judgment. 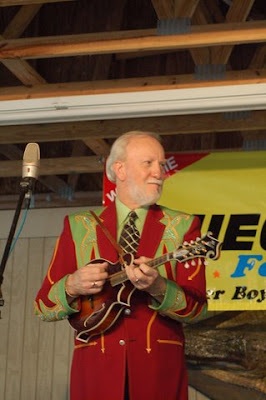 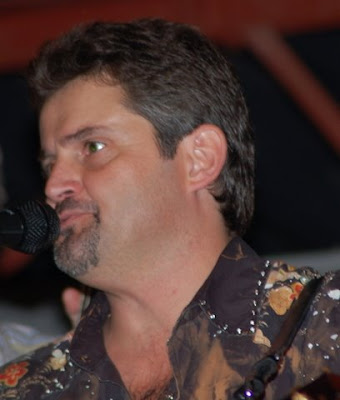 Sunday at many bluegrass festivals is often getaway day. People pull out early to return home and prepare for the coming week, or leave after one or two Sunday morning performances. People leaving Strawberry Park early will be missing out on a day that finishes with one of the groundbreaking bluegrass performers who remains sharp and cutting edge today. The day begins with Dry Branch Fire Squad’s traditional gospel hour followed by Laurie Lewis. The Kid’s Academy Performance at noon is an event that true lovers of bluegrass music need to support. For two days, these kids have been working with the Academy staff, learning to play bluegrass music and putting together a performance. Ranging in age from five or six to mid-teens, these kids are attractive and entertaining. More important, they represent the future of the music and deserve attention and the applause of an appreciative audience. It’s important to remember that these kids represent the future of our music. In the afternoon the Grascals present a second set. This year’s closer at Strawberry Park is The Lonesome River Band. Sammy Shelor on banjo is one of the storied banjo performers of the genre. He commands the stage as he moves like a combination of dancer and snake around the stage as well as into and away from the microphone. I haven’t seen LRB since Mike Hardgrove on fiddle replaced Matt Leadbetter’s resonator guitar, but I bet the band hasn’t missed a beat. Hardgrove is a returning member as is Brandon Rickman as lead singer and guitar. Andy Ball on mandolin and Mike Anglin on bass fill out the band. Bringing a Rock sensibility to the traditional bluegrass sound, this band simply can’t be beat. If you’re smart, you’ll stay to the end.
Strawberry Park Kids Academy 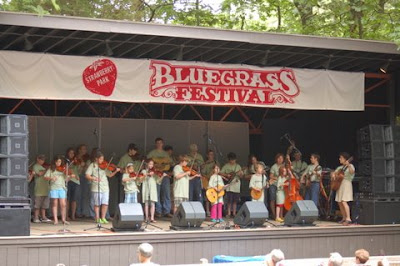 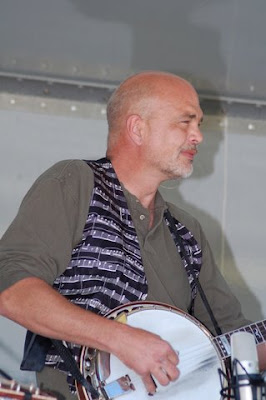 Once again, Strawberry Park promises to be one of the best bluegrass festivals in the northeast this summer. Come on up and enjoy the fun.

All pictures by Ted Lehmann. Use by permission only.