The Rise of American Democracy by Sean Wilentz - Book Review


For some time I’ve wondered how and why political parties developed in America. George Washington warned against political parties, holding that they were divisive and would corrupt the new republic being founded. But it didn’t take long for a party system to develop. By the time of the accession of John Adams to the presidency, the conflicts about how the new country should govern itself found their voice in the development of organized factions, and we were on our way to the party system. Sean Willentz’s massive book The Ris 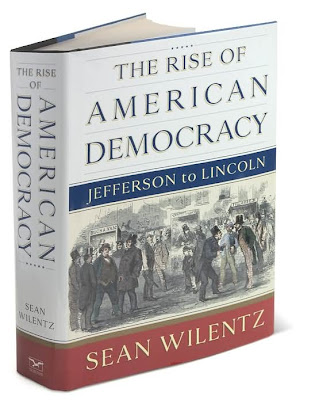 e of American Democracy: Jefferson to Lincoln tells the story of the growth of the party system and the eventual emergence of a two party system in America. It’s sometimes difficult to remember in these days, when we are subjected to endless hours of discussion of the process of politics, that people actually differ on substance. Political parties often reflect genuine philosophical and practical differences in belief about how the nation should be governed, what it stands for, and what actions it should take. These differences are reflected in people’s choices about identification with political parties. It turns out that as long as people identify with the needs and desires of like-minded others, parties are inevitable. During the first half of the nineteenth century, the country was developing and changing rapidly, issues separated regions socially and economically, and political matters were unsettled enough to give hope to many factions.

Within this context, Wilentz covers a period of about sixty years with very close detail. He uses the personalities of the big players and issues. Jefferson, Jackson, and Lincoln dominated the presidency, while lesser lights like van Buren, Taylor, Tyler, Polk, and (worst of all and much like George Bush) Buchanan gummed up the works. Banking, westward expansion, internal improvement (today read infrastructure), and tariffs dominated the issues, but overall the specter of slavery reigned. The Founding Fathers ducked the issue, leaving it for succeeding generations to settle, perhaps believing the problem would collapse of its own inefficiency and never anticipating the need for the bloodiest strife in our history to settle the problem. The other set of personalities and powers dominating the book are politicians who never made it to the presidency. Daniel Webster, Henry Clay, Stephan A. Douglas, and John C. Calhoun were the legislative giants of the era. The two largest conflicts during this period had to do with the role of the federal government in regulating money and the question of the expansion of slavery into the new territories being admitted as states. Wilentz clearly demonstrates that later southern apologists claiming that states rights, not slavery, was the central cause of the Civil War are revisionists efforts to rehabilitate the south. For nearly half a century preceding the war, slavery was the single most dominant issue: where it would be, how chattel slaves could be bought and sold, what property rights concerning human possessions slaveholders could maintain. The devil’s bargain to count slaves as 3/5 of a human being for census purposes while never granting any rights to these people enshrined in the Constitution assured the dominance of a rather small minority of slave owners in this continuing struggle.

Through the 1850’s as the Whig Party dissolves and the Republicans invent themselves; the rise of Abraham Lincoln seems almost inevitable, as does the dissolution of the Union. Particularly interesting to me was the platform in which Lincoln ran. I have often thought that, had he been alive today, Lincoln would have been a democrat. The Republican platform of 1860 pretty well seals the deal for me. Ever since I can remember and longer than that, the Republican Party has claimed to be the party of Lincoln and left us to be represented by Jefferson and Jackson. Actually we deserve Lincoln, too. A look at the platform he ran on in 1860 shows this pretty clearly. Why not take the appellation of ”the party of Lincoln" away from the Republicans.
Here're some of the major points of the Republican platform of 1860:
1. Condemned John Brown (anti-terrorism)
2. Opposed nativist changes in the immigration laws.
3. Backed the Homestead Act. (free land for those willing to (im)prove it)
4. Federal aid to internal improvements (infrastructure).
5. Asserted that the "normal condition was and always has been Freedom (opposed slavery)
During Lincoln's campaign, he was dubbed the "Railsplitter," i.e. the representative of the common man. Furthermore, his campaign forcefully opposed the efforts of southern hotheads to destroy the union, standing instead for a reasonable approach that would maintain the Union, in which he was eventually joined by Stephen A. Douglas. (pp.762 -763 of Sean Wilentz, The Rise of American Democracy. It would certainly be nice if Democrats could legitimately claim Lincoln as well as Jefferson and Jackson, two somewhat problematic figures. The Republican “southern strategy” of the last generation bears remarkable similarity to the approaches of the party labeled Democratic in the pre-Civil War era.

The period abounded in a multiplicity of factions calling themselves parties: Loco Foco, Federalists, Barnburners, Hunkers, Whigs, Free Soilers, and the Liberty Party among others. Irony, too, can be found. As Americans struggled to determine what the democratic ideal would look like, they explored suffrage (women, blacks, people who did not own property), slavery, the nature of money and debt, national expansion, international place in the world, and a number of other often conflicting and confounding issues. The irony of the pre-Civil War Democrats becoming the party of FDR’s New Deal and the party of civil rights while the Republicans opposed slavery and encouraged the development of national transportation networks but became the fomenters of today’s Republican party, which has lost almost all representation in the northeast cannot be missed.

The Rise of American Democracy is not a book for the faint of heart. It contains nearly 800 pages of pretty dense text and over 200 more of notes and index. It is filled with detail. Nonetheless, for people who consider themselves students of American history, this book is essential, and pleasurable, reading. The book can be obtained from local bookstores and online. In trade paperback, it retails for $19.95, a good buy on a per page basis. In terms of its body of information it’s really a great read.