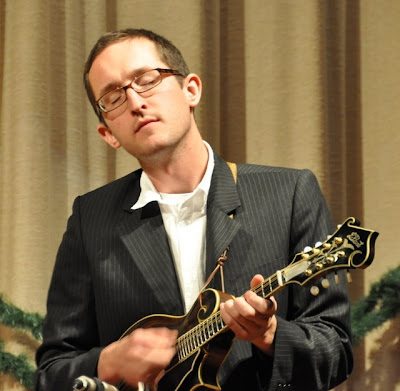 Joe Walsh’s first solo project “Saturday Night Waltz” is a tour de force for the young mandolinist who has now joined The Gibson Brothers and will make significant contributions to their sound. Such projects serve as showcases for the artist’s versatility and strength. Walsh more than ably showcases his own work as an instrumentalist and composer in this very strong album, but goes beyond that in assembling a fi 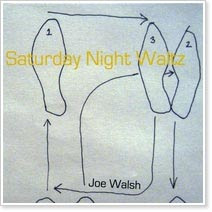 ne group of New England musicians to present modern and traditional acoustic pieces that do honor to the musical talents available in this often musically under rated region of the country. Walsh was the first student enrolled at Berklee College of Music as a mandolin performance major. Two cuts from this CD can be found on Joe’s MySpace page here.

“Chasin’ Shane” an instrumental by Joe Walsh and banjoist Wes Corbett, opens the CD with a blast of sound. The core band for this CD is composed of Walsh and Corbett with Lincoln Myers on guitar, Mike Barnett on fiddle, and Karl Doty on bass. This group of mostly New England musicians will please many and surprise those who don’t know the depth and strength of New England bluegrass/acoustic music. Walsh demonstrates his liquid mastery of tone as well as his delightful syncopations on the mandolin. Barnett, the principal fiddler on Tony Trischka’s Double Banjo Spectacular was still in high school or just out when this was recorded. His play demonstrates maturity way beyond his years. Corbett’s flights up and down the fretboard as well as his contemplative moments on the banjo are clear and sometimes startling. This song demonstrates great dynamic range in each of the instruments as well as capacity for including a range of moods within the space of only a few minutes of melodic excitement. 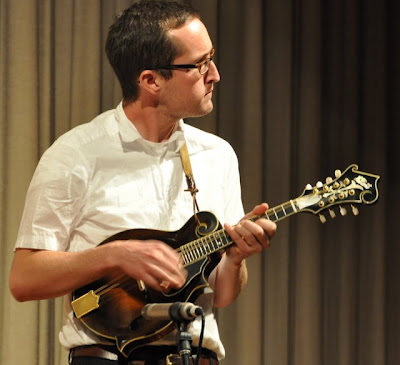 Moving from the jazzy opening cut to John Prine’s “Angel from Montgomery” provides an interesting transition and showcases the versatility of this group and particularly the host, Walsh, whose vocal is down and dirty here. Again, Walsh’s mandolin weaves melodic circles around Prine’s song. Ben Demerath contributes harmony vocals here. The bluesy tone, with Barnett providing a framework of both melody and chop while Corbett’s banjo and underlying blues drone is just right for Walsh’s voice.

“Fly Around My Pretty Little Miss” is a traditional fiddle song with a strong melody allowing all the instruments to show their stuff. Ashleigh Caudill plays bass on this track along with several others. Each instrument plays an extended break while others weave their magic around it and mesh together for ensemble play. Walsh’s clean and accurate mandolin is always in evidence and often leads the way.

In the ways of such “solo” projects, the performers appearing on this CD are found almost interchangeably on each other’s recent or forthcoming projects. Many of those on Walsh’s “Saturday Night Waltz” are students or graduates of Berklee College of Music and well known in the Boston area, playing in a variety of musical aggregations. Each deserves wider recognitions for performance in bluegrass and way beyond.

In “Whiskey Before Breakfast” another traditional fiddle tune known and played by many aspiring bluegrass pickers, Walsh approaches the initial run-through of the melody in an almost thoughtful and highly melodic tone. Meyers comes in with his guitar solo in the same tone as he and Walsh trade notes back and forth. The two instruments complement each other in ways this song seldom sees. The entire piece features only the two instruments in call and response mode making this song ring anew. The almost leisurely pace the take, in contrast to the breakneck speed often used, gives “Whiskey Before Breakfast” a new and welcome sound.

Robert Earl Keen’s “I’ll Go On Downtown” sung by Ashleigh Caudill, Meya Kerman, and Ben Demerath with Flynn Cohen on bass strikes another blues note in its evocation of urban loneliness. The lyric celebrates “slipping” off and going out to carouse downtown while knowing that “tomorrow I’ll be home.” The singer asks, “Why am I feeling so lowdown and mean.” She answers by saying she’s given up smoking and drinking, keeping the “devil deep down inside.” Roger Williams on Dobro adds exactly the requisite tasteful notes to help create the right sound. Downtown represents release from the constraints and demands of polite society while not completely providing the satisfaction the singer seems to want.

“Chinquapin Hunting” and “Saturday Night Waltz” are both traditional tunes giving the instrumentalists lots of room to roam. Tashina Claridge, a frequent guest of Tony Trischka, gets to shine on fiddle in these two pieces, but Walsh’s clear and rich mandolin is never very far away and always contributes tasteful and thought provoking breaks. Particularly interesting is his use of syncopation, creating spaces between notes filled with as much richness as the notes themselves. Natalie Haas chimes in on cello in the second of these two pieces. There’s a general contemplative tone to each of these songs. 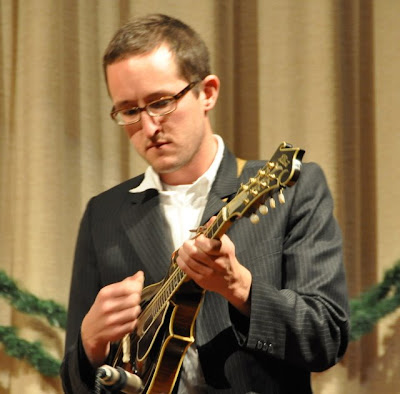 “Fall and I’m Not Falling” by Ashleigh Caudill is kicked off by a lilting Wes Corbett banjo break leading into Caudill’s pleasant voice along with Walsh’s harmonies. The song sounds traditional even though it’s fresh out of the box. I wished for a little more clear enunciation from Caudill in her singing of this song of not quite realized love in the autumn. As winter approaches, love loses its allure, even though spring and summer will recall the feelings.

Walsh, Myers, Barnett, and Corbett weave the instrumental through “The Good Part” a seemingly simple but increasingly complex instrumental that, characteristically of this disk, is highly melodic with an often lurking sense of loss and loneliness. “Waltz for Steve” carries a similar longing style, this time with strong elements of jazz sounds. Barnett, only eighteen years old, always contributes tasteful breaks that move the song along. Corbett’s banjo surprises with its gentle strength, not elements usually associated with the instrument. The driving finale, “Waitin” is, fittingly, another Walsh tune.

Walsh has joined the Gibson Brothers and will make significant contributions to this marvelous band. His debut album is a welcome addition, but I look forward to hearing him in his new spot. He's surely got a great future before him. 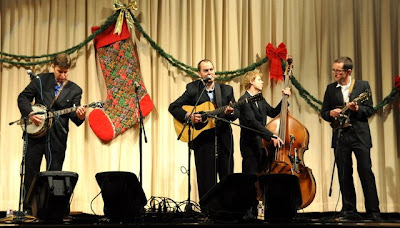