If I were teaching Education 101, I’d assign Frank McCourt’s Teacher Man as one of the first texts. Any experienced teacher reading through this excellent memoir will instantly recognize situations facing every teacher nearly every day – classroom management (an awful term for discipline), parent conferences, mindless mid-level bureaucrats, the kids who falls between the cracks, grammar and the research paper for students whose lives will never require either, and more. The book clearly and thoughtfully explores, through McCourt’s assumed confusion and lack of self-confidence, the chasms of despair and the few peaks of exaltation every teacher seeking to move kid’s experiences.

People who read McCourt’s Pulitzer Prize winning memoir Angela’s Ashes will be familiar with the framework of his story. Born in Brooklyn in 1930, McCourt’s family returned to their native Ireland when he was young. He lived in dire poverty throughout his childhood and youth, watching his alcoholic father and desperate mother through the loss of children, jobs, self-reliance, and every other source of any comfort. The book is filled with guilt, poverty, and darkness. McCourt finally escapes America as a young man and begins his odyssey towards some sort of reconciliation with his damaged self. 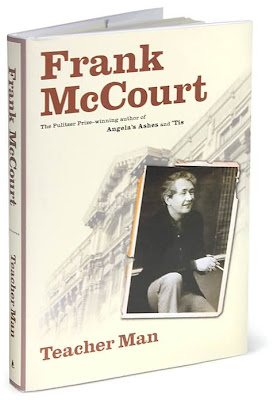 Unlike many young English teachers, McCourt is also saddled with a nearly unbearable and often humorous load of Irish Catholic guilt and a self-image approximating that of his most damaged immigrant students who come from a wide range of ethnic backgrounds. Slowly, he learns to allow his authentic self to emerge in the classroom, beginning to tell his own story and elicit the honest stories of his charges in return. His willingness to step aside from himself and ask “What’s going on here?” represents an important step in his development. Such questions are ones students in pedagogy courses rarely learn to ask of themselves. McCourt begins to understand himself within the context of his life with his students. Along the way, he drifts from school to school and even spends a couple of failure filled years vainly trying to re-connect with his Irish self by seeking a PhD at Trinity University, Dublin. His abject failure at this goal begins his road toward rehabilitation and success. McCourt falls into teacher hell as he is relegated to working as an itinerant substitute teacher in the vast New York City school system. Meanwhile, his marriage falls apart and he finds himself living in a dingy apartment over a waterfront bar in Brooklyn. He has hit bottom.

McCourt, over the years, develops an idiosyncratic teaching style which reaches its culmination when he is hired for a long-term substituting position at Stuyvesant High School, one of New York’s elite, competitive entry schools. There he is blessed with an enlightened English department chair, who offers him a full-time position. In a series of events featuring a feast of student produced ethnic foods and developing into a reading of recipes soon accompanied by student produced music and parental visits, McCourt develops a strongly student oriented, open ended teaching style which relies on asking questions and following student leads to triumph. Soon, his classes are filled with questing, able students, many of whom have never before had an opportunity to explore and develop their own stories.

As I read, I marveled at his versatility and shear courage in the face of administrative conformity and student apathy. And then I had a true epiphany. I knew, for certain, that the lesson would be read and picked up by some pedagogue who would write it up as a model lesson (or even unit) plan and publish it for other teachers to replicate, sending it irretrievably to the dustbin of educationalism. The real lesson in Teacher Man lies in Frank McCourt’s search for an inner authenticity that allows students the freedom to tell their own stories. The search is sometimes agonizing, often inspiring, and always compelling. As McCourt comes to accept who he is, his students can learn to learn from him. The lesson for prospective teachers lies more in their becoming than it does in the tricks of trade so many rely on. Teacher Man is a lesson in becoming a real person.

Teacher Man is published by Scribner and can be found at bookstores and libraries everywhere, often on the remaindered pile. Support your local independent bookstore.