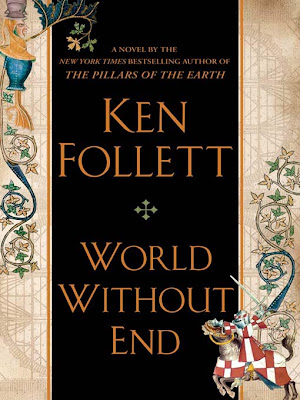 About twenty years ago Pillars of the Earth

, a long and very readable historical novel by Ken Follett detailing the building of the first Gothic cathedral in England in the context of a huge and enticing cast of characters that kept readers involved and enthralled. It established Follett, who had previously been best known as a writer of thriller fiction, as a master of the historical novel. Located in a typical market town that Follett called, Kingsbridge, the book has been hugely popular. Now, twenty years later Follett has published a sequel called World Without End,

I’m tempted to call it "Book Without End" because this is a very long and quite involved book filled with much more sex and a good deal less history than I remember from its predecessor. Nevertheless, memory is not reliable and World Without End is a readable page turner, just right for those looking for a good pot boiler beach book.

The novel follows the lives of Merthin, his brother Ralph, Caris, and her friend Gwenda through the period 1327 – 1361 as they encounter the problems and opportunities offered by the late middle-ages and the early dawning of the Renaissance. Forward thinking merchants and clerics battle the forces of the nobility and the church, which represent the most conservative impulses in a conservative society. The four children watch an attack upon Sir Thomas Langley by disguised knights. W 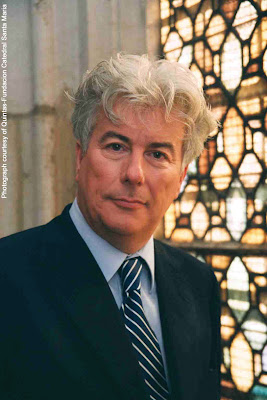 ith the aid of Ralph, Langley is saved despite a grave injury and swears Merthin and Caris to secrecy as he hides something beneath a tree in the woods. This incident will haunt the lives of all five as the novel progresses. Over arching the entire plot is the devastation brought upon England (and all Europe) by the great plague as Merthin becomes a master builder, Caris a nurse/nun, Ralph a knight and then an Earl, and Gwenda a peasant woman. Their lives and loves become the center of the plot. Follett is a master of the quick turn of events, which serve to keep the story fast paced and interesting despite its length.

Ken Follett has written a long, blustery, involving, and seemingly evocative novel of fourteenth century England. It’s filled with action, many characters, a complex plot, and lots of lubricious sex. It’s also filled with colloquial English phrases that risk breaking the deal between reader and author by evoking contemporary life just when he should be reaching deepest into the heart and mind of the willing suspender of disbelief. Particularly irritating is the feminist sensibility of the nun Caris, whose on again off again romance with Merthin is the center of the book. The use of anachronistic contemporary language and slang shows a sloppiness that 1000 page books and too little editing can allow.

by Ken Follett is published in hard cover by Dutton and is available at your local independent book store, chair store, or on line in print or as a recorded book. It’s a fun read, just light enough for long summer afternoons. For me, perhaps the biggest problem, having read it in hard cover, is that it weighs a lot. These old hands don’t manage such a weighty tome as easily as they once did.
Posted by Ted Lehmann at 9:11 AM