"Circles Around Me" by Sam Bush - CD Review 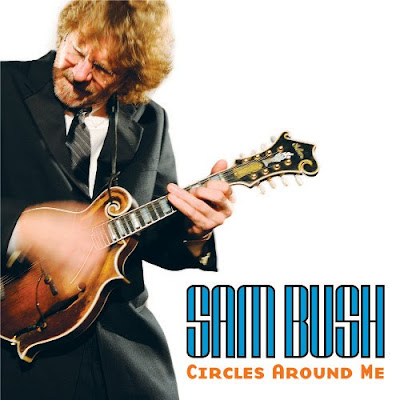 This review is an extended version of a review submitted to the Lonesome Road Review.
The opening guitar chords in Sam Bush's new CD “Circles Around Me” signal that this is a new turn in an old story. Sam Bush has produced a fine album of fourteen songs that return to an earlier era while forging into new territory. This is a neat trick, but Sam pulls it off with conviction and his customary high musicality. Sam uses his touring band of Scott Vestal, Byron House, Stephen Mougin, and Chris Brown to set and maintain the Bush sound while inviting a number of guests to share the microphone. Songs by Ebo Walker and an appearance by the late Courtney Johnson reach back to his days in New Grass Revival. Four songs exceeding six minutes in length suggest the importance of the jam in a Bush performance or recording. Three traditional songs and a guest appearance by Del McCoury recall the importance of straight ahead bluegrass music in Bush's music; the duo presents two Bill Monroe songs. All told, the CD communicates an elegaic tone in which Bush seems to be seeking to highlight and summarize his long, successful, and creative career. 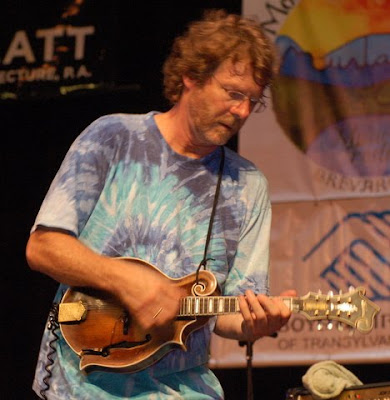 It often seems that at a certain age, Bush is 57, writers decide to look back at their careers and do some self assessment. These songs (or stories) are usually filled with regret, remembrance, joy, or some combination of these emotions common to people who have gained perspective and maturity. “Circles Around Me” introduces this CD and serves the purpose of opening the door of memory while leaving it open for still further growth and development. Albums often open with a bang, as if designed to grab and hold onto the listener. This song asks “how in the world did we get this far, holding tight to the tail of a shooting star?” Bush acknowledges the people and forces that have come into his life and suggests that those he's influenced through the years are “running circles around me now.” There's little if any regret to this refrain. 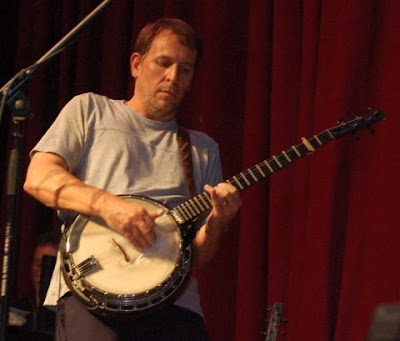 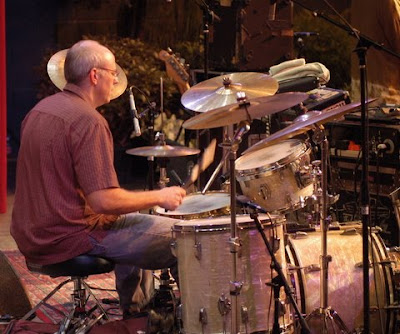 “Diamond Joe” is listed in the liner notes as a traditional song arranged by Sam. It harkens back to earlier New Grass Revival songs as well as his more recent solo album, “King of My World.” The story tells of a cow puncher who signs on with Diamond Joe, a Texas rancher who “carried all his money in a diamond studded jar, and he never was much bothered, by the prices of the law.” The cowboy signs on and, of course, works hard for no advance, and “never saved a dollar, in the pay of Diamond Joe.” The song has a lilting feel to it as the singer catalogs the difficulties of the cattle drive and working for a hard taskmaster. This is a pleasing straight ahead bluegrass song that captures an earlier age and sound in bluegrass music.

“Souvenir Bottles” by Brines, Cowan, and Bush is also a resurrected NGR song that fits perfectly into this CD. A bleak picture of road life uses a collection of bottles to recall bitter memories from road experiences, a “series of one night stands.” The longest song on the recording at over eight minutes, it gives free range for instrumental jamming without letting the instrumentals interupt the narrative of memory and regret. Vestal moves from a long elegaic melodic run into a series of virtuoso triplets before passing the lead to Bush, who reflects the melodies and cadences right back at him. It's easy to imagine the two great pickers standing eye to eye and toe to toe reacting to each other's work with eagerness and joy. The theme of age and youth in counterpoint comes from both the lyric, through the bottles, and the melodic line. Mougin, making his recording debut with Bush, as the older voice, captures the loss and desperation. 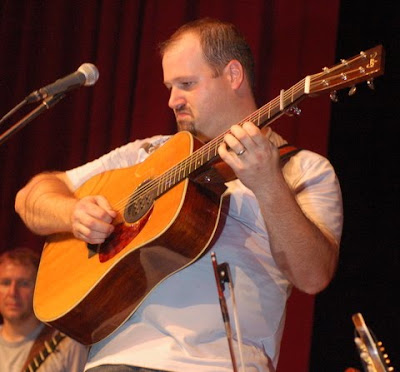 “You Left Me Alone” is an old Country Gentlemen song from the sixties written by Tom Gray and Jerry Stuart. Sam says he's playing a note-for-note reconstruction of John Duffey's mandolin play in this waltz. Scott Vestal's backup banjo behind Sam's voice is particularly interesting and strong as are his traditional sounding solos.

One of the most delightful elements of this album is the way Sam includes shades and shadows from his past in new and interesting ways. In his instrumental “Old North Woods” he has invited Edgar Meyer on bass as well as his wife Cornelia Heard, professor of violin in the Blair School of Music at Vanderbilt University, and their son sixteen year old George making his recording debut to appears on the the cut, which Bush characterizes as “Monroe sounding.” Meyer's bowed bass creates an underlying mystery to the very traditional sounding new song. As in many of the cuts on this project, the sense of treasuring the past while looking forward permeates the song. He also includes a lost fragment of himself and the late NGR banjo player Courtney Johnson playing a lovely banjo-fiddle tune called “Apple Blossom” recorded in 1976. 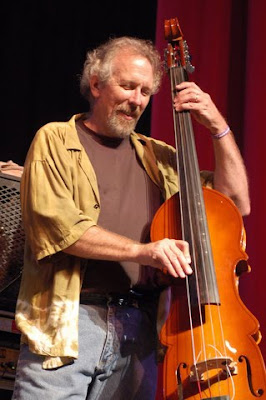 Story songs and murder ballads are an integral part of any well-designed bluegrass album. “The Ballad of Stringbean and Estelle” fills the bill in spades on this CD. Written by Sam with Guy Clark and Verlon Thompson (this should be enough said, but I'll go on anyway), the song has a droning mountain sound, capturing the east Kentucky or Tennessee sound perfectly. Vestal's haunting banjo and Sam's keening fiddle sound create the tone of danger and mystery surrounding the Brown boys holdup and murder of Stingbean and Estelle on Ridgetop, Tennessee. “It was just a simple plan to rob a banjo man, but he wouldn't let go of his opry pay.” The song details the struggle for the “cash in his bib overalls.” The robbery leads to the shooting of both Stringbean and Estelle. The song is drawn from the real-life tale of the murder of Grand Old Opry Star David Akeman. This song deserves to enter the repertoire of murder ballads to be sung long into the future.

“Blue Mountain” is a Sam Bush original instrumental with a couple of great bass solos from the inimitable Byron House. One of four jam songs found on Circles Around Me, this one gives free range to all five members of this great band. While each member of the band is given plenty of room to shine, the piece never loses its ensemble feel and vibe. In our conversation, Sam took particular joy in highlighting members of the band and pointing out that this album features his current touring band. He particularly noted Chris Brown's always tasteful work on drums. It is particularly in evidence on this piece, notably because the drums are there, but never intrusive. 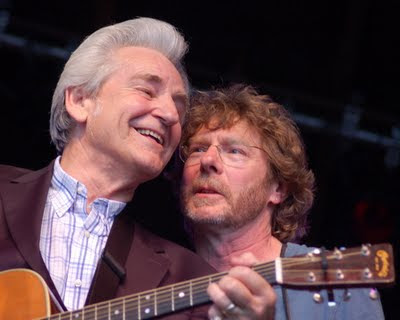 “Roll on Buddy” and “Midnight on the Stormy Deep” feature Sam's friend Del McCoury in reprises of two classic Bill Monroe tunes. They are done as straight ahead bluegrass songs, allowing McCoury's distinctive voice to shine through. When “Roll on Buddy” is compared to Monroe's 1937 recording with his brother Charlie, distinct differences emerge. Bush's picking is more disinct and a little slower, while Monroe's rapid double stopping always keeps the melody in the forefront. Bush willingly takes greater liberties with the melody while using fewer double stops. McCoury's falsetto on “Midnight on the Stormy Deep” captures Monroe to a tee.

Jerry Douglas does a guest Dobro stint on the Jeff Black's 2003 song “Gold Heart Locket,” a road song that suggests that the “only road home has all but washed away,” but the relationship symbolized by the locket can still be rescued. The risk of lost love and the power of commitment can still overcome the distance that the road can impose. The symbols of the rising river, the road washed away, the holes in the county road, crossing the river, and seeking reconciliation all weave their magic, held together by Douglas' Dobro. The song's text is ambiguous concerning whether the singer and his love object will succeed in finding common ground or not. 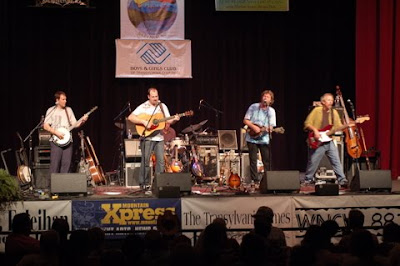 “Junior Heywood” is a Sam Bush and Edgar Meyer collaboration also featuring Jerry Douglas. Bush's plaintive mandolin, spare and melodic, combines with Meyers' distinctive bowed bass to create a sense of longing and searching. It serves as a thougful interlude within this CD. Ths song features just the three instruments, but nothing else is needed.

The CD concludes with “Whisper Your Name” by NGR mate Ebo Walker. It's a hard driving NGR song that brings the CD full circle, as in the title. It's followed by a surprise 15th song, “Hot Tamales and the Red Hots.” I can't find any information about this bonus track. It's a humorous and lilting song that brings the CD to a fitting conclusion, giving each member of the band a chance to shine one more time. (edit: One of my correspondents tells me this is a Robert Johnson song, and another reviewer comments, probably with good reason, that its inclusion signals ongoing exploration and development on Sam's part.) The bonus song stands as a kind of musical wink to Sam's fans. In recordings and in concerts, Sam Bush always plays at least one song by Bill Monroe and acknowledges Monroe's importance to his music. Bill Monroe was clearly a revolutionary innovator who Sam reveres for his contributions. He seems to be saying that he's one of many musical descendants of Monroe, and that his own contributions will certainly be surpassed by the next generation of mandolin pickers and bluegrassers. He says, “If I hadn't learned it from Bill Monroe, how could I have become what I have.” 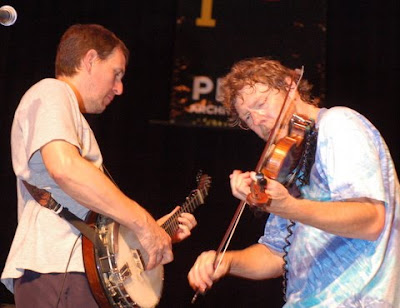 Some might suggest that this new CD forges no new ground. That would be a mistake. At the end of our conversation, Sam Bush remarked, “...the evolution continues, and it needs to.” This album is thoroughly contemporary and nostalgic at the same time, as it pauses to take a look at the past while forging forward into the future. Whether you download or purchase the physical CD, get it all and savor it in its entirety. 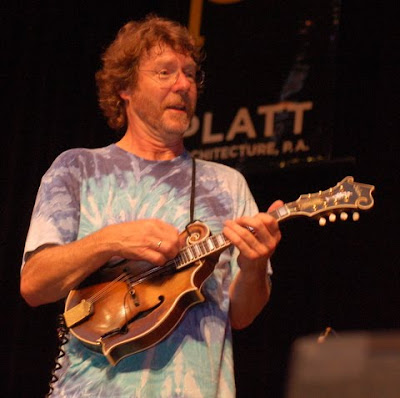 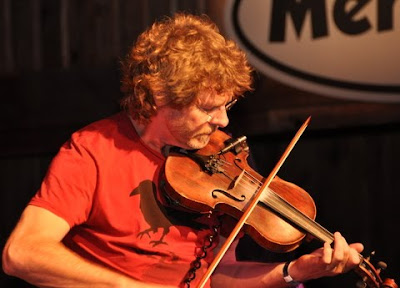