This story may take a little while to tell, but it's worth hanging in for.  In order to make it all clear, I'll have to provide a little background.  A little over two years ago, Irene and I became aware of a new blog written by Dr. Tom Bibey, a North Carolina family physician who also plays the mandolin in bluegrass bands and was working on a novel he called The Mandolin Case.  He was (and remains) a rather mysterious person, but as we read his blog, we came to know about him and to enjoy the personna emerging in his writing. After a while the exchange of e-mails led to some phone conversations and eventually a meeting that has blossomed into an enduring and valuable friendship for  us.  Now all this is coming to fruition with two events that will be unveiled at Strawberry Park in Preston, CT in early June as well as a five year project that Dr. B has put into motion called the The Tale of the Travelin' People's Mandolin.

As this is being written, The Mandolin Case is being printed.  Here's a sneak peak at the cover of this new novel: 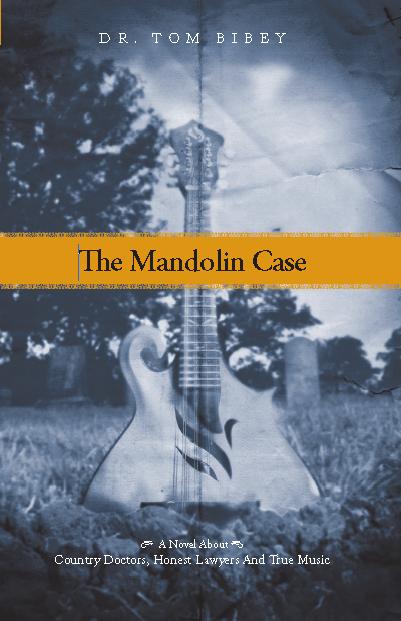 I don't propose to review the novel here since Irene and I both read it over a year ago and it's been through a lot of editing in the meantime.  Suffice it to say that it's a rip roarin' good story of medical and musical intrigue in a small town in the rural south.  (I couldn't find an M word for golf to keep the alliteration, but golf's in there, too.) To fill yourself in on Dr. Bibey (Alan Bibey's sixth cousin once removed on his mother's side) spend some quality time in the archives of his well-written and interesting blog: Dr. Tom Bibey: Stories of the Bluegrass Road.   Bookmark the site and be sure to visit it a couple of times a week as he updates his story.  On it, you can follow the development of the book, meet the characters in it, and keep up with Dr. Tom's musings on the bluegrass scene.  You might find me in there, too.  The Mandolin Case will soon be available through Amazon, Dr. B's web site, and directly from him at bluegrass festivals from Strawberry Park, to Red, White and Bluegrass, Musicians Against Childhood Cancer (MACC), and the IBMA World of Bluegrass in Nashville this fall.  I'll be reviewing the book some time this summer.
The Tale of the Travelin' People's Mandolin
A few weeks ago Dr. B gave me a call to tell me of a new idea he'd had.  As you read his blog and when you read his book, you'll discover that he believes in the power of music in general and more specifically in bluegrass music to solve the world's problems.  People who make music together, he argues, can't possibly make war on each other.  If people learn how to play a bluegrass instrument, Dr. Bibey says, they'll discover a new kind of peace and joy they wouldn't have without it.  Given the strength of his conviction, he decided to donate a mandolin to the world to enable a bunch of people to get a first hand experience playing bluegrass music. He asked whether Irene would be willing to be the first recipient of the People's Mandolin, learn to play his version, from his blog,  of  "You Are My Sunshine" on it, and pass it on to someone else after thirty days.  She agreed, and so the journey of the Travelin' People's Mandolin began.
Gabrielle Gray, Executive Director
International Bluegrass Music Museum
Watches Dr. Bibey Give Mandolin to Irene Lehmann 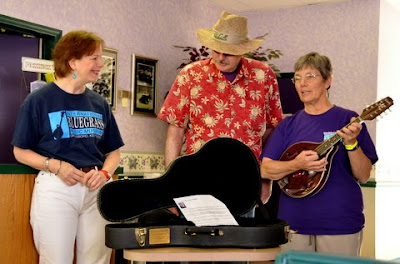 At the Dine 'n' Dash, just outside the Merlefest gate, we met Gabrielle Gray for breakfast.  Gabrielle is the Executive Director of the International Bluegrass Music Museum in Owensboro, KY.  She had heard of the projected journey of the People's Mandolin and wanted to be there on the first leg of its trip.  If all goes according to plan, the mandolin will move from hand to hand every thirty days or so for the next five years, when it is supposed to return for Merlefest 2015.  At that time, it will be presented to the Museum to be put on display along with its story and history.  Meanwhile, several dozen people of all ages and from all backgrounds will have had the opportunity to play the mandolin and learn a little more about bluegrass.
Here are pictures of some of the folks who've signed the People's Mandolin since Dr. Bibey handed it to Irene:
Ron McCoury Signs the Mandolin 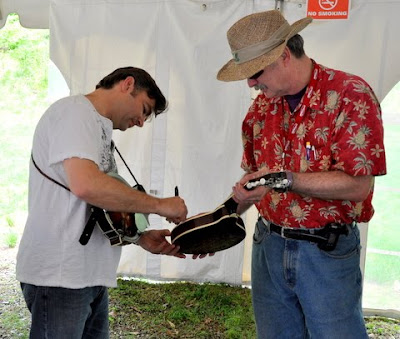 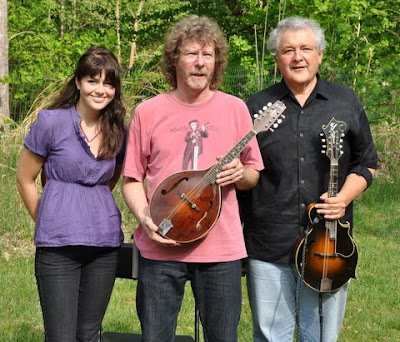 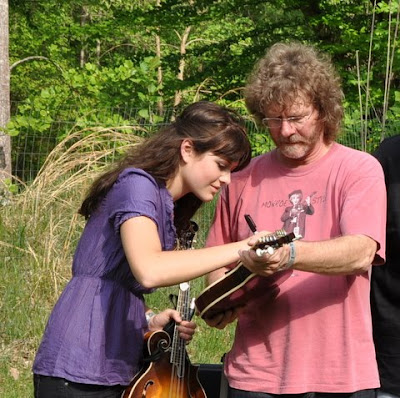 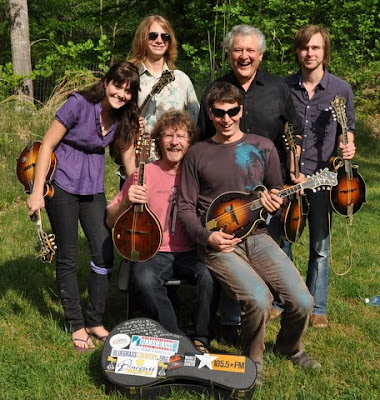 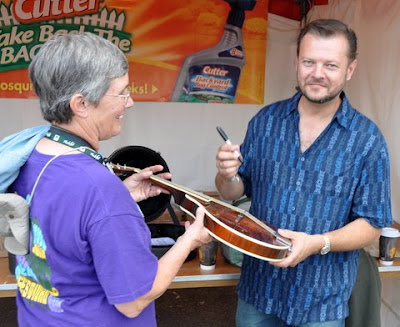 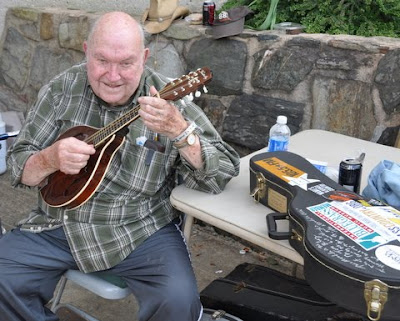 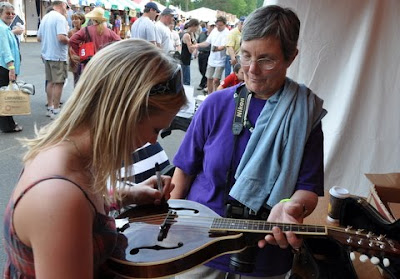 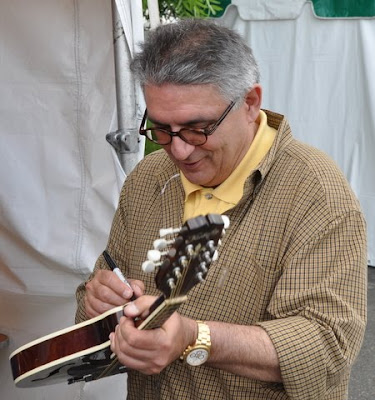 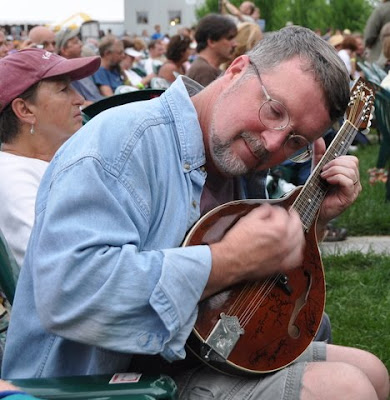 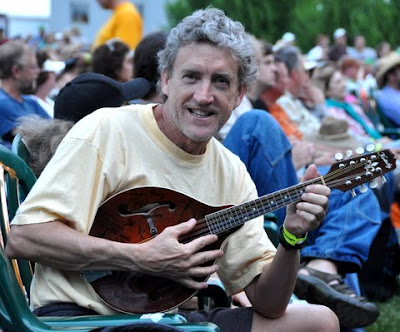 Irene Practices at Bluegrass on the Waccamaw 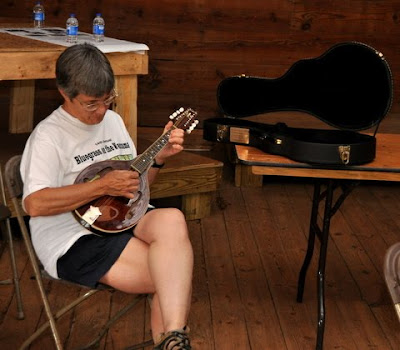 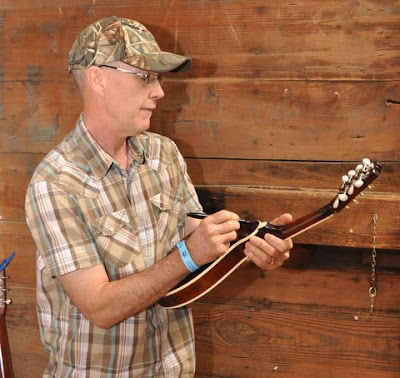 Darin & Brooke Aldridge at Bluegrass on the Waccamaw 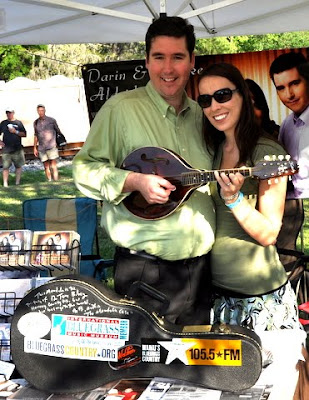 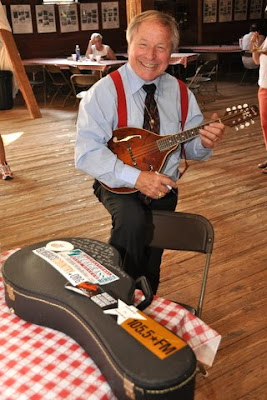 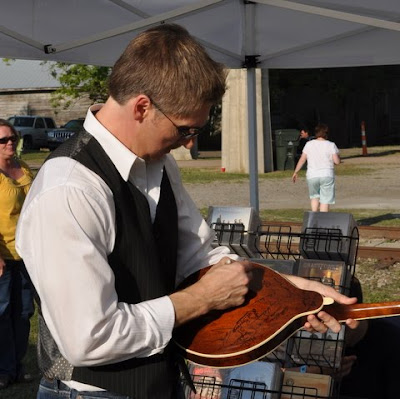 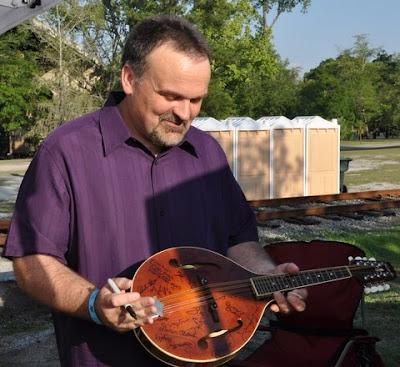 What Happens Next: We'll be taking the mandolin to Strawberry Park in Preston, CT next weekend and passing it on to someone who wants to play the mandolin, perhaps a young picker in the Kids Academy.  I'll post some pictures, and perhaps a video, of Irene playing the mandolin and then of her giving it to the next person.  If possible, I'd like to get it signed by Marty Stuart, who's headlining Saturday night there.  Soon a portion of Dr. Bibey's new web site, to be called The Mandolin Case.com will have a place for holders of The People's Mandolin to post their story and some pictures.  Each person will play it a little, learn a song, and in thirty days or so hand it on to the next person.  By the end of five years, who knows how many people will have played and signed the mandolin?  What stories it will have to tell! With good management and a little luck the plucky little mandolin will find its way back to Merlefest in 2015 and be enshrined in the International Bluegrass Music Museum. 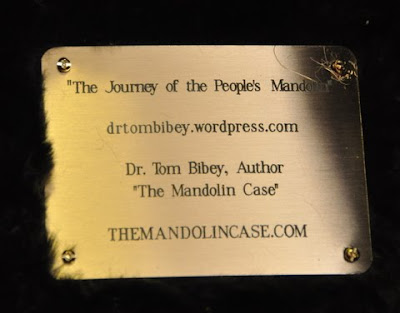 I sure hope you get to be the mandolin's steward for a while and to help it continue its journey.  Meanwhile, we'll all enjoy following it.
Posted by Ted Lehmann at 5:00 AM