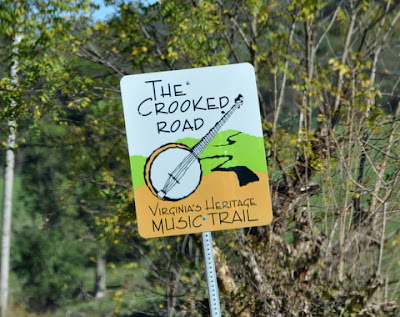 A visit to the Ralph Stanley Museum in Clintwood, VA fittlingly means also visiting the Virginia Coal Heritage Trail, which often runs along the same roads as The Crooked Road does.  Coal and the struggle to make a living in this difficult, rough environment in many ways helps define the tough, resilient people who made the music that was mountain music and became bluegrass.  Many of the first generation of bluegrass greats were part of the great Appalachian diaspora during the depression that took hundreds of thousands of people out of Appalachia and drove them to the industrial ring surrounding the Great Lakes where Bill and Charlie Monroe developed their own unique sound.  Ralph Stanley, who, with his brother Carter began his recording career in Bristol, VA, just to the south, never fully left his mountain roots, and his museum is located right in the center of this poor, proud, rugged region. 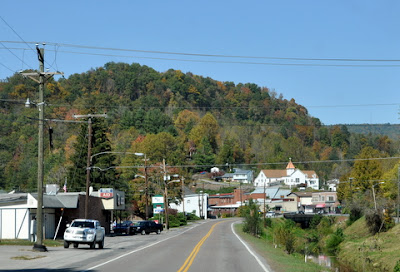 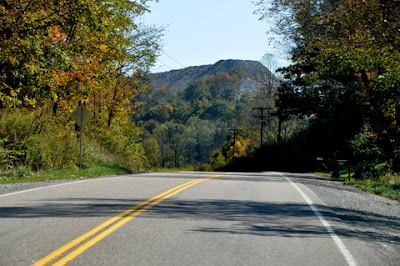 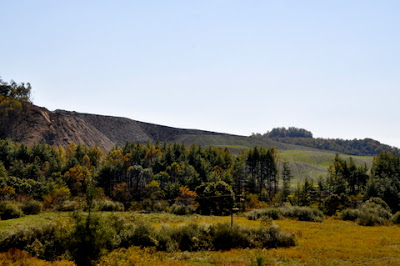 Driving north along U.S 23 from our lovely camp at Jessie Lea RV Park in Big Stone Gap, we followed a newish four lane highway through the mountains.  Along the way, we both tried to imagine moving around this rugged countryside during the period before paved roads were common in Appalachia.  Evidence of coal mining as an economic force and ecological disaster is seen everywhere along the road.  And it's easy to remember the recent disaster in Upper Big Branch, West Virginia in which 29 people were killed in a mine that had been cited for 3007 safety violation since 1995. Mining is a tough way to live and requires strong and determined people to bring the coal to the surface.  During our week in this region, I've been haunted by the lyrics of Darrell Scott's great song, You'll Never Leave Harlan Alive.

The coal towns in Appalachia are crowded into tight little valleys surrounded by steep, colorful mountains seeming to fall down around them.  Clintwood, VA is distinguished as the home of the Ralph Stanley Museum, which can be found on Main Street next to the Dickenson County Court House.  It is a beautifully restored hundred year old building that has been turned into an outstanding regional museum celebrating the career of Dr. Ralph Stanley and Traditional Mountain Music.
The Ralph Stanley Museum
and
Traditional Mountain Music Center 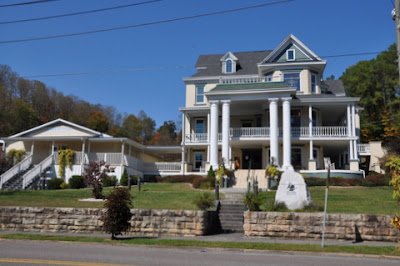 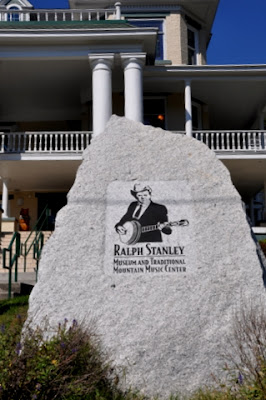 The hostess at the banjo-shaped reception desk welcomed us and told us about the museum.  She described the way the museum is layed out and requested we not take photographs upstairs, "because we want the people to come here and see it for themselves."  Of course, we acceded to her request, so there are no pictures taken upstairs in this fine museum.  Admission was $5.00 per person. 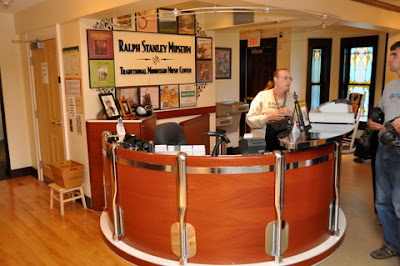 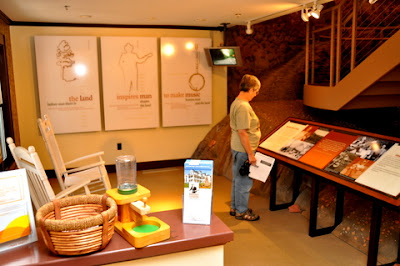 Display Case of Some of Dr. Ralph's Awards 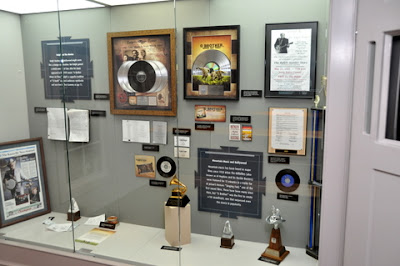 One of Dr. Ralph's Grammy Awards 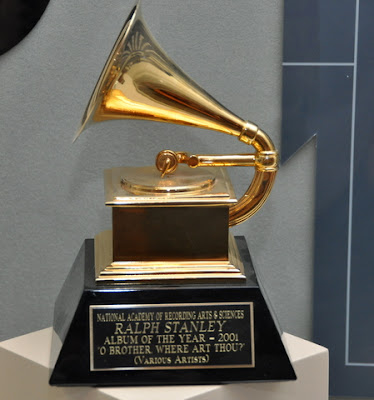 Five rooms upstairs use state of the art displays and a treasure trove of Ralph Stanley's memorabilia to tell his story.  By using a pair of headphones handed to us at the desk, we were able to plug into a number of stations where we listened to Dr. Ralph's own explanations of various parts of his life while looking at some of the vast array of pictures, posters, festival brochures, record sleeves, clothing, and awards that have figured in his life.  High definition television screens show films of Carter and Ralph Stanley early in their performing career and a number of materials put the Stanley story into context with reference to other local and regional musicians whose names have also become well known.  People like Jim and Jesse McReynolds, Wade Mainer, The Carter Family, Ricky Skaggs and Keith Whitley, and many more figured in Stanley's life as well as the history of the region's music.  Even for people familiar with his story or who have read his recently published and widely praised autobiography, visiting this museum fills in holes and fills up ones understanding of the man and the context from which he comes.  The museum is worth the time spent there and the effort to get there.

The Museum also has lodging facilities where you can arrange to stay. 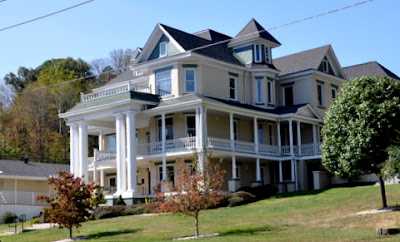 The Breaks Interstate Park
With a few hours left for our Sunday outing, we decided to continue up the road to The Breaks Interstate Park, on the border between Virginian and Kentucky.  It's clearly Daniel Boone country, as the sign just past the entrance indicates.  The park's 1000 foot deep gorge was formed over millions of years by the Russell Fork River. During October water upstream in a reservoir is released, and the gorge becomes a mecca for kayakers wishing to challenge Class V rapids. As we drove up, we drove past a number of mines and saw a long train running uphill to begin filling its cars with coal for transportation to, I presume, the nearby power plants of the TVA or Duke Power.  Once in the park, the spirit of Daniel Boone pervades, as he is credited with being the first white man to see the gorge.  Boone, who partially supported himself by collecting Ginseng, may also have collected the root at this site.  Here are some pictures of the park: 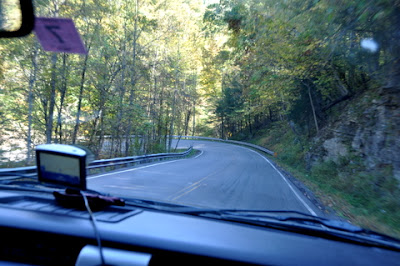 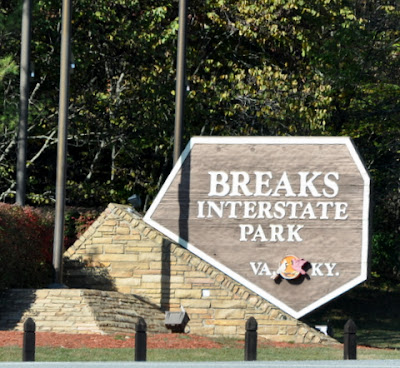 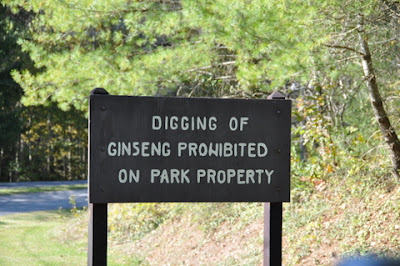 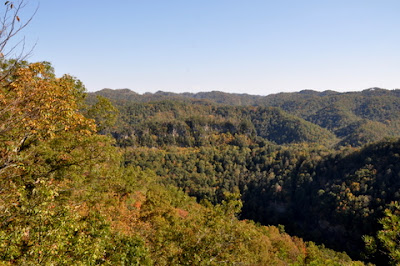 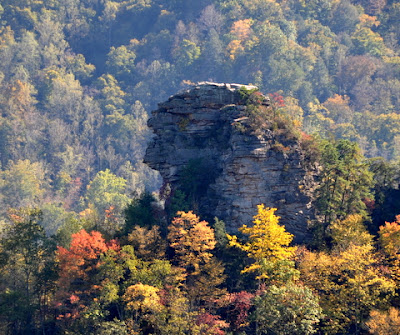 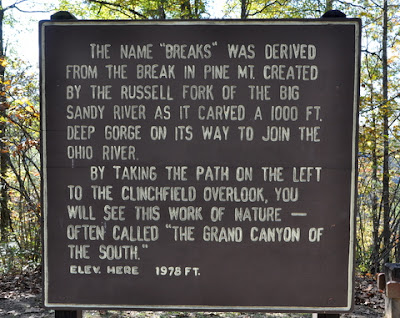 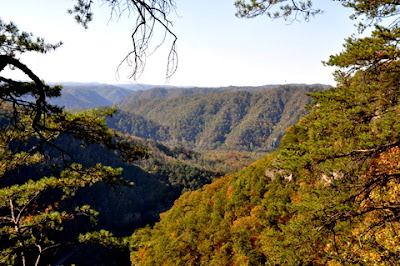 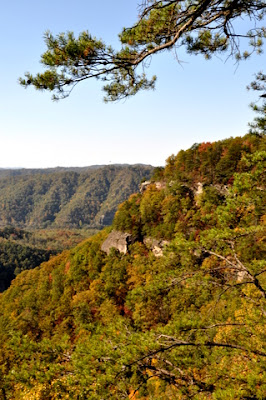 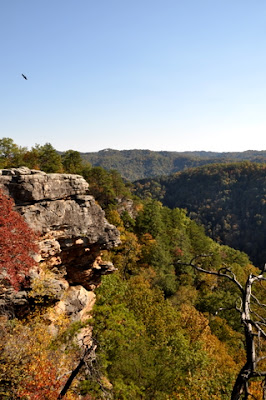 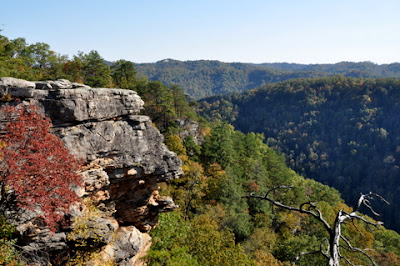 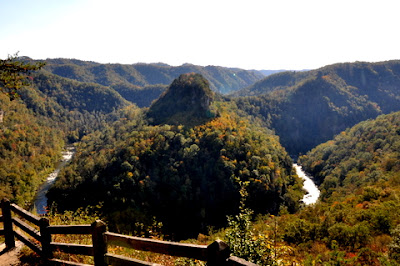 The amenities of The Breaks include a lodge with rooms, a large swimming pool, and a full-service campground.  Access is by a steep, winding access road that might challenge some drivers.  It sure is a beautiful place.
Posted by Ted Lehmann at 6:30 AM