Tamara Chalabi: Late for Tea at the Deer Palace - Review 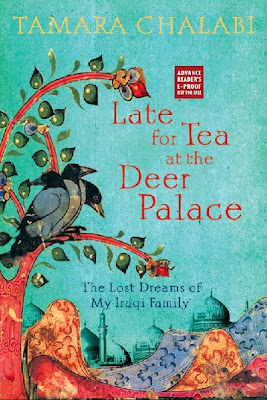 Tamara Chalabi, author of Late forTea at the Deer Palace: the Lost Dreams of My Iraqi Family, has written a thought-provoking and interesting cultural and poltical history of her family's ascendance to wealth and power in Iraq and their fall from influence as the winds of change swept through the middle east in the last decades of the twentieth and early twenty-first centuries. I was originally attracted to this volume because I recognized Chalabi as the daughter of Ahmed Chalabi, the often shadowy political figure who deeply influenced American neo-conservatives to clamor for war against Islamic terrorism in general and the dictator Saddam Hussein in particular. Through the influence of Vice-President Dick Cheney and neo-con ideologues like Paul Wolfowitz, Lewis “Scooter” Libby, and Richard Pearle, President George W. Bush was influenced to invade Iraq under the guise of seeking and destroying non-existent weapons of mass destruction, involving the U.S. in ten years of costly human and financial losses, which now continue in Afghanistan. Fortunately, Late for Tea at the Deer Palace (Harper Perennial, 2011, 414 pp in trade paperback, $15.99) turns out to be much more than an apologetic for Chalabi and his misdeeds.
The Chalabi family rose to wealth and influence as the territory once known as Mesopotamia, the cradle of world civilization and one of the major centers of Islam's growth and development between the Tigris and Euphrates rivers, emerged to become Iraq after the chaos of World War I. Unfortunately, as a part of the Ottoman Empire for the previous 400 years, the region had, as a Turkish province, been at least nominally allied with Germany during the war. During the Versailles conference of 1919, the middle east was carved up between the victorious nations, as Great Britain and France received most of the spoils creating small countries out of tribal areas rich with the petroleum the world had become addicted to. Iraq, with its cultural capital, the ancient city of Baghdad, and numerous Shi'a shrines within its borders despite a Sunni majority as well as other, smaller, groups like the Kurds and nomadic Bedouin tribes found it difficult to form a unified national identity and government. Within this context, the Chalabi family thrived for several generations before declining as pan-Arab nationalism swept the middle east creating the havoc and danger we continue to live with. Sadly, much of this story depends on the selfishness of the large European powers and the U.S. as they sought to manipulate these created countries to control the huge petroleum reserves found there for their own needs.
Tamara Chalabi, a Harvard trained historian born in 1973, is descended from nineteenth century Ali Chalabi, who, as an influential and wealthy Muslim held court much as, without its criminal implications, Don Vito Corleone from The Godfather did, resolving disputes and granting favors to the large numbers of people seeking his intervention. In traditional Muslim society, this role was respected and carried great weight. The Chalabi family rose to its greatest wealth and influence during the period between the end of World War I and the emergence of pan-Arab nationalism promulgated by Gamel Abdul Nasser with his rise to power in Egypt during the 1950's. Much of their power came from supporting the imported King Faisal, a Hashemite noble and deposed king of Syria who was installed by the British as King of Iraq. Faisal, a progressive for the period, was committed to eliminating the separations between Shi'a and Sunni Muslims as well as reconciling with the nomadic tribes of the region and the Jewish move to establish a homeland in Palestine. The Chalabi, as an influential Shi'a family, exercised great influence and strove to increase their wealth through establishment of large farming operations, banking, and the law.
Tamara Chalabi 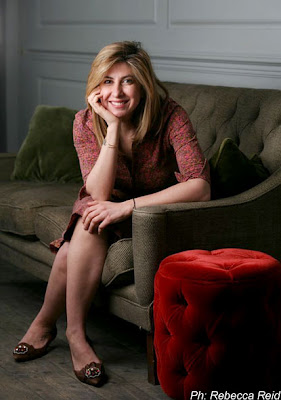 But the rise and then destruction of modern Iraq is only part of the story here, always important, but sharing equally with the domestic story of the Chalabi family as representative of a kind of life that existed during the period. Tamara Chalabi is the grand-daughter of Abdul Hadi and his wife Bibi, whose lives spanned much of this period. Hadi expanded the family influence through smart acquisition of large farms and association with British cotton dealer. He amassed great wealth, allowing his sons to become educated and assume leadership in banking and the law. His wife, Bibi, was chosen for him through the traditional Islamic fashion of formal searches and arranged marriages. She became a powerful social arbiter in her circle, although much as her grand-daughter seeks to disguise it, seems to have been an unpleasantly outspoken and querulous person for much of her life. Nevertheless, she and Hadi remained married for nearly seventy years. Most notable among their nine children were Rhushi (born 1919) who expanded his father's business interests to international proportions, the blind Hassan (1921) who studied law and became influential in legal and political matters, and Ahmed (1944) who was educated in mathematics at MIT and earned his Ph.D at the University of Chicago and became a political operative opposing the vicious dictator Saddam Hussein, whose regime eventually led to the destruction of Iraq.
The book contains intimate pictures of life within the closed family quarters of one wealthy Iraqi family. In a world where women, until quite recently, could only appear in public completely covered by an abaya, the pictures of women at tea, the importance of eating fine food together as a family while providing food and hospitality for all who came to the door, and the complex web of inter-related family and political influence help explain to western minds the often difficult to understand cultural and social world of the middle east. Chalabi very clearly explains the religious and cultural differences between Shi'a and Sunni branches of Islam. By emphasizing the importance of family (clan) loyalty and domestic (at home) politics, she helps the western reader gain an understanding of Arab Muslim culture. She depicts the Shi'a as analogous to right wing U.S. Protestant fundamentalists in their resistance to government and narrow interpretation of the law (Sharia). The Chalabi family both enjoyed huge wealth and practiced incredible generosity to those whom they favored. People were taken into their family as servants (sometimes even former slaves) and maintained for generations. The family is depicted as unusually progressive, especially as Shi'a, interested in education, commerce, contemporary innovation, and building a modern Iraq free from foreign (British) control while still benefiting from their association with the foreign influences.
As the political situation in Iraq changes with the advent of Pan-Arabism and the fall of King Faisal in 1958, the fortunes of the Chalabi family fall, too. They are forced to move, first to London, where they find themselves to be aliens in a land where they feel neither welcome nor comfortable. This is made worse by Hadi's arranging accommodations in an apartment complex his son Rushdi had urged him to purchase years before and which would have assured his wealth under the new and challenging circumstances. For the remainder of Hadi's life, Rushdi never allowed him to forget this mistake. Bibi ages and becomes more difficult as her children and grand-children become increasingly westernized and modern, while not understanding nor approving the changes she sees. The idyllic life of an influential family is replaced by the struggle to hold themselves together and re-create their life under bearable but difficult conditions. They move from London, to Lebanon, to Jordan, each time having to learn new ways of surviving.
Tamara Chalabi has obviously interviewed members of her family and lovingly recreates the world they lived in, at least in their own memories as well as conducted large amounts of un-credited reasearch. The contrast between the closely knit, loving, wealthy family and the nation torn asunder by sectarian, political, and economic forces creates a remarkable picture while clarifying much that most Americans find mysterious about life in the Middle East and Islam. In doing this, Chalabi provides a highly readable and very informative volume. The sections where she seeks to justify some of her father's later misdeeds are understandable and not very persuasive. Otherwise, this is an excellent, readable, and worthwhile book.
Latefor Read at the Deer Palace: The Lost Dreams of My Iraqi Family by Tamara Chalabi is published by Harper.Perennial and has a retail price of $15.99 in trade paperback. It was provided to me by the publisher through TLC BookTours. You can order it directly through my blog by clicking on any of the links or the book carousel. Thanks.