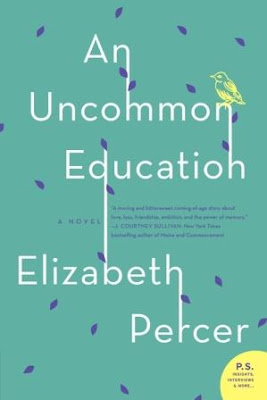 Elizabeth Percer has writen a glowingly rich first novel which has been undeservedly labeled a “coming of age” story, while in an adult fashion examining the issues confronting so many whose brains and spunk place them in locations they're neither prepared nor equipped for. In An Uncommon Education (Harper Perrenial, 2013, 342 pgs, $14.99 in trade paperback) Percer presents Naomi Feinstein, the lonely daughter of an Isreali born photo repair specialist father and a converted Irish Catholic mother living in Boston. Naomi is both blessed and cursed by the central metaphor of her existence, the inability to forget. She rememebers in great detail what she reads, sees, and experiences while recounting it in lonely splendor and lovely poetic language.

Born into a lower middle class world of quiet and lonliness, Naomi is observant and aware of all that goes on around her without understanding much of it. She remembers, but she doesn't know. Her father's photographic restoration business becomes a metaphor for her ability to freeze memory and experience. A formative experience for her revolves around the Kennedy family home where her father nearly dies of a heart attack while she discovers under a piano in the parlor some papers by the later lobotomized Kennedy daughter Rosemary along with a signed photo of Amelia Ehrhart with the cryptic note on it, “She flew.” Doted on by her father, who understands her memory and encourages her desire to become a doctor by giving her a copy of Grey's Anatomy when she's nine years old and separated from her mother by the depth or her seemingly constant depression, Naomi grows up lonely and observant until she meets next door neighbor Teddy. The two become friends and nearly lovers before he moves to New Jersey where he is eventually committed to a mental hospital. Naomi, always more an observer than a participant in her own life, receives a generous scholarship and enrolls at Wellesley College, perhaps the most prestigious women's college left in America, and begins to know herself.

In the heated intellectual and social environment of Wellesley, a place where expectations are that all students will become the intellectual and social elite of the country, Naomi soon comes to know Jun, the brilliant daughter of a Japanese industrialist, and a group of arty and iconoclastic women who are members of the Shakespeare Society, one of Wellesley's oldest, most pretigious, and most quirky student organizations. Naomi's commitment to medicine wanes as her awareness of the lives and loves of those around her becomes increasingly heightened and engaged. Meanwhile, only a couple of marvelous twists in her life shake her out of the disengaged posture she has learned to maintain despite her desire to save everyone else. Naomi becomes increasingly attractive as she achieves a greater degree of agency in her own life. This book proved itself to be strongly engaging to me as my concern for Naomi and understanding of the world in which she lives grew and broadened. Structurally, the narrative may seem to become more confusing as Naomi encounters new people and ideas in her life, however, the structure reflects the increasing chaos she perceives. Percer's ability to portray Naomi's increasing awareness and command of her world is one of the real strengths of this novel. 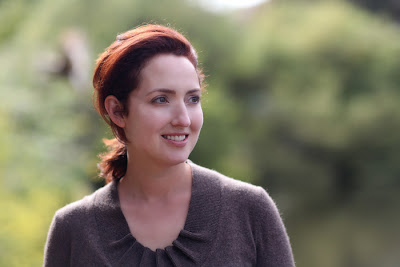 Elizabeth Percer attended Wellesley College where she majored in English and holds a PhD in art education from Stanford. She has been nominated three times for the Pushcart Prize, a short story award, as well as honored by the Dorothy Sargent Rosenberg Foundation. She has worked with the National Writing Project at UC Berkley, and describes herself as a recovering academic. She lives with her husband and three children in California.

An Uncommon Education by Elizabeth Percer (Harper Perrenial, 2013, 342 pages, $14.99) is more than a coming of age novel. Rather, it is the involving account of a young woman's journey toward engagement and fulfillment in a difficult and challenging world. While most of the major characters are women, it extends beyond being a women's novel and emerges as a complex, complete character study. I look forward to seeing more work of Elizabeth Percer's imagination. The book was provided to me by the publisher through TLC Book Tours.