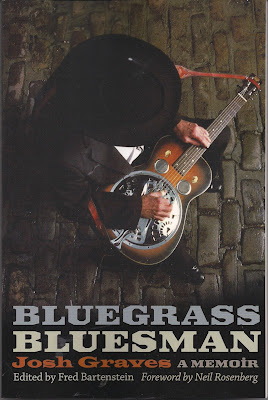 Bluegrass Bluesman: A Memoir edited by Fred Bartenstein with an introduction by Neil Rosenberg, (University of Illinois Press, 2012, 133 pages, $21.95) is a slim volume filled with Uncle Josh's wit, wisdom, and life experience. Bartenstein's work as an editor is reminiscent of Studds Terkel as he lets Josh Graves speak for himself by carefully stitching together three major interviews done over the years into a thought provoking and coherant whole. He allows Graves to maintain a clear, distinctive, and authentic voice while not sounding too “hillbilly” or regional. The result is a must read volume about the musician, the man, the innovator, and the vast influence of Josh Graves in bluegrass music and beyond. He was said to have the same kind of influence on the Dobro that Earl Scruggs had on the banjo.

Josh Graves was born Burkett Graves in Tellico Plains, TN in September 1927. He grew up in the proud mountain poverty and simplicity that nurtured so many of the bluegrass pioneers, falling in love with music as a child and quitting high school after one year to leave home and hit the road as a professional musician. He was influenced by local musicians as well as the country music he heard on a battery powered radio in his home. Another important influence in his music was a black farmer who lived on the property adjoining his family's who played blues on a slide Hawaian guitar. Later he was also influenced by other blues musicians like Lightnin' Hopkins. His professional peers and musical heirs all speak about the bluesy quality to his Dobro play.

Josh Graves joined Flatt & Scruggs seven years after they left Bill Monroe in 1948 to form their own band primarily as a bass player but soon became featured on the Dobro. His move to Dobro was based largely on their desire to establish a distinctive sound from that of Bill Monroe & the Bluegrass Boys. Throughout the book, Graves emphasizes the importance of creating one's own sound, or not copying the greats. He talks about the fallow quality that grows from slavishly copying a person's playing or his renditions. He credits Earl Scruggs with teaching him to use rolls as a component of his Dobro style as well as teaching him much about performance and professional discipline and the business end of music. Nevertheless, he consistently emphasizes the importance for a musician of creating an idiosyncratic style of his own. He generously acknowledges the musicians who took time to give him pointers and to help him develop. According to the many Dobro masters who contributed to a chapter of reminiscences about Uncle Josh, he was equally generous with his support and help for younger musicians, frequently handing them one of his fabled instruments to play and then listening helpfully and supportively to their work.

Graves married his wife Evylyn when she was fifteen and he was already a touring musician at age seventeen. They had four children, each of whom became musicans, and Josh was a dedicated husband and father despite spending huge amounts of time on the road as a traveling musicians with bands or as a solo artists. He also worked a great deal as a session musician.

Graves was a true innovator on his instrument. He says, though, that “...you can't go back to the original thing” but that it's crucial for musicians to know and study the foundations upon which their music is based. He also decries the prevalence of jealousy in bluegrass saying, “One (group) don't want to see the other get ahead.” He emphasizes the need to change with the times, though seems, also, to say that the contemporary music he was hearing toward the end of his life lacked the heart found when he was doing his early touring. Perhaps the lesson to learn is that only the very best of any era will survive to entertain and influence new musicians and bands coming along. Josh Graves always gave his time and energy to helping that to happen. 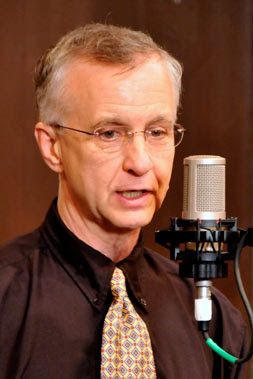 Fred Bartenstein is President & CEO of Bartenstein & Associates, an organizational development firm headquartered in Yellow Springs, Ohio. He is a 1974 cum laude graduate of Harvard College, where he was a member of Phi Beta Kappa. Growing up in bluegrass, Fred Bartenstein had the privilege of knowing and working with virtually all of the music's first generation. The editor of Muleskinner News from 1969-1974, he has also been a broadcaster, musician, festival MC and talent director, composer, record producer, compiler of the first bluegrass market research, founder of a regional association, and a lifelong fan. He has written many of the oral histories of musicians to be found in the International Bluegrass Music Museum. Modestly billing himself as editor of Bluegrass Bluesman, he has stepped into the background in a project where his work is what turns this from an incoherant collection of memories into an interesting and valuable bluegrass portrain and history.

While Bluegrass Bluesman by Josh Graves is a slender volume, it is filled with useful thoughts about the origins and deveolopment of bluegrass music. Beyond that, Graves' reflections on life, family, honesty, friendship, the road, drinking drugs, and the road life are both forward looking and representative of his background and the times. The personalities of Lester Flatt, Earl Scruggs, Bill Monroe others are sharply delineated. Graves takes no prisoners while still being generous and thoughtful. A concluding chapter contains testimony by most of the Dobro greats of the last couple of bluegrass generations. Their appreciations of Josh Graves for his influence on them and the help he gave them as they came up brought tears to my eyes. This book belongs in the library of every person interested in bluegrass music as a fan or performer, amateur or professional.

Bluegrass Bluesman by Josh Graves was magnificently edited by Fred Bartenstein. It is published by the University of Illinois Press (2012, 133 pages, $21.95) in trade paperback and is available from the usual sources in print and electronic versions. I bought the book.