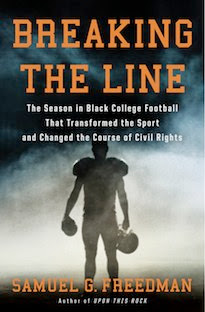 Breaking the Line: The Season inBlack College Football That Transformed the Sport and Changed theCourse of Civil Rights by Samuel G. Freedman (Simon & Schuster, 2013, 336 Pages, $28.00) in a gripping tale of a season consumed with both the strife of the surging civil rights movement during the mid-sixties and the rivalry for supremacy in black college football between two of the greatest, and least recognized, coaches in football history. In telling the stories of Eddie Robinson, head coach of Grambling College in Lincoln Parish , LA and Jake Gaither, who coached at Florida A&M University in Tallahassee, Florida, Freedman tells the story of the changes in American society that led to the breaking of the barriers keeping black Americans from finding their places in American sport, and in the larger realm of American life. While, we are now 150 years beyond the emancipation proclamation, the story of race relations and black advancement is still being told, but this crucial year in the history of black progress, explored within the context of two coaches whose approaches to playing the game of football and the game of life in a rapidly changing racial environment were coming under criticism, helps readers understand the magnitude of the change and the difficulty of achieving it in the strongest and most persuasive narrative I've read. 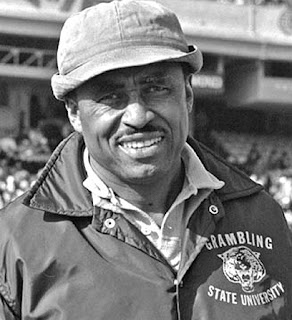 Eddie Robinson, born in Lousiana in 1919, and educated largely in the segregated schools of the time, except for earning a Master's desgree at Iowa State University, coached at Grambling University for 57 years, ending his career with the second most wins of any football coach in history and as a member of the College Football Hall of Fame. But Robinson's fame and recognition came late in his career. He first took his position at Grambling in 1941, when black colleges received little support from their state legislatures and the struggle to send children to higher education and possible advancement was achieved in an environment of exceptional resistance and outright danger. Similarly, Jake Gaither, born in 1903 in Dayton, TN, was educated at Knoxville College and earned a Master's degree at Ohio State. He became head coach at Florida A&M University in 1938, where he won 204 games and six Black College National Championships during a career in which he had to overcome illness and a life threatening brain tumor as well as the exigencies of the deeply segregated state of Florida to amass an amazingly successful career as a football coach. He, too, is a member of the College Football Hall of Fame. The careers of these two amazingly successful coaches culminated in the Orange Blossom Classic, held in Miami, Florida on December 2, 1967 in an exciting, and suspenseful game, which Freedman recounts in nearly play-by-play detail. Each of these coaches was responsible for sending dozens of black players in the AFL and NFL. Robinson's player Tank Younger was the first full time black player in the NFL and James Harris became the first black man to start at quarterback in the NFL. This book is the story of these two men, their intense and interlocked rivalry. 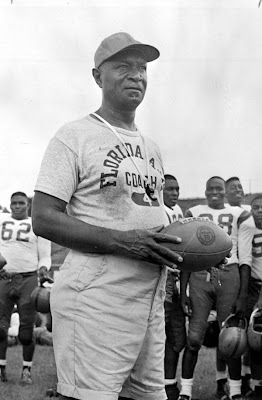 It is also, however, the story of the emergence of black athletes in a world where segregation in the deep south was still widely practiced and embedded in the legal and social structure of the times. It was a time when traveling athletic teams couldn't find a place to eat along the road, there were no rest rooms they were allowed to use, and sleeping accommodations were often the floors of black churches or college classrooms. The students who enrolled in these programs were often allowed by their parents to leave home to attend because they expected their children to receive an education which would fit them for advancement in a society bent on keeping them “in their place.” The struggle that college presidents and football coaches had to educate their students and develop a reputation for their athletic programs are detailed, often both heart breaking and inspiring. Although both Robinson and Gaither were no longer alive when Freedman began his book, it is filled with the reminiscences of the players, many of whom went on to success in professional sports, the ministry, education, and business. The backgrounds and careers of the two quarterbacks in the Orange Blossom Classic, James Harris, relatively unknown except to football historians who view him as football's Jackie Robinson, and Ken Riley the able FAMU quarterback, help develop the book's focus on advancement, leadership, and education as each was prepared and developed by his respective coach.

Both coaches were deeply respected in the coaching community as teachers and leadership among their coaching peers as clinicians worthy of breaking racial barriers to learn from and teach with. Paul “Bear” Bryant of the University of Alabama and Woody Hayes of Ohio State University both taught in and attended Gaither's and Robinson's coaching clinics. However, both coaches, whose careers began around 1940, were strict disciplinarians whose games depending on endless repetition, speed, and discipline. They believed in the ground attack and brutal, tough defense. Yet each was wise enough to see the coming changes in the games and develop innovations leading to game winning passing attacks as the rules changed and the game developed.

Parallel to the story of developing football players as athletes and as men, runs the story of doing so in an environment fraught with challenge and often danger. The days of the lynchings and shootings to enforce white supremacy in the south were far from over. The legal structure of segregation was still firmly in place, despite Brown v. Board in 1954 and the voting rights act in 1965. Florida Schools were still firmly segregated well into the sixties, as were those in Louisiana. The first football game in which a black school played a white school in Florida was not held until 1968. The presidents of both these institutions and their football coaches were largely responsible for building institutions which gradually received some support, largely as a way for states to argue that integrating the great state universities was unnecessary. By 1967, with the winds of change blowing hard, and activism in the faces of men like Stokely Carmichael, H. Rap Brown, and the Student Non-Violent Coordinating Committee (SNCC) were inspiring students to challenge their school administrations, the coaches and administrators were beginning to be criticized for their accommodationist approaches to building their schools and athletic programs. The rise of activism led to student demonstrations on campus, and, at Grambling, to a student boycott and to charges that President Ralph Waldo Emerson Jones was an Uncle Tom. By his deft and thorough placing of these events into an historical context, Freedman emphasizes the schools' accomplishments rather than their failures, taking much, but certainly not all, of the blame off the shoulders of these leaders of the forties and fifties by extolling both their courage and guile. 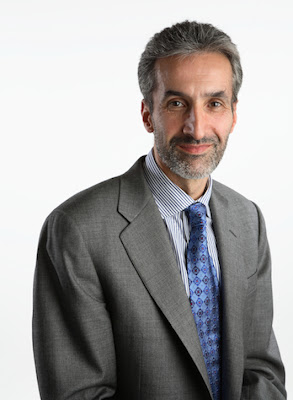 Samuel G. Freedman is a columnist for The New York Times and a professor at the Columbia University Graduate School of Journalism. He is the author of six acclaimed books, four of which have been New York Times Notable Books of the Year. Freedman also has written frequently for USA TODAY, New York magazine, Rolling Stone, The Jerusalem Post, Tablet, The Forward, and Salon.com. He lives in Manhattan with his fiance and his children. Because he is not primarily a sports writer, this narrative successfully negotiates the territory between sport and social history, while offering exciting and detailed descriptions of sporting events and coaching prowess.

Breaking the Line: The Season inBlack College Football That Transformed the Sport and Changed theCourse of Civil Rights by Samuel G. Freedman (Simon & Schuster, 2013, 336 Pages, $28.00) details an important period in American social history by focusing on an exciting football rivalry and a period which actually changed the course of American racial progress. The book is carefully researched and annotated. It is written in a descriptive language which uses detail and evidence to support its assertions and conclusions. This is an important and enlightening volume for football fans and social historians, released just in time for the opening of the football season. The book was provided to me by the publisher as an electronic galley through Edelweiss: Above the Treeline. I read it on my Kindle.