The Steep Canyon Rangers will host The Mountain Song Festival at the Brevard Music Center in Brevard, NC on September 13 and 14 in the spectacular Whittington-Pfohl Auditorium, an 1800 seat open-sided auditorium featuring comfortable seating and superb sound characteristics. The seventh annual festival features a superb lineup of bluegrass and bluegrass related music selected to please the ears of music fans across a series of musical genres. 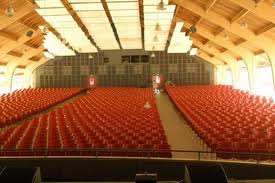 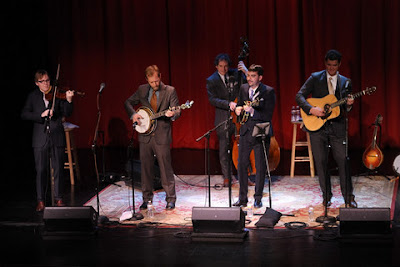 The Steep Canyon Rangers all now live in or near Brevard and, except for fiddler Nicky Sanders, are the same band which came together about a decade ago as students at the University of North Carolina. Their national reputation has grown hugely since they've become associated with comedian, writer, actor, musician Steve Martin, often leading people to forget that they're much more than a backup band.  It's been a great deal of fun to watch this group grow in maturity, skill, and appeal as they've created their own sound and much of their own music. The versatile Nicky Sanders on fiddle adds his wonderful command of the fiddle (It's bluegrass or I'd have to call it violin. After all, Nicky's a really fine violinist who plays bluegrass.) Altogether, the band has sharpened its image, refined its sound, and created one of the best bands in the country. As hosts of their own event here in Brevard, they're at the height of their powers. 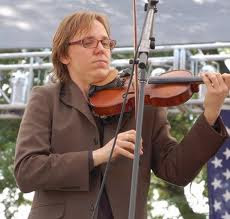 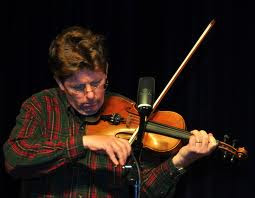 Since his days with Hot Rize, Tim O'Brien has had a legendary career as a band man and as a solo artist singing and playing with his unique style and quality. Whether he's with a band of his own, performing as a duo with his sister Mollie or with frequent performing partner Darrell Scott, or as we've seen at Merlefest, holding a crowd in his hands for more than an hour in solo performance in the rain, Tim O'Brien is one of the best. He's currently touring in support of album with Mollie and her partner Rich Moore. The trio can be counted on for a riveting performance across the spectrum of Americana music. 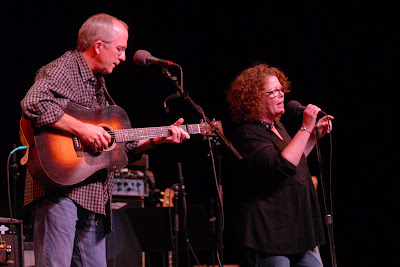 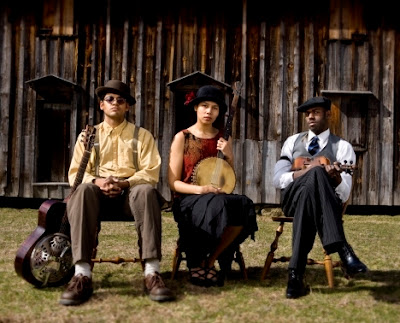 The Carolina Chocolate Drops have filled a void in bluegrass by introducing audiences to one of the often ignored antecedents to bluegrass music, black string band music. As their web site points out, this band from the Piedmont region of central North Carolina. they have sought to interpret the sounds and contribution of black string band music to the world of American music, particularly bluegrass as we know it. Always entertaining and humorous, CCD offers a deeply researched and thoughtfully conceived performance which teaches as it entertains. 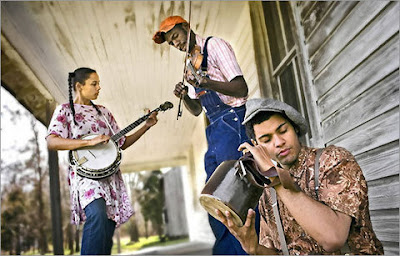 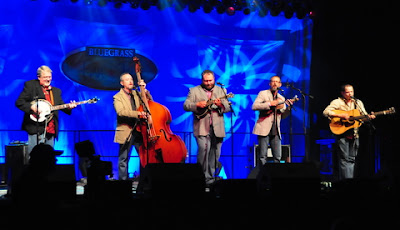 Balsam Range has sprung from the hills and hollers of nearby Haywood County to take the bluegrass world by storm over the past several years. Entirely contemporary and completely traditional, most of their music is written from within the band or for them. They are each virtuoso individual performers who meld together for a band sound ranging from haunting ballads, through driving bluegrass tunes, to soulful gospel singing which is fully their own. Balsam Range has been nominated for seven IBMA awards in 2013. 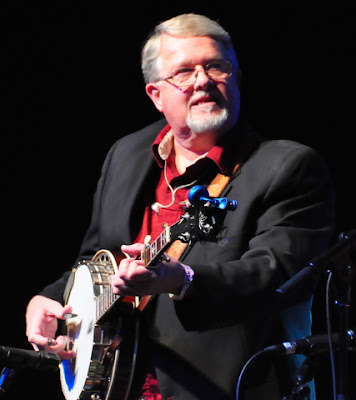 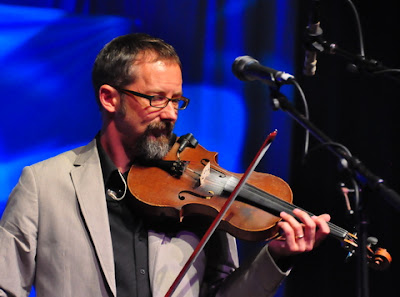 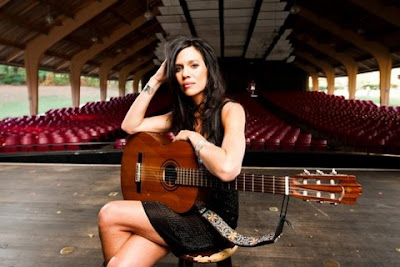 Shannon Whitworth has been wowing audiences since her days with the ground breaking band The Biscuit Burners. She is currently touring with her own band in support of her latest CD "High Tide."  While she may be seen as a "local," coming from Brevard, she has truly achieved international status.  We missed seeing her at the recent Barry Ford - Kim Cyr wedding in Connecticut, so this will be our first opportunity to see her perform with her own band. 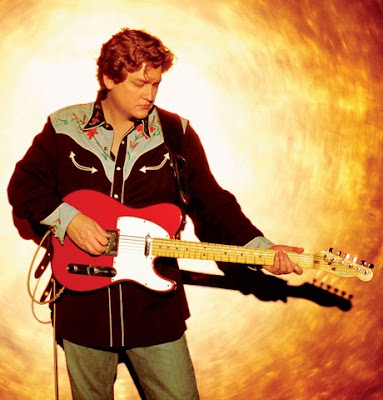 Every time we've seen Shawn Camp in performance has been an electrifying experience, whether he's playing acoustic or electric guitar, singing as a solo or with a band. Noted as a singer/songwriter in both country music and in bluegrass, his music and his on-stage presentation are indeed formidable. His album "Live at the Station Inn" is a staple in our collection. His band for this performance features Guthrie Trapp on Guitar, Jimmy Stuart on dobro, Chris Henry on mandolin, Larry Atamanuik drums, and Mike Bub on Bass. It's a world beater of a band to support a performer who generates enourmous excitement on the stage. From his driving Fireball to the heart-wrenching "That's Not the Grandpa That I Knew," he can be counted on. 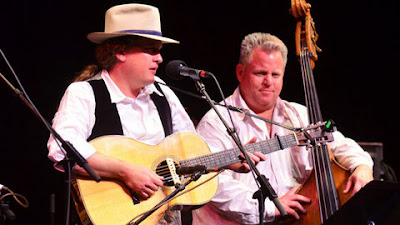 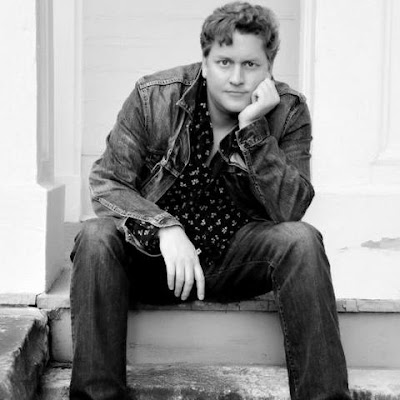 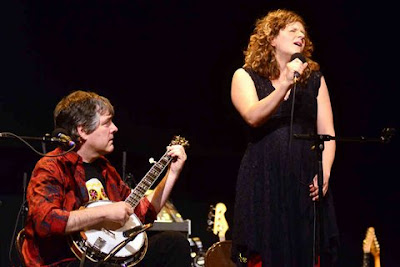 Bela Fleck has been both a stellar performer and an innovative force on the banjo since he arrived on the scene with The New Grass Revival in 1981. Since then, he has been at the forefront of many different bands and configurations, including Bela Fleck and the Flecktones, an innovative jazz group. He is widely considered to be the logical successor to Earl Scruggs as an innovator on the banjo, although he long since has left Scruggs style for his own unique vision.  Abigail Washburn has helped the open back banjo move from being a string band folk instrument to a subtle, nuanced tool to accompany her varied interests. It only seems natural that the two should form a musical and then personal partnership as they played together with the Sparrow Quartet, toured extensively in China where they played with traditional Chinese instrumentalists, and more. You can look for pleasant musical surprises when these two banjo stylists perform together 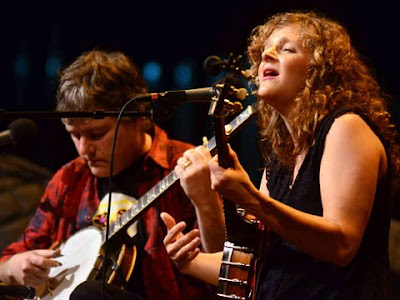 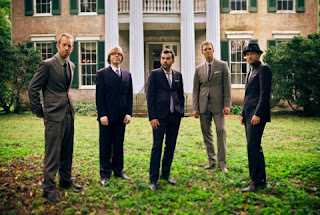 In addition to all their manifest skills, The Steeps are hosts of one of the finest and most affordable bluegrass cruises around. With wonderful bands along for the ride, this cruise is perhaps shorter than others, but its lineup can't be beat on land or sea. Featuring bands such as the David Grisman Folk Jazz Trio, Trampled by Turtles, The Carolina Chocolate Drops, The Gibson Brothers, Della Mae, Seldom Scene, The Kruger Brothers, and more, including, of course The Steeps, Mountain Song at Sea may provide the best bluegrass music at see. Be sure to check it out HERE.


Brevard  is a mountain resort town about thirty-five miles southwest of Asheville, NC. Boasting a range of delightful accommodations, quality restaurants, and varied shopping, Brevard provides a wonderful setting for a music festival and offers opportunities for stretching out the weekend surrounding The Mountain Song Festival.

Information about obtaining tickets may be found HERE.  And you can purchase tickets online HERE. Mountain Song Festival is benefit for the Boys & Girls Club of Transylvania County, NC.  Located on the beautiful campus of the Brevard Music Center,  every effort is made to make the festival adhere to environmentally sound principles.

Smoke free and in a covered pavilion sheltering the audience from the elements, Mountain Song Festival provides the best in bluegrass and Americana music from a range of performers, all of whom have roots or branches in bluegrass music. The two days promise a true musical extravaganza. See you there!