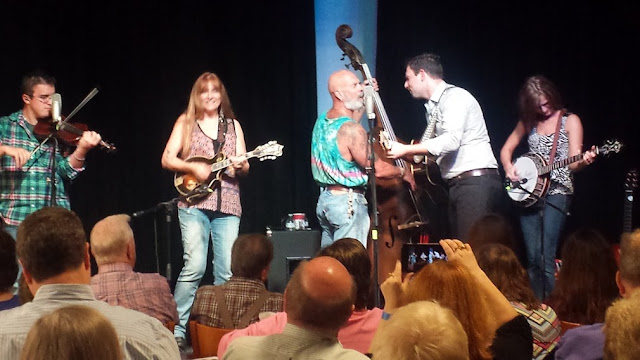 On Friday evening we drove over to Garner, NC to see the reunion show of Cherryholmes, at Lorraine's Coffeehouse & Music, a pleasant, comfortable venue serving up music most nights as well as coffee and light snacks. We arrived at the former pharmacy building that's been well re-purposed to discover that I had left my camera battery in its charger back at the trailer fifteen miles away. All the band pictures in the blog entry, except for the ones I found on Google and the coffee house website, were taken on my Samsung Galaxy G4, so please excuse them. 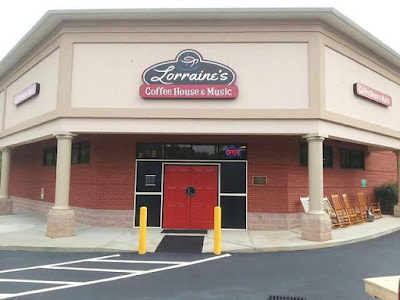 Lorraine Jordan at Her CoffeeHouse 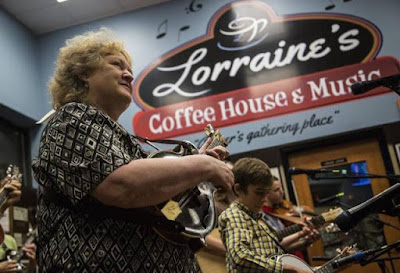 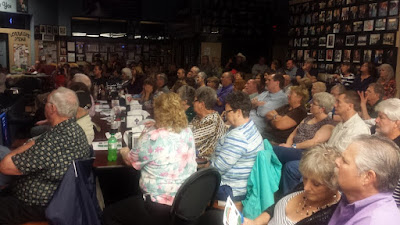 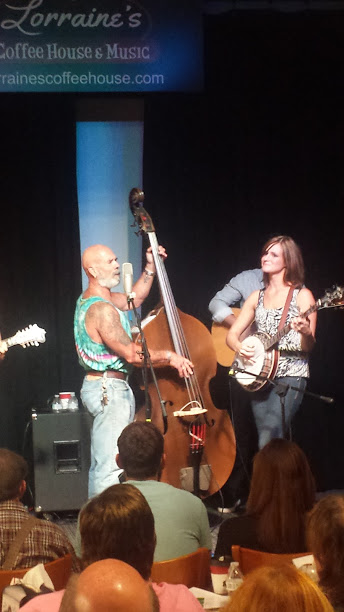 Cherryholmes story is uniquely bluegrass. Originally from California, the family lost a daughter, Sally Anna, in 1999. Looking for a way to heal and strengthen the shattered family, parents Sandy and Jere, after attending a bluegrass festival with the family, decided that making music together, having a jam, might bring the family closer together. They started playing instruments as part of their home-schooling effort. Within a year they had their first festival date in 2000 the band turned professional and started touring. They soon had attracted enough business to buy a small travel trailer, quickly replaced with a tour bus and finally relocating to Nashville, where they attracted the attention of Ricky Skaggs, who signed them to his label. In 2005, Cherryholmes was the first band to be nominated to be IBMA Emerging Artist and Entertainer in the first year, winning the top award. 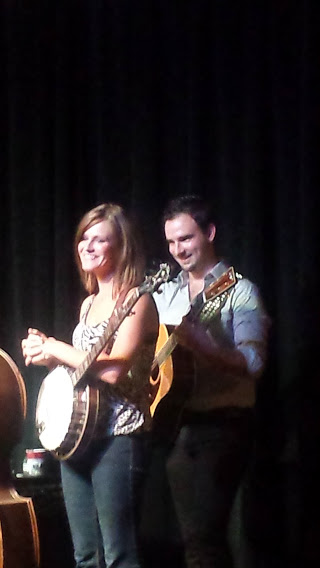 Cherryholmes was nominated for Grammy awards five times, and toured hard until 2011, performing all over the United States as well as in Asia and Europe with their high energy, eclectic performances and well crafted family show. During a chat I had with Sandy Cherryholmes at IBMA's Fan Fest in, probably, 2010 or 2011, she emphasized the family goal of using music, discipline, and love to first heal the family and then mold the youngsters into independent, fully-functioning adults. The culmination of this effort led to a family conference, after which Jere and Sandy retired, as the rest of the children (no longer children) followed their own directions. This has led Cia to Colorado, where she married Stetson Adkisson, with whom she performs as well as touring with fiddle guru Mark O'Connor's band. B.J. Cherryholmes plays fiddle with Dailey & Vincent. Molly, the youngest, after a period in Nashville where she followed her own alternative musical path, has recently joined Mountain Heart. Skip, who lives in Raleigh with his wife Stephanie Dilling Cherryholmes, has become a member of Sideline, a rising band led by former IIIrd Tyme Out emcee and banjo player Steve Dilling. It looks like the Cherryholmes plan is working out just fine.

Cherryholmes has been planning for over a year to perform at last weekend's Outer Banks Bluegrass Festival in Manteo, NC, which sadly was cancelled due to a tropical storm forcing the evacuation of Maneo Island. While B.J. and Molly both had Sunday obligations with their bands, the reunion event was moved to Lorraine's Coffeehouse in Garner with young Nathan Aldridge brilliantly filling in on fiddle. A sellout crowd assembled for this fine evening of Cherryholmes music together with a couple of songs by Stetson and Cia. 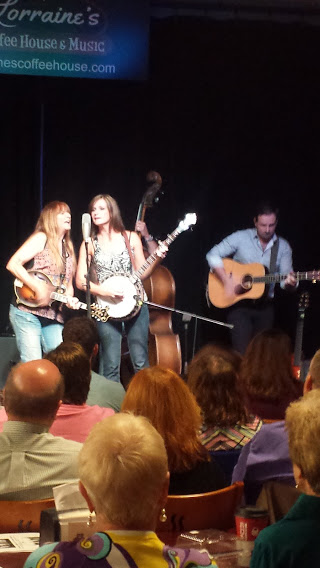 While Cherryholmes was only active on the blugrass scene for a brief ten years, their record of achievement and influence has been significant. Their music quickly evolved from traditional bluegrass focusing on classic covers to developing a lively style of song drawn from numerous sources, including their own writing, strongly influenced by a Celtic sound. Jere Cherryholmes tough-guy demeanor augmented by his singing both a stunning murder ballad and a humorous song about aging, contrasted sharply with the four active kids moving quickly and performing with virtuoso skill and intense, rapid picking. Cia remains a top banjo player and singer, accomplishing what few much more seasoned players can, picking and singing simultaneously. Their overall show demonstrated to the bluegrass community the importance of liveliness, movement and showmanship as a part of bluegrass. It was truly a delight to be reminded of this fine band's contributions and to look forward to the possibility of future reunion shows.

Cherryholmes - The Heat of the Morning - Video