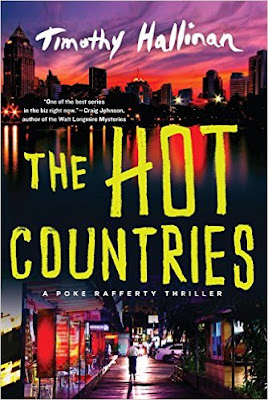 Timothy Hallinan is a prolific writer of Detective fiction/thrillers, currently writing two quite distinct series with vastly different settings and premises held together by little but his fine writing. This book, according to Hallinan, serves as the final volume of a trilogy within the Poke Rafferty series consisting, in order, of The Fear Artist, For the Dead and this volume The Hot Countries (Soho Press, 2015, 336 pages, $26.95/14.82). I've begun to think of each volume in this marvelous series as telling a focused part of the larger Poke story, which, in itself has become, for me, an extended novel in scope and vision.


TheHot Countries can be characterized as the story of the Expat Bar, one of Poke's hangouts populated by an odd assortment of former spies and military adventurers who've settled in Bangkok, each for their own reasons. This assorted group of men, each of whom has his own story, congregates for long days and nights of reminiscing, bragging, lying, drinking and lonliness. Poke drops into the Expat Bar from time-to-time to hear their stories and sometimes seek their insights into his own experiences living in Bangkok. In a sense, each man represents the ends which could possibly be Poke if he were to lose his own way as they have lost theirs. The book achieves a new tone, a variation in color, pace, and tone, which approaches the elegeic as it examines the lost lives of these men living in the past looking forward to not much.

Poke is primarily focused, as The Hot Countries opens, with his adopted daughter Miaow's upcoming performance as Julie in the play “New Town,” a thinly disguised version of Thornton Wilder's great play “Our Town,” whose tone, also, serves as an elegy for a world that sadly no longer exists except in our imaginations, much as life in the Expat Bar focuses on the past, too. The story of the production of the play stands in counterpoint to the drama growing out of events as they develop in the Expat Bar, where a mysterious, sinister character has appeared, expressing particular interest in Poke. It appears the this addition to the cast, Varney, desperately is seeking Treasure, the daughter of Murphy, the villain of The Fear Artist. Unlike other entries in the Poke Rafferty series, this book requires (or at least is vastly enhanced by) a knowledge of the events of the previous two books, especially The Fear Artist, in order to fully understand the horror that Varney's appearance and interest in Treasure evokes. Meanwhile, the story of the scarred lives and diminished capacity of the inhabitants of the Expat bar is examined and highlighted, creating an interesting picture, while diminishing the sense of heart-stopping drive often found in Hallinan novels. This characteristic emerges less as a problem for the novel than a change in tone demanded by the nature of the Expat Bar and its inhabitants. Poke engages these dissolute men to assist him in identifying, finding, and defeating Varney.

Tim Hallinan's writing, whether located in Bangkok, as in the Poke Rafferty series, or in Los Angeles, as it is in the Junior Bender series, is characterized by a palpable sense of place and the power of the family for good or ill. He writes lingering descriptive passages setting scenes with a strong sensual appeal, capturing the sights, sounds, and even the smells of often not so pleasant settings. His description of Boo (the former street kid now helping Father Bill (yet to be extensively profiled) as he leads Treasure, Miaow, and Challee through a dark, tight escape route to a hidee hole provides a touch of palpable fear and horror. Similarly, his trip inside the muddled mind of Expat Bar inhabitant, Wallace, as he seeks to reconstruct the long lost Yah, the love of his life, and Ernie, a former companion, now dead, captures loss and confusion with agonizing craft. Hallinan lingers, takes the time, to build his environment, enhancing the effectiveness of the tales. Meanwhile, there appear to be plenty of other ongoing characters to continue fueling his portrait of Bangkok and Poke Rafferty's eventful life there.

Hallinan currently belongs in a cohort of writers whose work expands his output beyond genre. His novels approach the quality of former genre writers like Dennis Lahane and George Pelecanos, each of whom began writing simple detective fiction which has expanded into serious novels. At present, Hallinan is creating two vastly interesting characters. I look forward to the next step, where he takes on a bigger subject in a single novel form to create a fine novel. In a thoughtful, and generous, note to me, Tim Hallinan described his first trip to Bankok, when, largely by accident, he discovered himself lodged in the midst of the city's famous sex trade district, only learn of the the basic honesty and generosity of many who earned their living there. Poke emerged as a way to tell the story of the city while capturing Hallinan's core issues of family, horror at child exploitation and public corruption, within a culture of beautiful, complex people. He has lived a portion of his life there since the early 1980's. 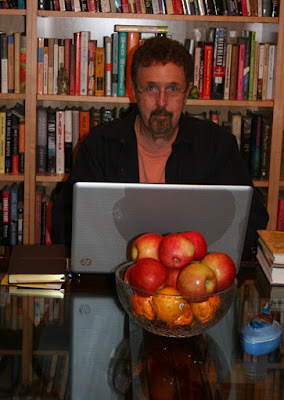 Timothy Hallinan's writing is characterized by an almost filmic quality of visual and other sensory stimulation. His writing depends on careful character building and seemingly authentic settings and situations. A reader may happily sink into the environment of Bangkok, with its take out food, it's foul weather, heat, humidity, and lurid lusciousness each time a Hallinan book is opened. This quality apparently grows from his early professional experiences in advertising, public relations, with major artists in the film industry. Eventually, he chose to write novels rather than scripts, a great gift to readers.

The Hot Countries by Timothy Hallinan ( Soho Press, 2015, 336 pages, $26.95/14.82) follows travel writer Poke Rafferty's inter-related domestic and problem solving life as he seeks to eliminate the harm that might come to the child Treasure as a result of the destruction of Haskell Murphy in The Fear Artist. With left over material, including lots of cash, from the previous book, Hallinan feels the need to finish the story while developing the characters who inhabit the Expat Bar. The story goes into some dark places, literally and figurative, including the often confused mind of Wallace, one of its denizens. The tale takes its time before pulling together a series of loose strands into a satisfying and engrossing conclusion. Poke Rafferty still has plenty left in him to keep pulling Hallinan readers back to Bangkok as they also anticipate the next appearance of Junior Bender in Los Angeles. The book was supplied to me by the publisher as an electronic galley through Edelweiss, Above the Treeline. I read it on my Kindle app.
Posted by Ted Lehmann at 9:00 AM