We had scheduled ourselves to travel up to Ellenburg Deport for the Gibson Brothers North Country Christmas on Saturday, but when the weather became threatening we decided to head up there a day early to avoid the incoming storm. Since there was no room at the Inn, we decided to spend the night in nearby Plattsburgh, in order to have only a half hour drive to get up to Ellenburg instead  of the usual four hours or so. On a beautiful Friday afternoon we drove across Vermont through Ludlow, where the snowmakers were busy on Okemo Mountain, across Lake Champlain, and then up along the shores of the Lake and into Plattsburgh, where I had taught some courses a generation or so ago. After a pleasant supper at a nearby Thai restaurant, we bedded down just as the snow was picking up. When we awoke on Saturday morning, there were about six inches of new snow on the ground, and we knew we had made the right decision. Late in the morning we continued north towards Ellenburg Depot. 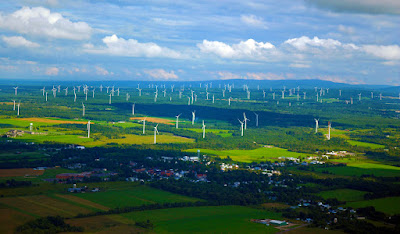 When the Gibson Brothers grew up in Northwestern Clinton County New York, their family dairy farm was merely a mile or two south of the Canadian border on the southern edge of the rocky Canadian shield, stretching north nearly to the North Pole. It was a hard-scrabble life where the boys learned farming, bluegrass and country music, and traditional values. They played and sang in church and soon were traveling to local bluegrass festivals in New York, New England, and Quebec. Their hard-working father Kelley must have breathed a sigh of relief when they enrolled in college instead of embracing the farm life. Their music continues to reflect these values, reaching out to the heart and mind. Meanwhile, farming has become diminished, with the largest crop nowadays being wind energy. They graduated form Northern Adirondack Central School, where their sister Erin Gibson LaClaire still teaches and their brother-in-law Matt is a corrections officer at nearby Clinton County State Prison.

After we checked in to the simple, but very comfortable Northern Adirondack Comfort (Mathews') Motel, we headed over to the sound check to set up. The Eric and Leigh Gibson were already hard at work with Mike Barber, his son Robert running sound, their son Kelley ready to sing with the band, and Sam Zucchini setting up his drums (incidentally, check out the Zucchini Brothers). 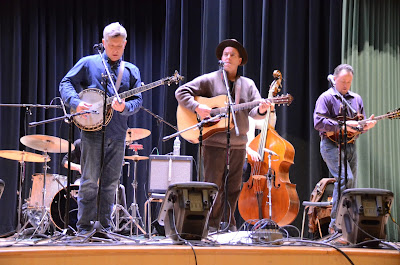 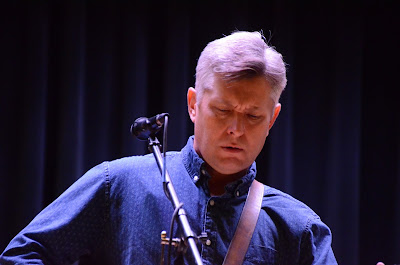 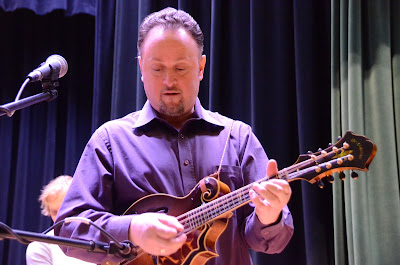 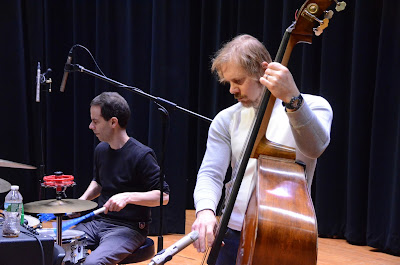 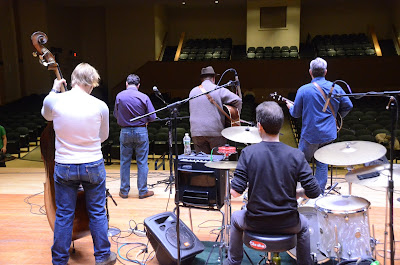 Erin Joins in to Practice One of Her Songs 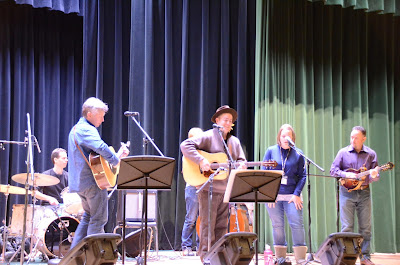 Rob Barber at the Board 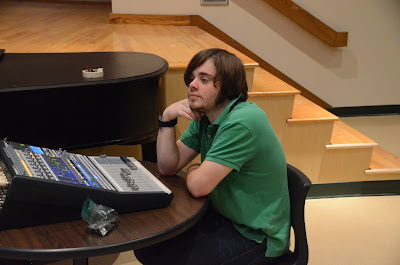 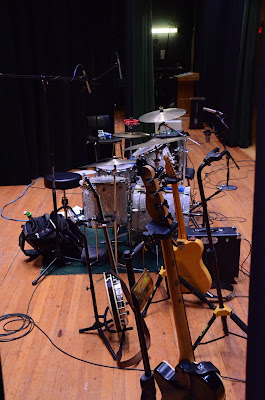 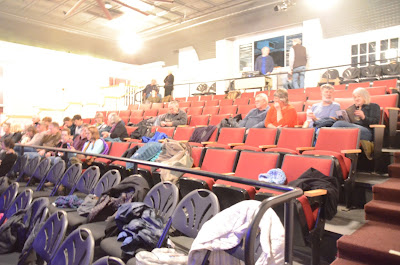 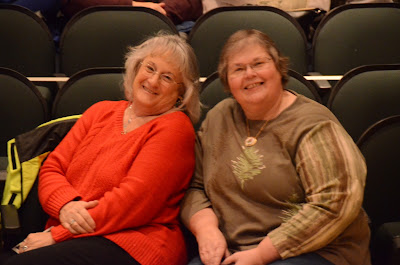 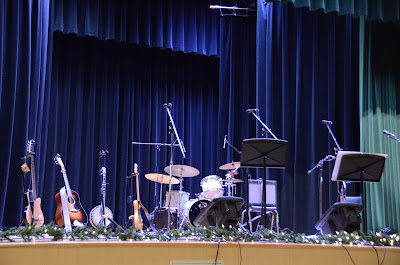 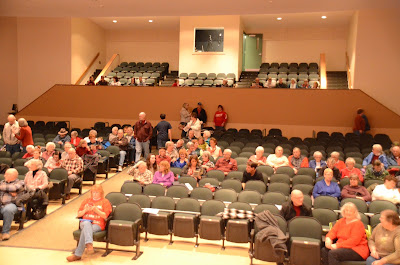 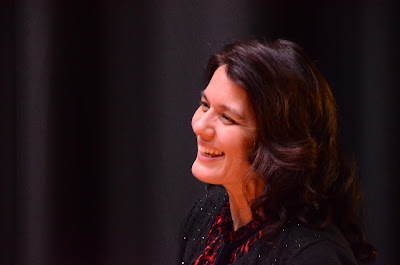 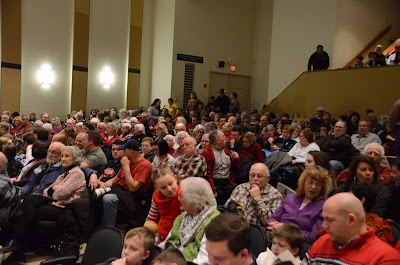 It's a home town crowd, or is it? Fans have come from Quebec (not so far), California, Ottowa (Canada's Capitol), but many of the people there are classmates of the boys, teachers with Erin, and friends from their youth. Many had stories to tell about the boys in school, singing at their wedding, or playing ball with them. Almost universally, local people call Eric & Leigh "the boys."

Erin Gibson LaClaire Sings
Away in a Manger

Eric and Leigh had their early musical experiences at Dick's Country Store Gun Shop and Music Oasis, located a few miles west of Ellenburg in the midst of a wind farm. Unless you needed to stop for some food supplies or ammunition for your hunting trip, you might just drive past the store, thinking, "What sort of music store could there be out here?" If you were really curious, you might stop for a look, and discover a large and varied music shop with hundred of instruments. Proprietor Dick Decosse was one of the boys' earliest teachers and mentors. 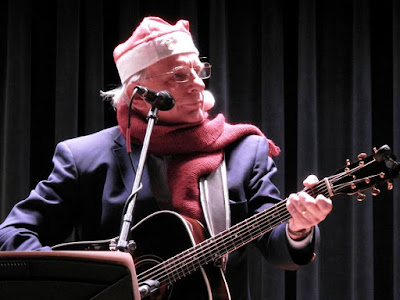 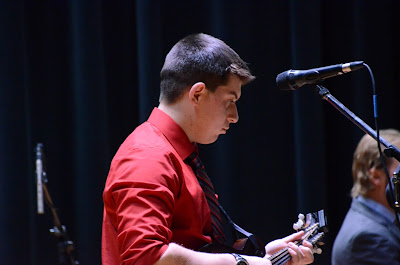 Kelley Gibson, often seen with his Dad, Eric, at nearby New York and New England festivals during the summer, is now a student at SUNY Plattsburgh, his Dad and his Uncle Leigh's Alma Mater, as well as a blooming song writer, multi-instrumental performer, and photographer. Recently, his photographic interests have concentrated on bird pictures. Here he performs a Ryan Horn song. 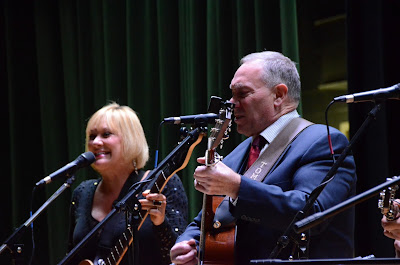 Julie Hogan and Tom Venne are a brother and sister who have performed together in the Plattsburgh area with their band Beartracks for years, while recently being seen more broadly in New England, Pensylvania, and Colorado. They also appear as The Clem Hawkins Revival Band, an electric, country band for whom Eric often plays the Telecaster when he's in town. You can see them at The Jenny Brook Bluegrass Festival in June entertaining the crowd after the Wednesday evening pot luck supper. When they're not performing, Julie is an elementary school guidance counselor and Tom a retired U.S. Customs Service officer.

Rockin' Around the Christmas Tree


The Gibson Brothers North Country Christmas Show has become a local institution. A portion of the proceeds go to support Northern Adirondack Central's Future Farmers of America (FFA) Club, and the show is always sold out. But, if you can get there and if you order your tickets early enough, you'll get the opportunity to gain insight into the character and quality of these two men whose band is one of the most in demand bluegrass bands in the country. It's filled with fine music, oozes Christmas Spirit, and exemplifies why, despite our burgeoning urban and suburban lifestyle, rural America still sends our country some of its best.

For those of you who haven't had enough of this show, I'll be writing my Wednesday column for No Depression from a different perspective, but including all different songs. Take a look at it!
Posted by Ted Lehmann at 4:58 PM