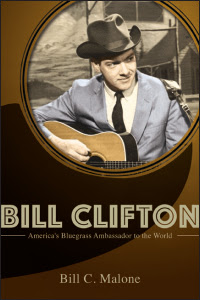 Bill Clifton: America's Bluegras Ambassador to the World by Bill C. Malone (University of Illinois Press, 2016, 184 pages, $19.75/995) is a scholarly, yet readable, biography of bluegrass and country music singer, collector, and entrepreneur Bill Clifton, whose long and productive career in the United States and around the World spread bluegrass, country, and folk music throughout Europe and to Japan during a long career that extended from the late forties through the early 21st century.

If you're a jammer or a singer of traditional bluegrass, mountain, or country music, Bill Clifton's life work of preserving and popularizing the roots of American rural music is familiar to you. You probably have used his songbook to learn songs and listened to his many recordings in one format or another. His long and productive career contributed volumes to the public awareness of country, mountain, and bluegrass music. Malone points out that when Clifton was first hearing country music, in the late forties and early fifties, radio didn't yet differentiate between its styles and formats. Thus he heard a range from Gene Autry through the early recorded country singers, to Bill Monroe, the Carter Family, and, probably, Jimmy Rodgers.

Clifton, born William August Marburg in 1931, was the son of a prominent and wealthy Baltimore family. His father was an investment banker and his mother was a member of a socially prominent Baltimore family. Clifton's youth seems to have been a concerted effort throughout adolescence to reject values and lifestyle of his family in order to follow his own inclinations to play country and old time music. An aborted and dangerous sojourn in Mexico ending in a serious automobile accident presents a fine example. He enjoyed a charmed life of wealth and comfort throughout the depression. Clifton enrolled at St. Paul's School in Concord, NH, but was expelled before graduating. His parents sent him to an exclusive school which alternated locations between the Adirondack Mountains and Florida. Similarly, his college career was spotty. He attended the University of Virginia, but appears not to have graduated, although his enlistment in the Marines during the Korean War did much to fuel his fascination with travel to foreign climes. 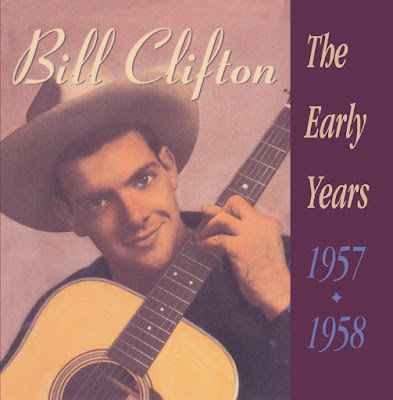 Clifton, however, was early attracted to country music and made much of his life's work around recording and collecting country and mountain music in an era when the lines between country, mountain, and bluegrass music were not so clearly drawn. For instance, early programs at places like Sunset Park in West Grove, PA and New River Ranch in Rising Sun, MD featured country music stars like Hank Williams, Roy Acuff and (later) Johnny Cash beside the early bluegrass greats Bill Monroe, Flatt & Scruggs, the Stanley Brothers, Jimmy Martin, and Jim & Jesse McReynolds. These venues drew a mixture of audience from local farmers, factory workers, folkies, hippies, and others, creating a unique cultural and social mixture to which Clifton was drawn, first as a fan and later as a performer and band leader. He is credited with the second one day bluegrass festival, held at Luray, VA in 1961.

Malone points out that Clifton's commitment to country music (hillbilly) probably came from a mixture of conviction that the music represented the expression of authentic blue collar naturalism and a romantic sense of the uncluttered life of country existence. Clifton traveled widely the U.S, becoming a staple on the local radio broadcasts that were a feature of bluegrass music in the mountain regions and nearby cities in the forties and fifties, while meeting lots of important bluegrass early lights. Particularly important to him were developing and long-lasting relationships with Woody Guthrie and A.P. Carter. He brought the sensibility of a museum curator to his song collecting and, later, publishing efforts. Since Malone's writing characteristically, and with scholarly thoroughness, lists the call letters of as many radio stations as he can verify, as well as the naming members of many, or even most, of the bands Clifton picked up to accompany him at festivals or join him on short tours, the text often devolves into what seems to be a series of lists. Since this is both a legitimate approach for scholars and mother's milk for many people who take a curatorial view of performances, the approach is appropriate and useful. For the general reader, however, it sometimes makes reading of the book something of a chore. Nevertheless, the book is very enlightening regarding the career of an important figure in the popularization and spreading of a more urbane and less localized bluegrass music.

Regarding the early recordings in Clifton's career, Malone comments, “Like most bluegrass musicians, Bill could easily write and sing about cabin homes he had never inhabited, country churches he had never attended, and dead mothers to whom he had never been related.” On listening to his voice in his recordings (many of which are available on Spotify), I was intrigued by his clear, unaccented voice, which avoided trying to achieve a “country” accent while presenting the songs straightforwardly with clarity and genuine emotion. Clifton, throughout most of his life, preferred the old songs and continued to sing them. Later in his performing career, he allowed his repertoire to become more expansive. 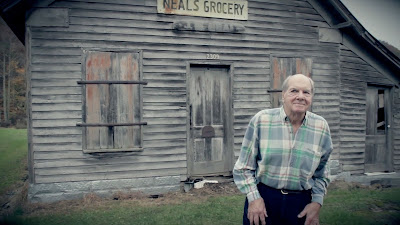 Clifton moved to England in 1963 to pursue old time, country and bluegrass full time. During this time, Clifton traveled and performed widely himself while introducing important folk and bluegrass artists like Doc Watson, Bill Monroe, and the Stanley Brothers to England. He promoted tours by Mike Seeger and the New Lost City Ramblers. His background, use of language, and social ease made it possible for him to move easily through British society while his knowledge of American roots music helped make valuable connections to England. He also spent three years as a project director for the Peace Corps in the Philippines. Later he made several trips to Japan and brought Japanese bands to the U.S. Clifton became a major force in helping to internationalize old time, old country, and bluegrass music. 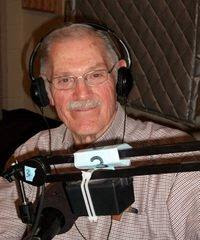 Bill C. Malone is a noted scholar, popular writer, and broadcaster. His doctoral dissertation was turned into Country Music, USA, the first academic study of country music. He is retired from Tulane University and currently lives in Madison, WI where he hosts a weekly country music show on public radio.

As Bill Clifton: America's Bluegrass Ambassador to the World by Bill C. Malone (University of Illinois Press, 2016, 184 pages, $19.75/995) progresses through Clifton's travels and his problems with money, a picture emerges of Bill Clifton as torn between his family and social obligations as the son of an important banking and brokerage family in Baltimore, MD and a somewhat conflicted itinerant musician and even counter culture personality who preferred staying on the road, playing music and helping people make connections. It cost him wives, and relationships with some of his children. Similarly, his scholarly work in collecting and performing old time bluegrass, country, and folk music were somewhat at odds with a sensibility open to a wide range and variety of musical styles and content. Thus, he emerges as a complex and conflicted person. Nevertheless, his importance in helping keep old time and early bluegrass alive and acting as an ambassador abroad in spreading the music worldwide is incontrovertible. Late in his career, Clifton was awarded a Distinguished Achievement Award by IBMA in 1992 and inducted in the International Bluegrass Music Hall of Fame in 2008. I bought the book as a digital download from Amazon.com and read it on my Kindle app.
Posted by Ted Lehmann at 11:29 AM