The Detective and the Chinese High Fin: A John Darvelle Mystery by Michael Craven - Book Review 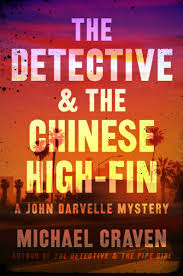 The Detective & the Chinese High Fin: A John Darvelle Mystery by Michael Craven (Harper Paperbacks, 2016, 336 Pages, $10.87/8.99) is a first person narrative from the point of view of the title character John Darvelle, a private detective who enjoys his job and is good at it. He practices the skills he needs by going to the gun range to practice, running and swimming to keep in shape, and sharpening his reflexes through playing ping-pong against the wall at high speed. Meanwhile, he brings his experiences and wide-ranging resources to bear on his cases.

The story begins with Darvelle being called to solve the mystery of what happened to the thoroughly unpleasant, elderly rich Mrs. Murial Dreen's engagement ring. This quickly solved job both introduces the reader to Darvelle and establishes some of his skills, both interpersonal and investigative, while opening the door to the larger mystery of the book. Darvelle receives a call from police lieutenant Mike Ott asking him to look into a cold case, the murder of Keaton Helton, a thoroughly unlikable son of wealthy parents who, after years of angering everyone he knows or is related to, is killed in his driveway with one shot. Every possible suspect has an air-tight alibi. Darvelle enters into a world he doesn't know and begins his investigation. Incidentally, the chinese high fin of the the title turns out to be a very expensive tropical fish. The plot is tight, the action convincing, and Darvelle believable.

As the complex plot develops, Craven explores elements of Darvelle's interests in side comments enriching the book. Target practice, mentors like Jim Douglas, who taught him to fight, and Marlon the Marlin a former mob guy, living out his dream on a boat he never leaves after retiring from the mob are colorful, well drawn characters who enrich the narrative. Keaton Helton's acquaintances (he had no friends) and family, all with solid alibis and reason to wish him dead, appear as human, truly angry, and innocent. John's comments enliven the story as he drives through the neighborhoods and small cities surrounding Los Angeles. His passion for Ping Pong, his love for swimming, his delight in small details all provide information about John Darvelle as a person as well as his work as a detective. They seem to be presented organically, without too much interjection from the narrator. I suppose that's why I favor first person narratives over third person, so-called objective. As the reader, I know and understand what's happening as it happens within the narrative. If he reflects on his background, experiences, and feelings, they seem to emerge from his present situation. All this contributes to good storytelling with narrative drive.

Michael Craven is the sort of detective fiction writer who hits a reader right at the opening and then keeps driving through the narrative. He reveals his plot and characters organically as the story emerges; there's no sense of artifice, of writerliness, or craft, just good story telling, which says that all the foregoing are included, but don't interfere with the story. That quality is scarce and turns good stories into wonderful experiences. While the story and the detective are nothing like any of Timothy Hallinan's characters, Darvelle reminds me of him. Darvelle doesn't take time with lengthy exposition, his descriptions grow from his experiences and the incidents he becomes involved with. He uses dialogue exceptionally well to reveal the situation and character. Darvelle is sharply drawn, likable, highly skilled, and a little quirky. His musings on life, his experiences, and his analysis of the story as it emerges come from within the character and never seem forced. 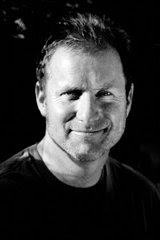 Michael Craven has been a freelance advertising writer and creative director serving many national accounts. He is the author of two previous books, Body Copy and The Detective & the Pipe Girl (the first title in this series), nominated for both the Nero Wolfe and Shamus Awards. Michael was born in New York City, grew up in Jacksonville, Florida, lived for many years in Los Angeles, and is now back in New York City where he lives and works.


The Detective & the Chinese High Fin: A John Darvelle Mystery by Michael Craven (Harper Paperbacks, 2016, 336 Pages, $10.87/8.99) does an excellent job of building a likable character and engaging him in an intriguing mystery. The plot is convoluted, the clues present but not obvious, a good distraction, as well as a surprising and satisfactory resolution. I've already bought the two precursor books to this one, and look forward to following Michael Craven as he further develops his character and his own skill. I bought the book at Amazon.com for reading on my Kindle app.
Posted by Ted Lehmann at 10:19 AM